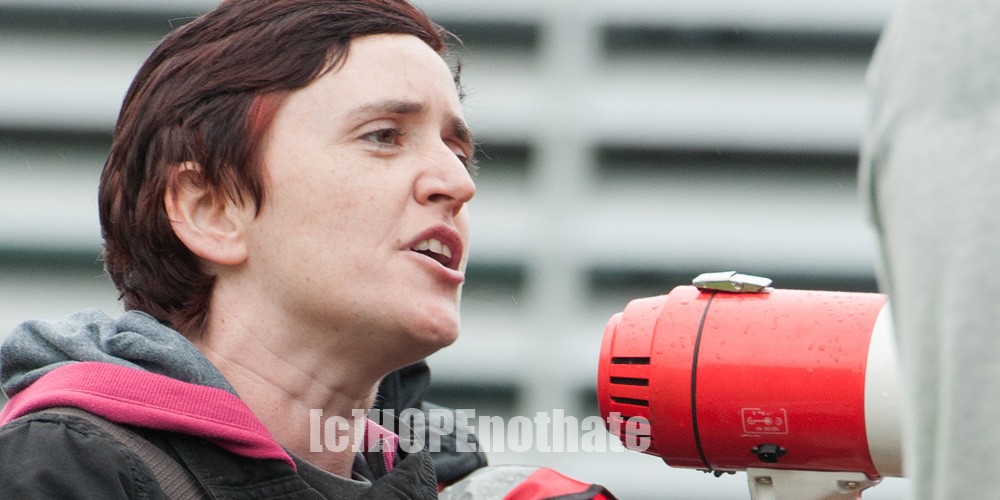 Waters has launched the anti-immigration ‘For Britain’ campaign following her deselection as the UKIP candidate for Lewisham East. Waters, a leading British ‘counter-jihad’ (anti-Muslim) figure, was dropped by UKIP’s National Executive Committee (NEC) after pressure from HOPE not hate and other media sources to disavow her.

According to Waters, her ‘For Britain’ speaking tour is “designed to encourage UKIP leadership to tackle the threat of Islam and Sharia”. Waters’ campaign is to take a staunchly anti-immigration stance.

“It is, I believe, a betrayal of a nation to invite a culture or people who may very well present a threat to the host society”, said Waters, going on to write that “white Britons are held to a separate standard than non-white groups or immigrants”.

“The rape, abuse, and humiliation of women at the hands of Muslim immigrants to Europe is too widespread to accurately record. Women of Britain did not spend the last century fighting for their rights, only to see them crushed now by immigrant communities.”

Division in the party

Despite her deselection as Parliamentary candidate, Waters is still active within UKIP, recently representing the party in the Wickford Crouch ward of Essex County Council, receiving 5.2% of the vote. “I intend to pursue pro-Britain policies within the party,” she wrote.

She has also, however, taken direct aim at Nuttall, blaming him for her deselection and savaging his credentials as a leader.

“If he is unwilling to listen to his members and the voters, then what future does he, and UKIP, have?” the For Britain website asks, stating that in the build up to Waters’ deselection, “the hashtags #SaveAnneMarie and #TeamAnneMarie show just how much support the counter-jihad UKIP activist has amongst regular UKIP members, and could signal Nuttall’s ultimate demise.”

Waters’ deselection has even prompted UKIP’s loudest cheerleader, Raheem Kassam of the far-right “news” outlet Breitbart London, to turn on his party.

“If UKIP ditches Anne Marie Waters, the party is over,” wrote Kassam last week. Other far-right figures to side with Waters include former English Defence League (EDL) leader Stephen Yaxley-Lennon (aka Tommy Robinson), who even claimed he was considering standing against Nuttall in the upcoming general election over the issue.

Unfortunately for Nuttall, Waters’ attack on his leadership has followed harsh criticism from within his own party for the radical anti-Muslim direction in which he has taken UKIP. In a scramble for relevancy Nuttall, who has a long history of making anti-immigration statements, has resorted to a platform which includes banning the face veils worn by some Muslim women, a moratorium on new Islamic schools, and a “one in one out” zero net migration policy.

By adopting such anti-Muslim postions, but also dropping a leading anti-Muslim activist after bad publicity, Nuttall has isolated himself from moderates and Islamophobes within his party. With a history of weak and indecisive leadership, Nuttall must now ponder whether he should rid his party of a toxic figure intent on undermining his leadership, or to tolerate her in order to placate the popular and vocal hardline elements until after the election but continue to enrage the moderates.

Nuttall has backed himself into a corner. Whether he can display a hitherto hidden resourcefulness and avoid the further splintering of his party remains to be seen.