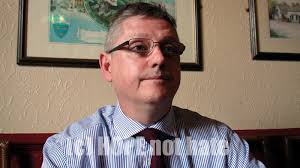 News is just coming out of Hungary – now confirmed, that Jim Dowson has been told to leave the country. According to the Ministry of Interior, the Hungarian Immigration Authority declared Dowson an undesirable individual in Hungary, who is not allowed to enter and stay in the country anymore.

We understand that Dowson was stopped from entering the country last week. It is believed the Hungarian government has been concerned for some time about extremists from across Europe moving to their country.

Dowson, who formed the far-right group Britain First in 2011 after leaving the British National Party (BNP), has been part domiciled in in Hungary since 2015. He and former BNP leader Nick Griffin have been encouraging far-right activists to move to the country and begin a new life.

German neo-Nazi Horst Mahler was arrested and detained there last week, having fled from Germany where he faces further jail time for denying the Holocaust. Mahler was advised (wrongly) that the Hungarian government would accept him.

We can also confirm, that rumours circulating last week that Mahler was being housed by Dowson, are completely untrue. However, the Mahler incident was probably the last step for the Hungarian Interior Ministry.

For details on the British far-right in Hungary, check our exclusive report from last year, and also the latest edition of HOPE not hate magazine which has an exclusive insight into the European far-right active in Hungary.