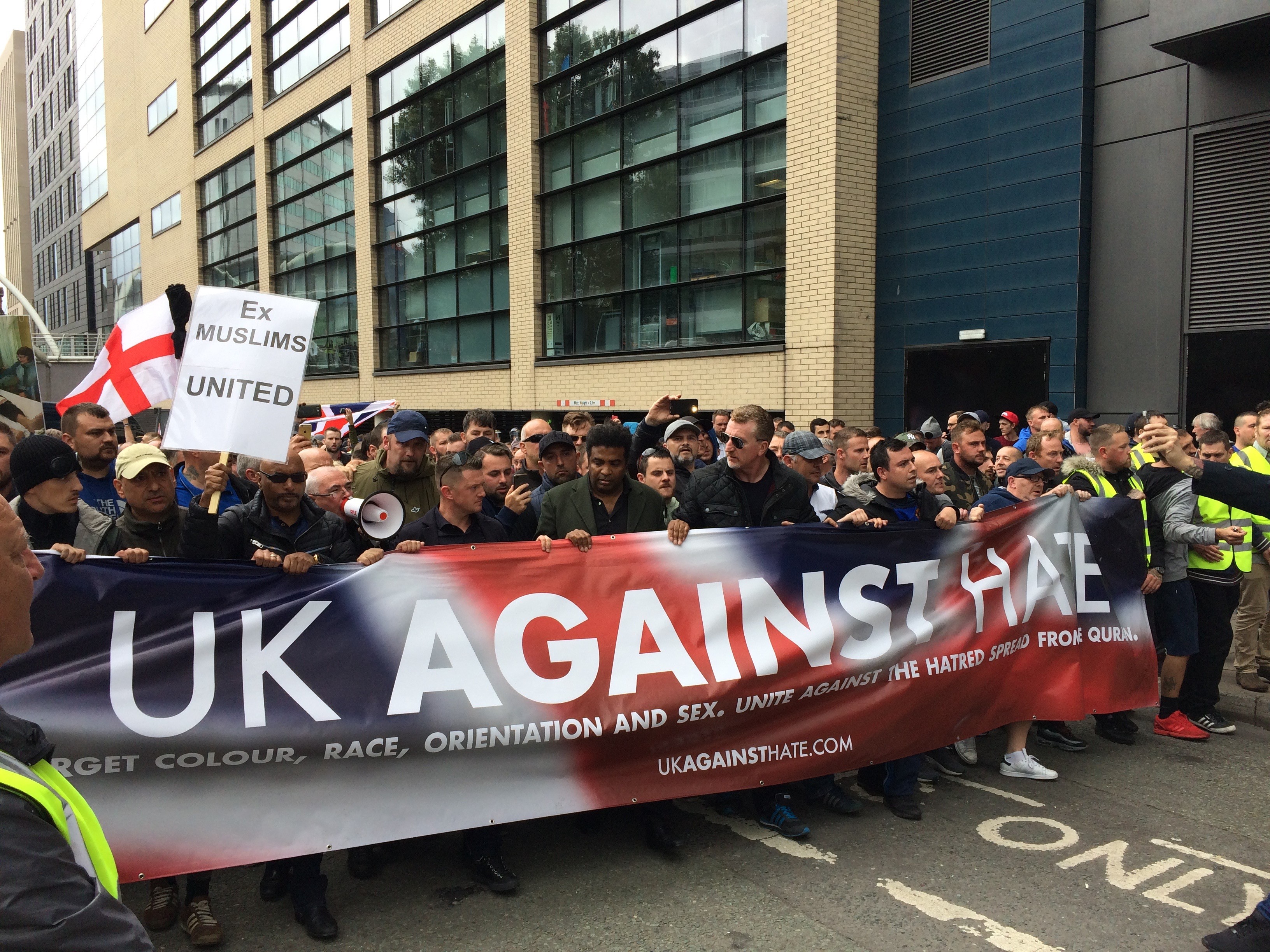 Possibly as many as 1–2,000 people crowded into Piccadilly Gardens creating scenes not seen in a British city centre since the heyday of the violent English Defence League (EDL).

The demonstration was first announced by Tommy Cook (aka Tommy English) under the banner of ‘Gays Against Sharia’ but was later rebranded as ‘UK Against Hate’ once former EDL leader Stephen Lennon (aka Tommy Robinson) stepped in and took control of the event.

With Lennon’s departure from the EDL back in 2013, the anti-Muslim street protest movement fractured into a number of regionally-based splinter groups, meaning the days of mass demonstrations came to an end. Lennon’s own efforts to launch a UK branch of the German anti-Muslim group Pegida was an abject failure and petered out after a few small and uneventful demonstrations in Birmingham.

Today, however, Lennon once again found himself leading a procession through the centre of a British city.

Speaking from the stage, former Pegida UK speaker Mohammed Fiaz bellowed: “This isn’t the EDL, it is UK Against Hate”.

Yet to all intense and purposes there was no difference. As well as old EDL faces like John Banks making an appearance, Lennon’s cousin and former deputy leader of the EDL, Kevin Carroll, returned to his side for the first time in years.

There was also a strong contingent from Lennon’s failed Pegida project, with former press secretary Jack Bucky, also of the anti-Muslim ‘counter-jihad’ political party Liberty GB, in attendance (sporting rather natty red trousers). One of the biggest cheers of the day was reserved for former Pegida UK leader Anne Marie Waters, of the anti-Muslim Sharia Watch UK, when she announced to the crowd her intentions to stand as leader of UKIP (which recently deselected her as a candidate at the general election).

Not all good news for Lennon

While the impressive numbers will no doubt have been a relief to the organisers, Lennon may well be a little conflicted. Over recent years he has talked about his embarrassment and regret at the yobbish and violent behaviour of the EDL, hence why he tried to replicate the more respectful Pegida model (where thousands of German Pegida members soberly marched in silence through the streets of Pegida’s birthplace, Dresden).

Today, despite the organisers’ efforts to facilitate a silent march, they failed. During the supposedly silent procession there was chanting, singing and drinking. Before the march and during the rally there were scuffles with the police, confrontations with counter-demonstrators and bottles and bangers thrown.

Today’s scenes in Manchester were a far cry from Pegida in Dresden. In fact, there was little to distinguish today from the EDL demonstrations of old, which Lennon has been so keen to distance himself from in recent years. He now has a decision to make. Clearly, if Lennon wants it, he can pick up exactly where he left off with the EDL. Much of the crowd hero-worship him and many will gather round to shake his hand or have a picture taken together. At the muster point under a bridge near Manchester Piccadilly station his name echoed around the cavernous tunnel and he clearly loved the adulation.

Yet as today made abundantly clear, his dream of a respectful and respected large scale protest movement remains a pipe dream. As he spoke from the stage people jumped on the top of portable toilets, balaclava-clad men waved flags, rows of metal fences were ripped down, statues scaled and bottles flew through the air in the direction of the counter-demonstration. Lennon may be able to lead these people but he can’t control them. Despite his past complaints about EDL violence and extremism, Lennon has himself been engaging in increasingly provocative and extreme behaviour of late, including turning up at the homes of political opponents. Today is just further evidence that any previous claims to being penitent for his behaviour while leader of the EDL were disingenuous and he now seems happy to return to leading an EDL-style organisation, violence and all. Whether today was the start of a ‘new’ anti-Muslim protest movement of note or whether the large numbers were merely the result of quite understandable anger in the wake of the tragic terrorist attacks, only time will tell. Lennon finished the event by announcing a demonstration in London on 25 June which will go some way to answering that question.