Plans for nothing come to the fore 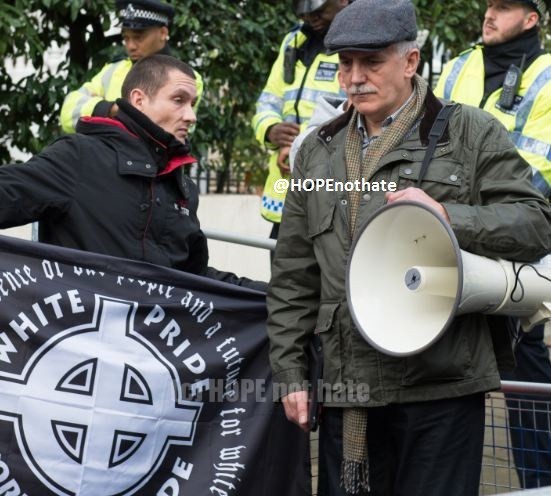 Larry Nunn is a man born after his time.

He longs for a time when the white man was the most important and powerful being on God’s earth. Oh, hang on…

Nunn pines for a day when he is the most important white man on this earth. And any other earth, probably. He wants to be higher than the ants, whiter than the Polar Bears etc, etc.

You get the picture.

Sadly for Nunn, he was not at all important when the Nazis were doing well at the polls in this country some ten years ago.

Back then, he couldn’t even buy a seat at Nick Griffin’s table. And let’s be honest, when Nick Griffin was leading the British National Party (BNP) up and down the electoral path, he was willing to buy magic beans from just about anyone. Except Larry Nunn.

Whatever the cause of this slight against a former candidate and organiser, since the BNP’s demise, Nunn has held a bitter resentment about just how little part he played in the party’s growth.

Sure he stood in elections for them and gave pithy quotes to local papers, but if we had heard of him back then, we would have called him Larry “nobody” Nunn.

Ten years on from the BNP’s near one million votes at the European elections, that party is now happy being dead but cash rich.

Nick Griffin has gone and so too have thousands of people who fell in with a project that would (they hoped) one day ship hundreds of thousands if not millions of non-whites off to foreign lands. This would then allow the white men and women of England to get on with their vegetable patch, warm beer, inbreeding and eugenics.

I’m talking about the idea of an all-white Britain (but they’d just call it England anyway).

Yes, those mythical white feet would one day walk upon England’s green and pleasant lands, unpolluted by progress and fluoride. The curry shop – an affront to patriots everywhere – would be replaced by English shops. These would hand out English Viagra to amorous white teenage boys (to ensure they outbred the colonies) and baked scones laced with date rape drugs for them to feed to pretty young English girls in summer frocks.

By any means necessary, the white race would survive and prosper and England would shine like an eighteenth century beacon to the rest of the world.

Every white man would ride a plush Germanic horse and cart whilst the fair English maiden would push a pram from the moment she could walk, over brimming with glorious white children. Again, you get the picture…

THE MAX FACTOR: A COSMETIC COVER

Now, back to Larry Nunn. Since the BNP’s demise, Nunn (who uses the name Max Musson) has put lots and lots of money into daft ideas to make him important.

What with the London Forum having an extended hiatus, Nunn has been very busy trying to find other avenues to buy success. A particular favourite of his is to host “leadership” conferences, where a bunch of white people get wankered over a plate of chicken and talk about how to save the white race from wankers like themselves.

Larry foots the bill for this, so you get a fair idea just who the leader should be.

Old Mr Nunn’s Aryan body clock does tick-tock at a pace unrivalled by anyone else, anywhere. I’ll probably be going into further detail about his time trying to persuade National Action to take over the National Front for him in a month or so, but it’s fair to say Nunn wants no more white men or women wasting their time at the ballot box.

“When nationalist political parties contest elections, we are grossly and unfairly demonised by the media and portrayed as hateful individuals who are alleged to have psychopathic tendencies and who if we were ever allowed to acquire power are likely to commit genocide as a result of our alleged irrational hatred of minority groups.”

Which is a fair acknowledgement. And true on all counts.

“If we are to acquire the political power needed to prevent being dispossessed and race replaced, by the traitors at Westminster, we must concentrate our efforts elsewhere and pursue a non-electoral strategy designed to change the balance of power. Once we have achieved this, once we have ‘levelled the playing field’ somewhat, we might then have the influence needed to pressure the establishment into conducting elections fairly, or at least more fairly than today. Electioneering might once again become a viable proposition.”

The way I read it, is that ‘levelled the playing field’ reads somewhat like people like Nunn and his mates committing genocide to minority groups! But there you go. What do I know?

Nunn has now taken his ideas to the top-secret ‘Nationalist Unity’ group on Facebook. From there, he has helped purge all the National Front members who were there only to complain about it.

To be honest, one can hardly blame the group’s administrators for purging the NF. There’s only so much one can take of Kevin Layzell sending coded love messages to Jordan Pont, anyway.

Nunn has also held another one of his “leadership” conferences with key figures from the Facebook group in the hope that, somewhere, among all the plush Egyptian cotton, toiletries and lager tops these conferences have to offer his fanboys, one of them will declare Nunn leader.

Well, guess what? It happened last weekend. And it was glorious.

According to the little we know, Nunn’s Facebook family met in secret to discuss the “parlous state of our movement.” And it got better: “During the conference, delegates discussed a wide range of issues relating to organisational structures and funding methods, and we identified the strategy that offers us the greatest potential to achieve power.

This strategy, designated the ‘Homeland Project’, should not be regarded as some kind of ‘quick fix’ however, as it will require the active and determined involvement of all racial nationalists over many years.”

Yep, the Facebook fanboys are going to build themselves a ‘White homeland.’

You could not make it up. Peter Hollings who runs the Facebook group for homeless Nazis has declared Nunn the person who can best spearhead an idea to put all the ‘Racial Nationalists’ in one bin. According to him, there are two defining principles for what they believe:

1) That our racial integrity must always be protected against contamination by non-European elements; and

2) That our homeland is for ourselves alone.

“Non-European elements” is code word for non-whites. Any redneck from the USA or Australia (non-European countries) will be most welcome at the ‘White Homeland’ when or if it ever does get built – as long as they are white.

This is not the first time British Nazis have tried to get a ‘Homeland’ going.

During the 1980’s, sections of the National Front moved to an old church in rural France to start their own ‘Homeland.’ After two years, the five blokes who went still had not managed to get themselves pregnant and produce any beautiful Aryan babies, so they gave it up.

In the 1990’s, some members of the wannabe terror group Combat 18 tried to move to a pub in Essex and start their own Homeland.

They got as far as living in mobile homes on the outskirts of a village they wanted to take over but there was some kind or argument over who would be the postmaster and so they decided to murder each other instead.

We also mustn’t overlook Gary Raikes, hilarious attempt to create a (near) Highland Hitlerdom. His ‘Quiet Revolution’ turned out, in fact, to be silent, a Raikes lack-of-progress.

Most recently, National Action toyed with the idea of moving to West Yorkshire en masse because this is where they thought they, the “officer class”, could direct the coming race war. It looks like some of them made it no further than Swindon or HMP Chichester.

Why these people always want to live together is no mystery. The far-right in this country hold no talent or place in the modern world- few succeed in it, fewer even belong in it.

Their dystopian ideas about the future world read like a plot from ‘The Walking Dead’ but in this case, the zombies have taken over and they sit around in empty buildings drinking cheap lager and eating custard creams. This  is what they believe made white people so great.

Between them, few of these Nazis have even the bus fare to get to this mythical Homeland, let alone build one or occupy it.

Larry Nunn, who now has the job of spearheading the ‘White Homeland’ at least has the necessary cash to do so.

Perhaps it will be on the lawns of his mansion in this perceived Homeland that the great unwashed horde of fascists will gather every night awaiting his every turgid word.

Because that is what it really is all about. Not fit for the modern world, Nunn will be King of nothing, one day.