GRIFFIN’S RETURN HOLDS REMINDERS OF PAST AND FUTURE FAILURES 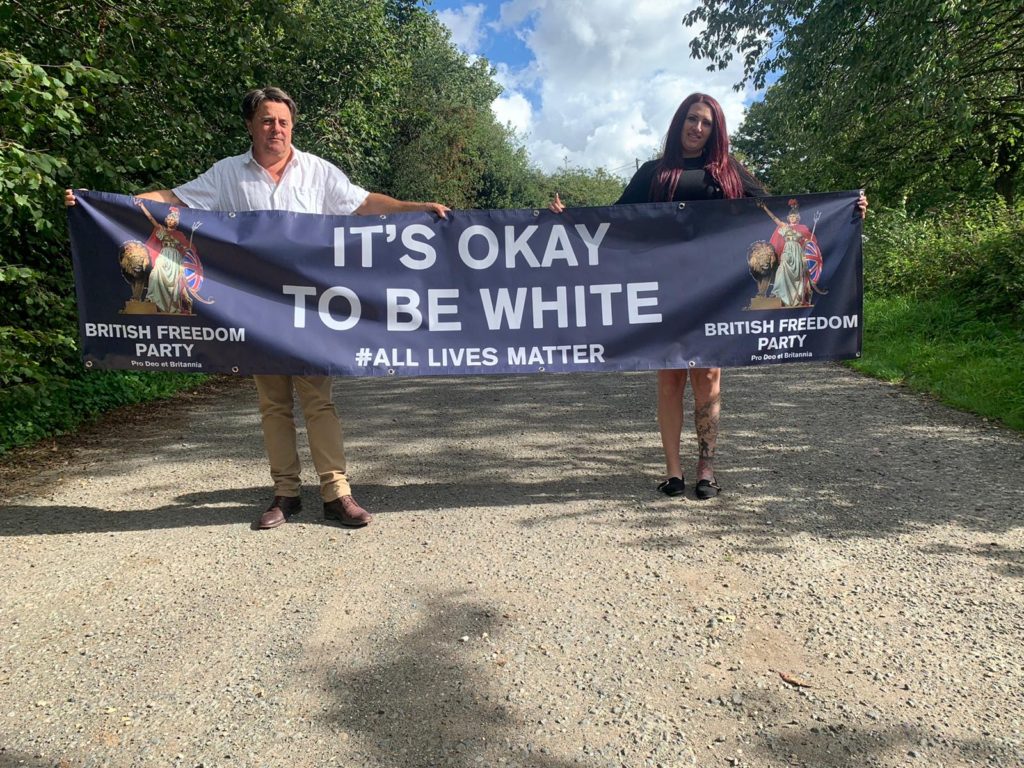 Nick Griffin has finally committed to a return to British politics.

Three years in the making and wrangling, Griffin has finally settled with the role of ‘Editor’ of Britannia, thealready sporadic periodical of Jayda Fransen’s venture, the British Freedom Party.

This is hardly a spectacular return and it is not the return Griffin and his band of followers envisaged for him, but there were few other avenues open to the most successful leader the British far right has ever had.

The former MEP and leader of the British National Party (BNP) is in no small way responsible for the mess, disorganization and disarray on the British far right overseen by many of his former acolytes. Such had Griffin dominated the British far right- in swings and bouts of success and failure that none who swore to carry on after his acrimonious departure have been able to either emulate Griffin or creep from under his shadow. Inasmuch, Griffin is as hated as he is genuinely feared by the miniscule parties that have tried to fill the massive hole left by the collapse of the BNP.

politics of the far right have managed to simply drive it back to the fringes or to comical but dangerous excesses.

Now 61, Griffin has been a significant but controversial figure on the British far right for forty years.  During the 1990’s he usurped the BNP’s long established though stuffy leadership to take hold of the party and drive it like a juggernaut into the political mainstream.  Such was the iron grip held on the party by his predecessor that in retrospect, perhaps only being elected as leader of the North Korean Workers Party would have been a bigger feat.

Griffin’s humiliations led he and a small band of supporters out of the United Kingdom in search of their new Jerusalem. Russia, Lebanon, Syria, Belarus and Serbia were temporary boltholes or avenues investigated for potential funding, friendship and reformation. There was even a very brief flirtation with Britain First (BF) as the two joined forces to scour Eastern and Central Europe for bedfellows and funders.

It was after a trip to Lebanon where Griffin was to tell Britain First’s Paul Golding that the indiscriminate “Muslim-hating” of BF was bad for business. Golding has seemingly failed to grasp Griffin’s nuanced advice.

It was Hungary where Griffin and similar minded fascists finally found their home from home and it was there in a small hub established in the capital and with Hungarian politicians we once more witnessed Griffin’s lust for grandiose schemes and scheming once more come to the fore;  going as far to envisage- among other things, a large scale import of (white) South African (Boer) farmers.  Treated as some kind of deformed statesman as he trawled through parliamentary meetings of an array of tiny opposition parties, It was also evident that on his travels Griffin had once more found himself engaging with clerical fascism. Other than that, Griffin spent the rest of his time in Hungary posing for ‘selfies’ with British tourists and whipping up anti-Jewish sentiment.

Asked to leave Hungary in the middle of 2017, Griffin dined with the leaders of Generation Identity in central London to see if there was common ground. The meeting broke up with neither side overcoming their mutual suspicions of one another and apparently,  Mark Collett hiding around the corner too ashamed to confront his former friend, but still baiting and insulting him electronically.

It’s Collett’s Patriotic Alternative where Griffin’s personal politics would feel better at home. While Collett still refuses to shake Griffin’s outstretched and forgiving paw, the other avenues of joining an organised party are all firmly closed.

Anne Marie Waters’ For Britain Movement is out of the question and the National Front and BNP too moribund to contemplate- plus both have branding Griffin has already sullied.

Trouble for Golding and Britain First?

Griffin’s decision to link up with Fransen holds considerable antagonisms for Britain First.  Despite being the acknowledged victim of Paul Golding’s violence when she was in BF, Fransen has sunk almost without trace since losing most of her worldly goods and moving to Northern Ireland. In Belfast she has fallen under the tutelage of Griffin’s former consiglieri, Jim Dowson.

Dowson, Fransen and Griffin could form a powerful trifecta against Golding, although as the Nazi periodical Heritage & Destiny points out, Griffin and Fransen are almost polar far right opposites politically. The magazine describes Griffin’s new role as “beyond a joke” and linking up with Fransen as another “flag of convenience.”

Under Dowson, Fransen has been championing populist theories around figures like Winston Churchill and the Royal Family. Grffin is on recent record of describing Churchill as a war criminal, and both he and Fransen have significant differences on how they view the Second World War. His views on Israel in particular will hold no weight either in the Loyalist circles the ardent Catholic Fransen has also been trying to cultivate.

Deciding as she has to pursue the idea of printed media in the age of complete internet saturation by the far right makes Fransen’s tiny operation attractive to Griffin. His talents are far more suited to typewriting, typefaces and cut and pastes than they ever were to modern media. Who could forget his plans to save himself in the BNP fell foul when he was unable to send a factional email to party supporters?

Griffin’s writing another repeat of history

Griffin will also bring not insignificant support with him from former BNP types who have hankered for him to return to frontline politics. Not everyone was as anti-Griffin in the BNP as his purging at the time declared. His current supporter base runs into a couple of hundred which would make them, if they oblige, already a significant size.

Internal troubles this week for Collett’s party will be music to Griffin’s ears.  Suffice to say it probably won’t take much for him to drag Fransen kicking and screaming with him into a full-front assault and an abandonment of her carefully-crated clerical Conservatism. And as everyone knows about Griffin and his flags of convenience, every time he launched and re launched his politic life, it has been as the editor of the party publication