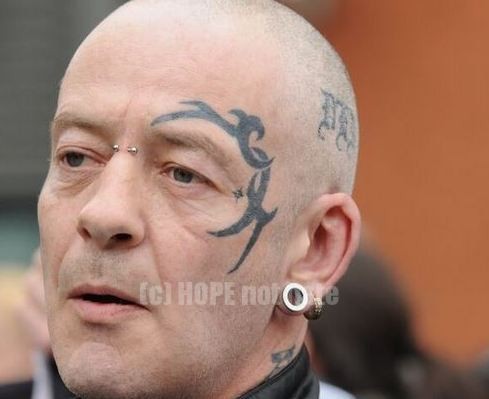 The death of National Front (NF) stalwart Nigel Sullivan has sparked a fresh round of infighting among the party’s few remaining members.

Sullivan, of Scarborough, died last October in Hull prison. Also active in Blood & Honour, he had just started a 13-year sentence for an attempted robbery in which a 65-year-old woman was hit over the head with a stick.

Despite the despicable nature of his crime, long-term NF associate Mike McCuster, is still keen to defend his pal’s honour. McCuster (left) celebrated his 50th birthday over the weekend. To mark the occasion he took to Facebook to remember his “true friend and brother” and post a wretched musical tribute by neo-Nazi band, Pitbull Farm.

He ended his tribute by asking friends to “raise a glass or horn” to Sullivan as his 50th birthday gift.

This did not go down well with fellow NF member Joe Hilton who swiftly labelled Sullivan as “scum.”

He also made a number of unsavoury allegations about Sullivan which went beyond his involvement in the violent assault of female pensioner.

These included the suggestion that he beat his wife.

We won’t detail the other, even more disgusting claims but suffice to say that they were hardly a well kept secret in NF circles. That much is clear from this latest spat.

But despite this no action was taken by the party to investigate or discipline Sullivan.

Indeed the heavily tattooed white supremacist was welcomed by the similarly inked McCuster, the NF, North West Infidels and others. Among many demos he attended was the 2013 White Pride Day in Swansea. Fletcher was later jailed for sporting a KKK gown and hanging a golliwog doll at the event.

No-one emerges from this sorry saga with any credit. Even Hilton, who is the most strident in attacking McCuster’s reverence for Sullivan, took an astonishing two years to realise his pal was a “wrong un”.

During that time, if the allegations made against him are correct, then Sullivan committed violence at least as bad as that inflicted on the innocent pensioner he and his teen accomplice sought to rob.