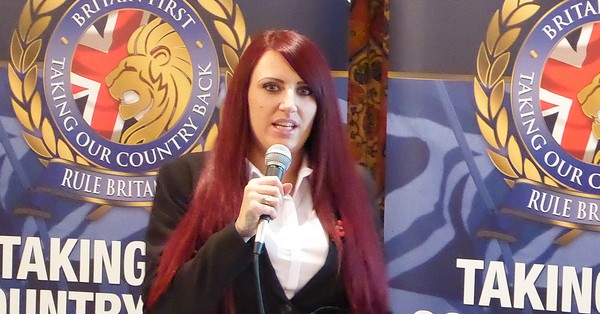 While still small, Britain First is the most prolific anti-Muslim street movement in the UK, best known for its extreme, controversial and confrontational actions, such as street protests and mosques invasion.

For more about Britain First read our Hate File on the group that includes a downloadable version of our extensive report Britain First: Army of the Right.

Jayda Fransen, whose tweets Trump retweeted, is one of the leaders of Britain First and and one of the most controversial figures on the UK far-right.

A former recruitment consultant from Anerley, South London, Fransen is now deputy Leader of Britain First (BF). Her outspoken stance on Islam and her prominent role in BF has made her an increasingly important figure on the British scene.

She is a dedicated Roman Catholic who studied Law while working for a now defunct firm of conveyance solicitors in Forest Hill. Importantly she has been one of those responsible for injecting the group with its religious zeal, believing strongly in invasion and crusader narratives. The deeply disturbing videos show a man being pushed of a roof and killed, a man breaking a statue of Virgin Mary and one shows a young man on crutches being physically abused.

The videos first emerged on a Dutch video sharing website in May and the perpetrator as well as the person behind the camera were arrested shortly thereafter. However, the video started to make its rounds on far-right websites, including the world’s largest neo-Nazi website, Daily Stormer. UPDATE: a report is circulating on Dutch news NOS that “they found the guy from the video and it’s not a Muslim nor a migrant.”, further bringing into focus the clear anti-Muslim agenda pushed by Fransen and amplified by Trump.

Huge questions remain about how Trump came across Fransen’s tweets but it it true to say that her following on social media has exploded this year jumping from just 13,000 in March to over 54,000 today. Her growth is covered in our new report, published yesterday, Bots, fake news and the anti-Muslim message on social media.

Britain First: Dysfunctional, Dangerous and in our Communities
Right Response