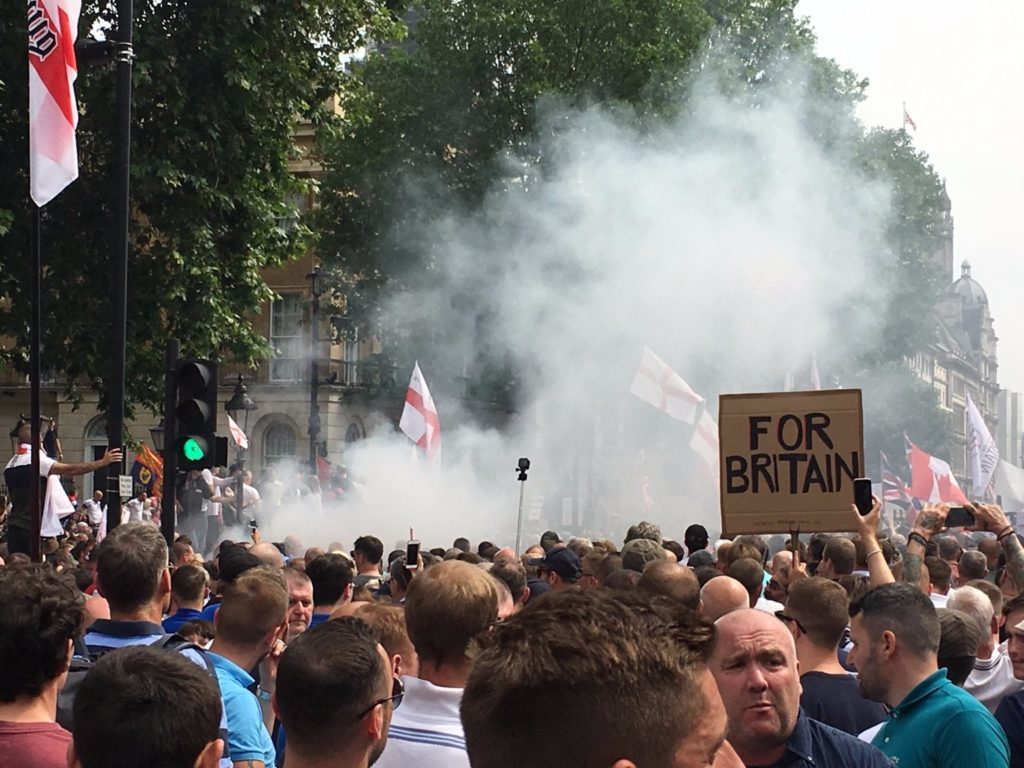 Since his guilty plea and subsequent jailing for contempt of court, Stephen Yaxley-Lennon (AKA Tommy Robinson) has received support from across the North American far right and anti-Muslim scenes.

The right-wing conspiracy theory channel InfoWars, on which Lennon has appeared numerous times, has broadcasted reports from his team and its figurehead, Alex Jones, has referred to Lennon as a “political prisoner”. Donald Trump Jr., Mike Cernovich and The Gateway Pundit’s Lucian Wintrich have all spoken out in defense of Lennon.

ACT for America, Brigitte Gabriel’s anti-Muslim organisation – which claims to have 1,000 local chapters across the USA –  told its email list that Lennon’s case meant that “free speech is under attack”. Major right-wing channel Fox News has also chimed in with Tucker Carlson giving Lennon’s case significant airtime on his show. However, it has emerged that Lennon has also been receiving significant financial assistance from across the Atlantic, receiving money for legal help from the Philadelphia-based organisation the Middle East Forum (MEF), led by Daniel Pipes.

Worryingly, MEF also claims to have held an “organizing and funding” role in both today’s protest and the previous protest in June, which was marred by violence and vandalism and saw nazis and other antisemites among the crowd.

Despite Lennon’s guilty plea, the Philadelphia-based MEF have outlined their material support for him personally and for the recent ‘Free Tommy’ demonstrations. In a blog titled ‘MEF Organizes 25,000 Strong Protest in Support of Tommy Robinson; Plans Additional Rallies’, published last weekend, they claimed to be pressurising the UK government and supplying him with legal funds via its Legal Project.

MEF was founded in 1990 by Daniel Pipes – an influential and “respectable” figure in the American ‘counter-jihad’ milieu – as a neoconservative think tank on Middle Eastern affairs. MEF campaigns against Sharia law and the supposed “Islamisation” of the United States.

MEF launched the Islamist Watch website on 21 April 2006 and the Legal Project (LP) in June 2007, which raises and distributes funds for ‘anti-Islamist’ authors, activists and publishers who face defamation lawsuits. One such recipient of funds was the infamous Dutch Islamophobe Geert Wilders, who spoke at the demonstration in June in support of Lennon and has a recorded speech to be broadcast at today’s event.

MEF’s blog claims that they “provided all the funding and helped organized the first “Free Tommy Robinson” event held June 9 in London.” The event in question attracted around 10,000 people and saw police officers being chased and attacked near Trafalgar Square. Sections of Lennon’s supporters also hurled metal barriers, bottles and street signs, injuring five people and resulting in the arrest of nine.

Despite this, the MEF also decided to once again contribute to the funding and organizing of today’s Free Tommy demonstration in London, writing that it was arranging for US Congressman Gosar to speak at the rally. Gosar has previously courted controversy when, in an interview with VICE News, he suggested that the August 2017 alt-right Unite the Right rally in Charlottesville, which led to the murder of counter-protester Heather Heyer, may have been organised by an “Obama sympathiser” and raised the possibility that it may have been funded by Hungarian philanthropist George Soros. Gosar also accused Soros of having “turned in his own people to the Nazis”.

That the MEF has funded such an enterprise is no great surprise. Its Education Fund has distributed around $2 million annually to groups or individuals who are working to promote MEFs goals, with noteworthy recipients including controversial Islamophobic organisations such as the Danish Free Press Society, Dispatch International, Center for Security Policy, and the David Horowitz Freedom Center.

In October 2016 Pipes spoke at the “Dangerous Words 250” conference alongside British anti-Muslim activist Anne Marie Waters. Since the conference Waters has become even more extreme.

Despite this, Pipes provided the foreword to her new book. Whilst he outlines his disagreement with Waters over her belief that “Islam and Islamism” are not distinct (Pipes states that, unlike Waters, he does believe “in a moderate Islam”), he also writes that “”Londonistan” has the bleakest prospects of any Western country”, due to the lack of what he calls a “civilizationist party (because it seeks to save Western civilization)”. Pipes writes that Waters “has the biography, skills, knowledge, and will to found a civilizationist party. Indeed, she initiated the process in late 2017 by establishing For Britain, a party “for the forgotten majority”.

HOPE not hate has exposed members and candidates of Waters’ party The For Britain Movement engaging in appalling racism, and others who are former activists of the British National Party (BNP) and even a former member of the nazi organisation National Action, now banned as a terrorist group.

Also offering Lennon assistance is the far-right Canadian alternative media platform Rebel Media, a former employer of Lennon, which has jumped to his defense.

Ezra Levant, founder of Rebel Media, wrote in an article:

“The day he was arrested, I spoke with Tommy’s wife and his lawyer, and offered to help in any way. […] I offered to help again, and Tommy’s family and lawyer were grateful, but they have asked that we hold off doing anything (including crowdfunding) until they can have a proper conversation with Tommy.”

Levant still launched a fundraising appeal, claiming it was for the legal costs to challenge the reporting restrictions that were in place at the time.

Rebel have a UK company – Rebel News Network UK Limited – and claim to have hired the lawyer, Daniel Berke. However, local paper LeedsLive claim credit for successfully challenging the reporting ban, and so it is unclear whether Rebel actually played any real role in having the restrictions lifted.

Levant also concocted a “Tommy Robinson chant” ringtone that can be accessed after signing up.