UNDERSTANDING COMMUNITY RESILIENCE IN OUR TOWNS

The project aims to better understand what makes a place confident, optimistic and open, and to help towns across England and Wales to fulfil their potential. We want to address the root causes of hate, to stop divisive narratives from taking hold in the first place. And we want to promote policies which champion the value of towns, and stress that every town matters.

1
Addressing the challenges faced by towns is central to neutering the far right – and to tackling at source the factors which enflame hostility to migration. As the country looks to rebuild following the coronavirus pandemic, there is an urgent need for a ‘towns moment’.
  
2
The socio-economic sea-change is reflected in attitudes to migration and race, where local tensions are likely to occur, and where the populist radical right is able to take hold. It is now in smaller places, away from the centres of big cities, where the risk is most acute.
  
3
Wealth, infrastructure and industry & cultural investments, continue to be concentrated in core cities. The populations of towns are getting older, generally less diverse places with less history of migration.
  
4
Towns are not a proxy for ‘left behind’. Each has a different geography, population, and history, and not all are feeling the effects of deindustrialisation or geographical isolation.
  
5
To address the towns challenge, we believe there are 5 key strategies: adopting a more joined-up approach, establishing towns as the primary unit, deploying targeted policies at the national level, sharing expertise and best practice, promoting an ‘every town counts’ ethos.
  

HOPE not hate was established on the premise that when people are given a choice between hope and hate, they choose hope. The far right take root where hope is lost. They exploit people’s fears and frustrations, offering simple answers to complex problems in order to stir up hate and division.

Our fight against the far right has often occurred at the ballot box – such as with the British National Party in 2000s. Yet we have also seen the same patterns emerge ten years later, as figures like Stephen Yaxley-Lennon seek out deprived northern council estates to sell their hateful politics.

Each time hate has lost out to hope, with the decline of the electoral far right in the UK, accompanied by dwindling support for street movements. However, the anger and disaffection which these groups both exploited and catalysed has not disappeared, and neither have the underlying problems.

Immigration and multiculturalism have become a focus for grievances felt in many communities. But there are deeper feelings of resentment as well, towards a distant political establishment and an economic model that is unfeeling to place or people.

Our 2018 report, Fear, Hope and Loss, mapped attitudes in England and Wales. It starkly laid out how a feeling of loss, a lack of opportunities and economic decline in post-industrial and coastal towns was creating pockets of hostility.

In the National Conversation on Immigration, meanwhile, we found that immigration was seen as a national issue, passed through a local lens. Localised pressures or points of tension could often spill over into anti-migrant sentiment in places with little history of diversity. Sometimes, these were directly related to immigration, such as in neighbourhoods overwhelmed by large numbers of houses of multiple occupancy for a rapidly growing population of migrant workers. But often they were not about migration at all, and instead reflected of broader resentments – about housing, healthcare, or a lack of secure employment.

This context is by no means unique to the UK. Across the world, we have seen the rise of populist politicians exploiting the consequences of decades of uneven economic growth and political disillusionment. We know that unless some of these underlying conditions are addressed, people will continue to feel this way, and the potential for a populist right to take hold will remain. We need to not just respond to the manifestations of resentment, but to treat the causes.

While no town is the same, in many ways this is a ‘towns issue’. Wealth, infrastructure and industry, as well as cultural investments, continue to be concentrated in core cities. The populations of towns are getting older, as younger graduates leave for cities to find work. Towns are, on the whole, less diverse places with less history of migration, where people are less likely to have meaningful contact with someone from a different background to themselves.

Moreover, the coronavirus outbreak looks set to deepen these divides. While the full economic impacts of the pandemic are yet to be seen, many of the industries most at risk of job losses are in coastal towns or rural areas – places struggling as a result of physical remoteness and seasonal tourist economies.
With this said, a central message of this report is that no two towns are the same. Towns should not be a proxy for ‘left behind’. Each has a different geography, population, and history, and not all are feeling the effects of deindustrialisation or geographical isolation.

Definitions of integration or community cohesion have, over recent years, moved away from unrealistic assimilationist views of conformity. They have moved towards an understanding that living well together must be a ‘two-way-street’, requiring effort both from newcomers and from receiving communities.

This means creating places that are confident, optimistic and welcoming – ensuring that everyone can access opportunities and feel more in control of their own lives. Issues like good public transport, secure jobs and decent housing all have a big social impact.
These are cohesion issues too. Getting them right means that resentments are less likely to form in the first place, and that it is harder for hateful narratives about immigration and multiculturalism to take hold.

This report aims to take a ‘place-based’ approach, so as to better understand how to build cohesive communities across Britain’s towns. To achieve this we delve down into the issues which make certain towns more vulnerable than others to divisive narratives – and into the countervailing factors which build resilience.

We define resilience as:

Through developing a towns index – an extensive inventory of the UK’s towns, bringing together well over 100 data variables for all 862 towns across England and Wales – we have created 14 ‘clusters’, each representing a set of resilience challenges faced by some towns but not by others.

These clusters of characteristicsrange from ‘shrinking and ageing’ populations to economies experiencing ‘competition for resources’. Many towns fit into several of these groupings, hence resilience is particularly difficult to achieve. The clusters help us to separate out the multitude of challenges that different types of place face when fostering resilience, in order to develop more targeted solutions. They also offer a route-map, through which we aim to develop networks of towns struggling with similar challenges, to share lessons, establish best practice and build resilience.

There is of course, already a lot of good work in towns to be built on, which this report aims to support. This ranges from community groups to dedicated local authorities to positive ideas for ‘levelling up’ from national government.

Ultimately, this report guides our Hopeful Towns project, setting a pathway for thinking about confident, optimistic and inclusive identities in Britain’s towns. Our next step is to begin the creation of a Towns Leadership Network, to support towns locally by sharing knowledge, expertise and best practice, while also working to push for change at the national level.

We want to address the root causes of hate, to stop divisive narratives from taking hold in the first place. And we want to promote policies which champion the value of towns, and stress that every town matters. 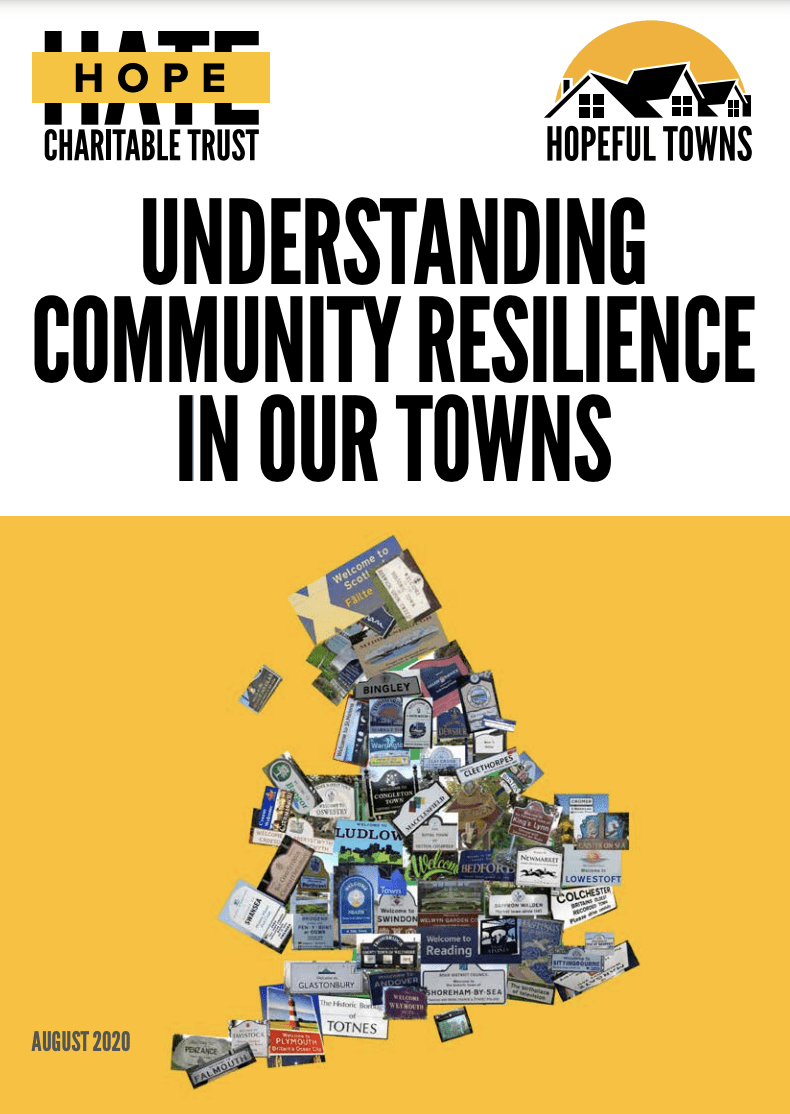 UNDERSTANDING COMMUNITY RESILIENCE IN OUR TOWNS

You can read more from the HOPEFUL Towns team here: https://www.hopefultowns.co.uk/