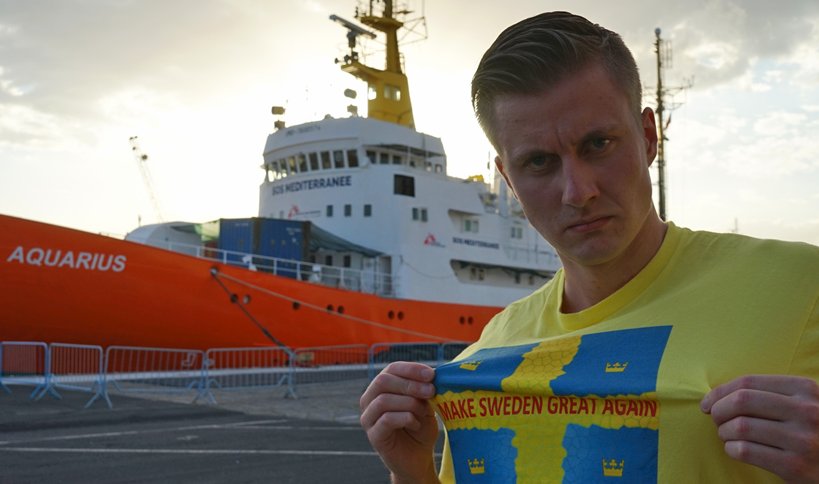 ‘Peter Sweden’ recently gained notoriety after right-wing columnist Katie Hopkins posted a selfie with him on her Twitter account – a sign of his growing fame in far-right circles.

At the time of the selfie, ‘Peter Sweden’ and Katie Hopkins – whose demonisation of migrants is well-known – were both in Sicily to give favourable media coverage to the far-right project known as ‘Defend Europe’, a plan to hamper search and rescue missions in the Mediterranean, something which HOPE not hate has covered and continues to cover extensively.

Hopkins later deleted the selfie without explanation, after critics pointed out that ‘Peter Sweden’ was, until very recently, on record denying the Holocaust, saying “Hitler had some good points” and pushing antisemitic conspiracy theories.

This was in addition to spreading racist myths about migrants and sexual crime and other far-right memes on his Twitter account and as the reporter for the anti-immigration account Voice of Europe, as well as on other right-wing platforms such as Paul Joseph Watson’s YouTube account.

After his record of antisemitic statements became publicly known, ‘Peter Sweden’ issued a statement on Twitter, saying he had now abandoned some of the views he espoused as recently as last year (although failing to apologise).

Who is “Peter Sweden”?

HOPE not hate can reveal that ‘Peter Sweden’ is actually Peter Imanuelsen, a 22-year-old photographer born in Norway, living in North Yorkshire and a British national.

Unlike what he has frequently claimed on his ‘Peter Sweden’ account, however, Peter Imanuelsen’s nationality is British, according to his own company’s filings, and according to the Companies House information register.

Imanuelsen was born and spent the first year and a half of his life in Norway before coming to Sweden in 1996. He then emigrated to the United States three years later in 1999, returning in 2002, only to leave Sweden again either in 2009 (according to records) or in 2004 (acccording to the Imanuelsens themselves).

So despite his whole persona being based on being Swedish, he has spent only 5-10 of the 22 years of his life in Sweden while apparently spending most of his life abroad, particularly in the United Kingdom, where he now lives, runs a business and is registered as a national.

As well as claiming to have spent more time in Sweden than he actually has, it also appears he may have mislead people about why he moved to the UK.

The various reasons he has given include include being a refugee fleeing political persecution – “I felt that me and my family really had to leave Sweden because of the government” – and because of “having the ‘wrong’ opinions, basically, in Sweden, right-wing opinions.”

‘Peter Sweden’ has also repeatedly stated that he was homeschooled as a child, and that Sweden’s tight regulations on homeschooling are what forced him and his family to leave the country.

He has even suggested he left Sweden for fear of being “kidnapped” by the Swedish government because he was homeschooled in the past, even though he is now 22.

However, Swedish public records indicate that Peter Imanuelsen and his parents left Sweden in October 2009, one year before this legislation restricting home schooling was even passed.

This contradicts not only the suggestion he makes in the Tara McCarthy (a British white nationalist and host of internet show, Reality Calls) interview, where he says he has lived in the UK for “some months” (as of May 2017), but also other statements he has made online, where he claims to have moved from Sweden in 2014.

Curiously, however, an article in Entreprenör magazine reports that Peter’s parents moved to the UK in 2004 in order to start a business here, long before homeschooling became restricted under Swedish law. Moreover, Peter Imanuelsen himself has stated at least once that he too has lived in the UK since 2004.

Assuming the date of 2004 is true, this suggests not only that the stated reason for moving – because homeschooling is illegal in Sweden – is anachronous at best, but also that Peter Imanuelsen, who was born in 1994, appears to have lived not in Sweden but in the UK for more than half of his life.

This makes sense given that he is listed as a British national in UK records.

However, a cursory investigation into his family’s business dealings reveals a murky world of controversy and unpaid taxes that may suggest a different reason for the family’s move to the UK.

The only other director, and person of significant control, of Peter Imanuelsen’s company is one Mr. Emanuel Imanuelsen, born in 1971, and listed as having the same correspondence address as Peter.

Emanuel Imanuelsen, according to Companies House, is an officer of six other companies apart from Peter’s photo and consultancy firm; three of these companies are all named K-Soft.

Judging by a company website, K-Soft is a business that sells software for use by small-company owners. Texts on the website explain that K-Soft is a family business run by Emanuel and his wife; the company history mentions their son.

Indeed, Peter Imanuelsen appears as a salesman and writer of copy for the company on the website of 7PC, which is officially registered as an affiliate of the Swedish branch of K-Soft, according to Swedish public registries.

Peter Imanuelsen’s personal involvement in the business also accounts for an otherwise seemingly bizarre tweet from the ‘Peter Sweden’ account, which in April 2016 suddenly replies argumentatively to a five-year-old tweet from a Norwegian man sharing a link to a text critical of K-Soft’s products.

(It should also be noted that the Swedish version of the K-Soft website provides a contact address in the Swedish municipality of Täby. ‘Peter Sweden’ has said that he once lived in Täby, which is also confirmed by Swedish public records.)

K-Soft, it turns out, is a company dogged by controversy. In Norway, several articles in trade media outlets in the 2000s report harsh criticism of K-Soft. Then in 2009, a Norwegian financial news website published an article with the headline: “Does he [Emanuel Imanuelsen] make millions a year from junk mail?”

Such was the negative publicity swirling around the company back in 2007 that its owner, Emanuel Imanuelsen (then-known as Rune Emanuel Karlsson), claiming that K-Soft was the target of a “plot”, decided to take four of its detractors to court in a lawsuit for alleged defamation, after they had said K-Soft was a “fraud company” that used spam email and fake references to market products. Imanuelsen also demanded that the court declare their statements invalid.

The district court of Oslo, however, dismissed the invalidation request, and found the defendants not guilty of defamation, ruling that their statements constituted free speech protected under the European Convention on Human Rights – and ordering Imanuelsen to pay the defendants’ court expenses, a sum of more than £7,600. However, this ruling was later invalidated on appeal in Norway, freeing Imanuelsen from the obligation to pay the court expenses for the defendants.

Millions of Krona in unpaid taxes

This June, it was reported that the Swedish Tax Agency, after assessing K-Soft, had found that the company’s principal, Mr Emanuel Imanuelsen, owed nearly £4.5 million in unpaid taxes, although the agency later revised the figure to about £700,000.

A legal battle ensued between Emanuel Imanuelsen’s lawyers and the Tax Agency, which decided to freeze some of the family’s assets and claim them as security for the debt. Soon the Swedish Debt Enforcement Agency got involved and, according to the Swedish business magazine Entreprenör, that agency recently seized a property owned by the Imanuelsen family in Täby, Sweden, to be sold on executive auction.

Is it possible that Peter Imanuelsen’s disgruntled attitude towards Sweden at least in part could be the result of the Swedish Tax Agency’s scrutiny of the controversial Imanuelsen family business and finances, in which Peter is involved?

What is clear is that ‘Peter Sweden’ has manufactured a back story for himself, centered around Sweden, that when investigated, simply doesn’t stand up to scrutiny.

Note: Peter Imanuelsen recently issued a statement on Twitter, issuing no apology for past statements but saying he has now abandoned some of the views he espoused as recently as last year.

We approached Peter Imanuelsen for comment and he replied with the following:

I’m truly amazed over the smear campaign I have seen. Assigning me views in a way that is ridicolous. So to give you the facts in all this smear, I indeed believe in traditionalism, faith and other classical right-wing beliefs.

With this statement you see how completely false it has been to label me as a holocaust denier, just because I had question marks about it for a few months in my life. However, the mainstream media has painted a completely false picture of me.

I believe that God created all men equal, and God makes no distinction between white, black, brown, yellow or any other race. I love black people. However I together with the majority of the English people believe that the solution isn’t to bring the whole of Africa to England. Multiculturism is in fact anti-diversity as it destroys both the unique culture of England and of Africa. Such differences of opinion should be allowed in a democracy without facing a smear campaign as you are doing. That is not democracy, that is communism.

And I can add, one of my best friends is actually a black person, see: https://www.youtube.com/watch?v=7yRrz_5ivZM

When asked about the unpaid tax bill discussed in this article he stated that the allegations were not true.