‘For Britain’, against Islam 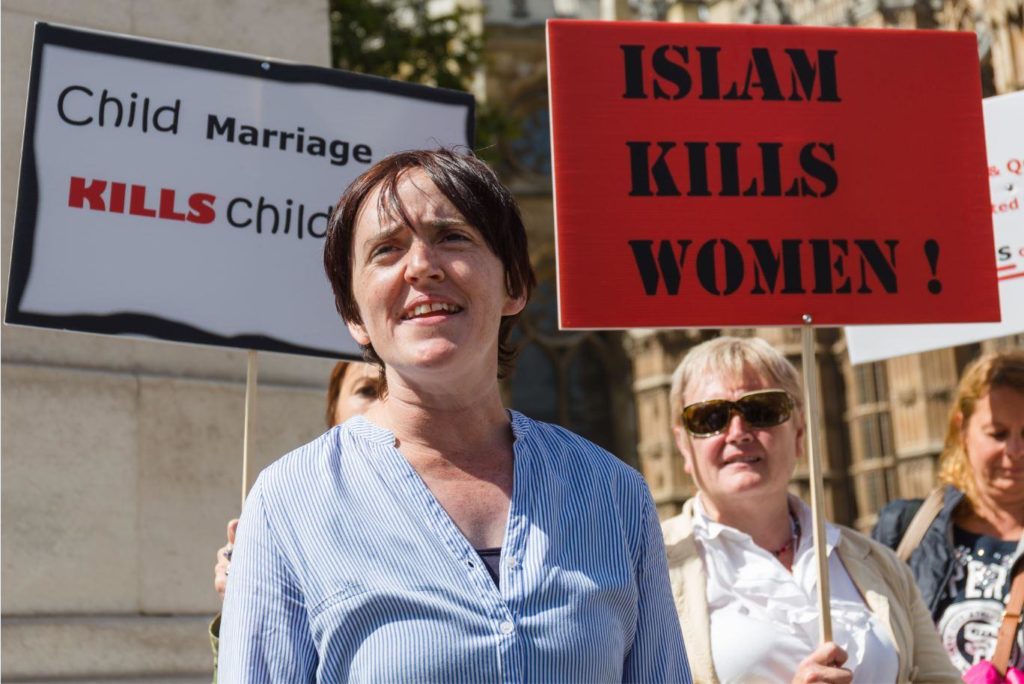 Waters is to be joined by Jack Buckby, formerly of the British National Party (BNP) and best known for standing for the extreme anti-Islam party Liberty GB in the Batley and Spen by-election following the murder of Jo Cox MP in 2016.

For Britain will stand on an explicitly anti-Muslim platform and while it may be consigned to the far-right fringe electorally, will seek to stir up hatred and exacerbate divisions in the UK.

While more details of the fledging party are yet to emerge, this is what we know so far.

For Britain is Waters’ attempt to harness the energy of her controversial UKIP leadership campaign, in which she came second with 21.3% of the vote. Waters’ perceived persecution by new UKIP leader Henry Bolton and former UKIP leader Nigel Farage has made her a martyr in the eyes of the Islamophobic elements within UKIP.

Both Waters and Buckby have extensive links in the anti-Islam ‘counter-jihad’ scene and have already gained the support of former English Defence League (EDL) leader Steven Yaxley-Lennon (aka Tommy Robinson), who is currently working as a reporter for Canadian far-right media platform Rebel Media.

Waters’ UKIP leadership manifesto, on which Buckby was a strong influence, unsurprisingly suggests For Britain will push punitive policies and alarmist language about Islam, which according to Waters “is having, and will continue to have, a profound and negative impact on freedom of speech, law enforcement, and especially the rights and freedoms of women”.

In order to combat Islam, Waters called for a ban on the burka, describing it as a “a security threat, a symbol of jihadism and a commitment to sharia”. She also advocates “the internment of known jihadis and the deportation of non-British citizens engaged in any Islam-related criminal act”, and would “bring to an end any covert relationships between police commanders and ‘community leaders’”.

Waters would also “commit to a large reduction in immigration, including a temporary freeze so that illegal migrants already in Britain can be investigated and deported in appropriate”.

Some of Waters’ policies echo the 2010-era BNP: for example, her desire to repeal the Human Rights Act in order to “clearly and unapologetically place the rights of British citizens above those of non-British citizens” and to “end the segregationist and race-based policing that emerged following the MacPherson Inquiry in to the murder of Stephen Lawrence.”

She also seeks a hard Brexit, and to “build alliances with like-minded partners throughout Europe”.

The extremeness of Waters’ beliefs, her history of engagement with far-right political projects and her association with notable far-right figures, means her ability to attract any mainstream support is severely limited.

As such, the chances of For Britain developing into a legitimate electoral threat are slim, with the party destined to serve as little more than a receptacle for the most extreme and disgruntled UKIP exiles and ex-BNP members.

One important barrier to Waters courting of UKIP has been Nigel Farage, who has maligned Waters in the press. By doing so Farage has been able to present himself as moderate in comparison, despite moving in an increasingly anti-immigrant and anti-Muslim direction himself.

Farage remains hugely popular among the UKIP support base and his disavowal of Waters will have undercut some of her potential support. Additionally the aggressive, often extreme rhetoric of Waters and especially Buckby is unlikely to be palatable to the electorate.

However, a lack of electoral potential doesn’t equate to a lack of danger.

For Britain will no doubt attempt to effectively exploit tragedies and terror attacks to disseminate dangerous, divisive anti-immigrant rhetoric online. Waters has a fairly large social media following, as does Lennon (although the extent to which he will be involved in the party is not yet clear).

Both Lennon and Buckby are currently employed by Rebel Media, a Canadian far-right media outlet, which has proved an effective loudspeaker for the far right; Lennon’s tirade for Rebel in the wake of Westminster attack has attracted 1.6million views on YouTube.

Moreover, both Waters and especially Lennon have a background in anti-Muslim street movements. Both were involved in the leadership of Pegida UK and Lennon of course was the central figure in the English Defence League (EDL) while it was still a force to be reckoned with. Waters announced her candidacy for UKIP leadership at a disorderly anti-Muslim demonstration in Manchester in June organised by Lennon.

While Waters has previously spoken of her desire to seek electoral means rather than street protests, the avenue to exploit highly-charged issues and events with action on the streets remains open to the party.