The Conservative Crisis Over Islamophobia 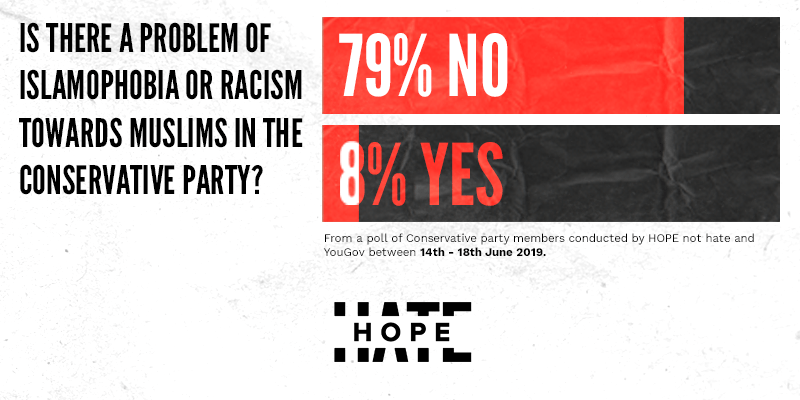 The data you are about to read came from a poll carried out by YouGov on behalf of HOPE not hate and released on the 24th June 2019.
After this poll was released, Prime Minister Theresa May responded by turning questions about the poll into a political attack on the Labour Party. Leadership candidate Jeremy Hunt has given a vague commitment to an inquiry into “all forms of prejudice” and the frontrunner for the Conservative leadership, Boris Johnson, reneged on his previous commitment to act.

HOPE not hate is today writing to the final two candidates for the leadership of the Conservative Party to ask that they take steps to address the Islamophobia crisis facing the party.

New polling carried out exclusively for HOPE not hate shows that Conservative members – the very people who will decide who Britain’s next prime minister will be – show worrying beliefs in Islamophobic myths, don’t want a Muslim to be Prime Minister, and overwhelmingly reject even the very idea that the Conservative Party has a problem with this issue.

HOPE not hate is now calling on the two main Conservative leadership candidates, Boris Johnson and Jeremy Hunt, to stand by their commitment made at last week’s leadership debate to hold an independent, external investigation into Islamophobia in the party, and the party’s reaction to it. You can read the full letter to the two candidates on the HOPE not hate website.

Islamophobia is a clear problem among party members

Exclusive polling carried out by YouGov for HOPE not hate has revealed worrying levels of Islamophobia among Conservative Party members, as well as a shocking level of denial about the problems the party faces.

The poll was conducted by YouGov, with a total sample size of 864 adults. The fieldwork was undertaken between 14th – 18th June 2019. The survey was carried out online. The figures have been weighted and are representative of all GB adults (aged 18+).

While Conservative members believe that discrimination against Muslims is a big, rather than small, issue by 48% to 39%, members also buy into Islamophobic myths:

Conservative members also show a high level of hostility to the Muslim community:

These numbers underline the fact that the spate of media stories about Conservative members are not isolated incidents.

Given the anti-Muslim sentiments of huge numbers of members, it is not surprising to learn that they dismiss the recent spate of incidents of Islamophobia:

It’s not just members of the party who have expressed Islamophobic views.

At the very top of the party, Boris Johnson infamously disparaged Muslim women as looking like “letterboxes” and “bank robbers”. In the days after Johnson made his comments, Muslim women who wore the niqab reported having those words thrown at them as insults on public transport. Johnson has a track record of this sort derogatory and ignorant comment towards Muslims. In his Have I Got Views For You book, he wrote: “The proposed ban on incitement to “religious hatred” makes no sense unless it involves a ban on the Koran itself.”

Complaints about Islamophobia amongst leading activists and councillors have been piling up.

Inaction in the face of Islamophobia is not an option

HOPE not hate calls out racism and hate wherever it occurs. This poll shows deeply troubling views amongst Conservative member, and the party cannot expect a free pass when there clear issues of racism within their ranks.

We want Boris Johnson and Michael Gove / Jeremy Hunt to show leadership by publicly and unambiguously committing to tackle this issue. They can do this by:

Specifically, the next leader of the party should ensure that some simple questions can be answered:

HOPE not hate extends the same offer we have made to other political parties: we’re ready to help in this process, and we have offered to meet with the new leader or his team to discuss plans to tackle this crisis once they are in office.