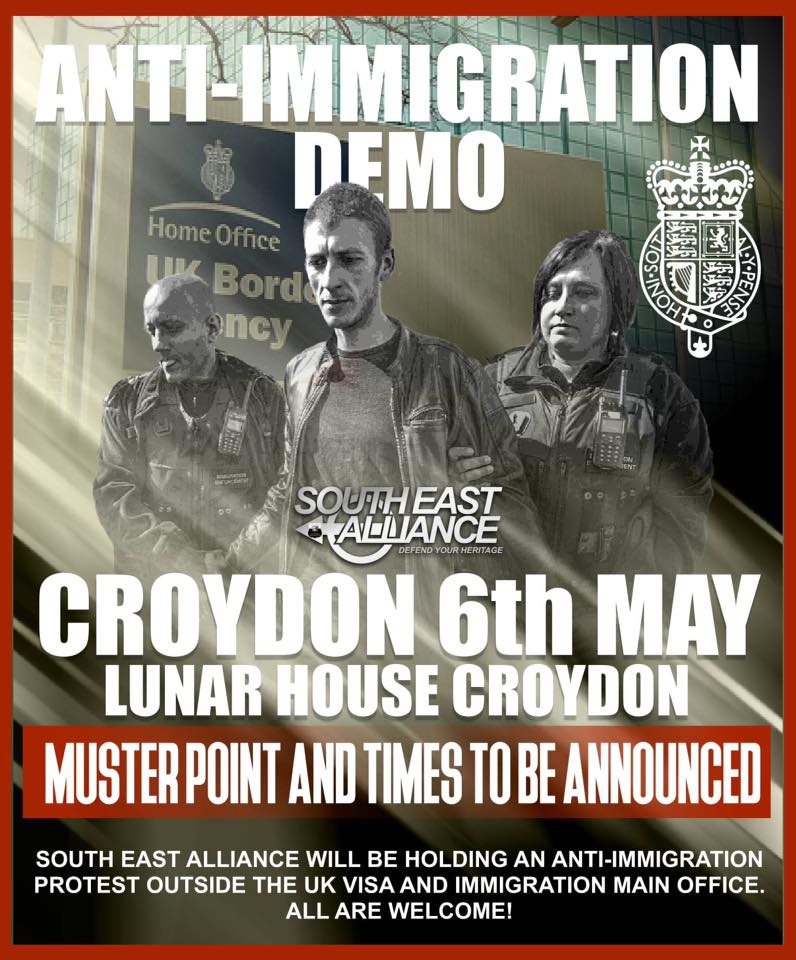 Whenever Britain’s moronic neo-Nazis hold their irregular and irrelevant demonstrations, they always react badly to being photographed. It does kind of defeat the purpose of holding a demonstration- you would think they would want all the publicity they could get.

However, rarely do these protests go to plan. It doesn’t matter which minuscule or moronic group it is; disaster just befalls them. Most nazi gangs in London are now forced to hold their marches on the pavement as there is just too few of them to warrant closing a bus lane as they shuffle pointlessly from one pub to another with a tatty flag emblazoned with the name of some high street sportswear emporium.

The streets of London may be paved with gold, but the pavements are generally awash with dog shit and the deranged. One of the biggest offenders’ are the South East Alliance (SEA).  They exercise their degenerate right to protest and never have they attracted more than just a few attendees.

The “leader” of the SEA is Paul Prodromoum, a comic-book figure of Helenic proportions of racial hatred. He uses the name ‘Pitt’ in case anyone questions the dubiousness of his not-so Anglo Saxon sounding (real) surname. Interestingly, Prodromou has called the rally one to “Protect your heritage.” Yet, he has totally ignored his own for years…

The master of unattended far-right soirees, faux pas and disasters, Prodromou has been boasting of late that he is one of the top names on MI5’s ‘watch-list’ of domestic extremists! This would only really be the case if MI5 had been tasked with hunting down foul mouthed fascists. You can see Prodromou skillfully destroying the English language and his credibility, here.

Further information about why certain other fascists are not so keen on him can be read here.

Still, a friend in need is a friend indeed, so this Saturday what is left of the National Front (NF) will join the SEA outside Lunar House in Croydon to complain about immigration. That’s right, Saturday. When the offices are closed. They’re really ‘sticking it to the man’ [and woman] of the immigration service- who will no doubt be at a barbecue or a friend’s wedding. Probably anywhere other than at Lunar House, Croydon. Now, the irony is not lost on us about the NF attending. They recently had a tie-in with the Polish Nazi gang National Rebirth of Poland (NOP). They can barely leave the house without, them! Still, having removed their Chairman because they could no longer work with a Scotsman, it’s unlikely that the tie-in with NOP will last any longer, either.

Still, it will be amusing to see the Polish Nazis line up to protect the NF and SEA at an anti-immigration demonstration.

Representing the NF will be local man Tony Martin who is also the NF’s Deputy Chairman. Prodromou is just about the only friend he has. Maybe Prodromou makes him look and feel clever.

The one other thing that does tickle us, however, is the striking similarity between the SEA’s advertisement of their little protest and a 1980’s warning about the dangers of drugs.