“We Will Stand By Your Side”: UKIP leader’s ties to far-right Swedes with Nazi roots 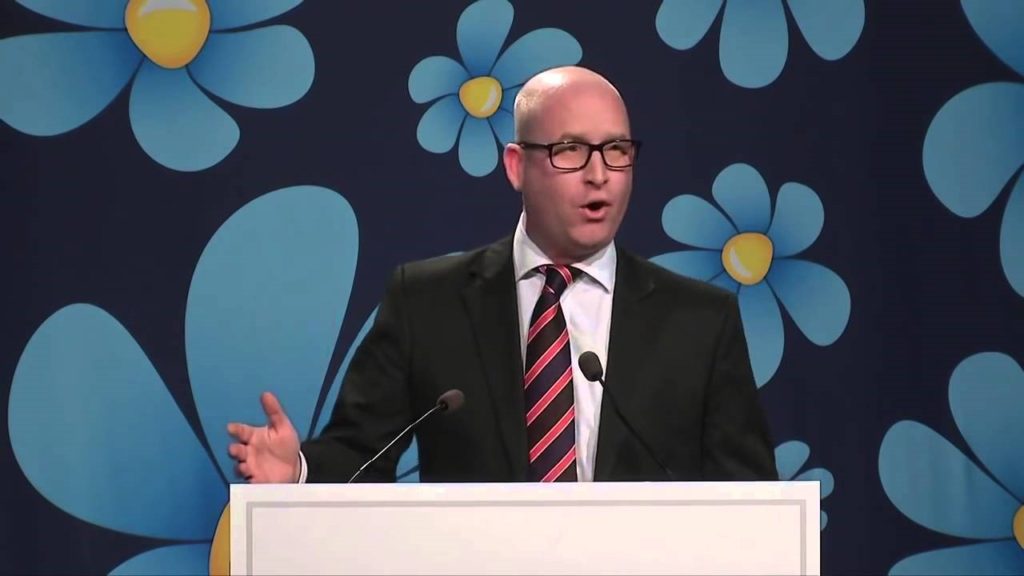 UKIP leader Paul Nuttall has been slammed by both the press and members of his own party for the overtly anti-Muslim direction in which he is leading UKIP. So far unexamined, however, are his links to the the Sweden Democrats (SD), a nationalist anti-immigration party with extreme roots.

Nuttall, who was recently snapped with SD leader Jimme Akesson and SD group leader Mattias Karlsson, has promised an enduring friendship between UKIP and the far-right Swedes. This troubling alliance shows UKIP’s increasingly anti-Muslim platform, which includes banning the burka and a moratorium on new Islamic faith schools, in a new light.

Founded in 1988 by, among others, a former member of Hitler’s Waffen SS, the SD stood in its early years on an openly racist platform, functioning as a conduit for Sweden’s skinheads and antisemites. However, after the SD youth movement leader was convicted of taking a grenade to a left-wing rally in 1993, the party underwent a “boots to suits” makeover, banning members from wearing Nazi uniforms to events in 1996.

Jimme Akesson became SD leader in 2005 and has eschewed open references to race, rebranding the party along anti-Muslim and anti-immigration lines. Akesson dropped SD’s flaming torch logo – borrowed from the UK National Front – in 2006, replacing it with the innocuous blue flower used today.

This more moderate image has helped the SD market its anti-immigrant policies to a much larger section of the Swedish population, receiving 25.5% support in a 2015 opinion poll. Despite its modernised image, however, the SD continues to harbour racist and extreme elements within its ranks. Akesson himself has referred to Islam as the greatest threat to Sweden “since WWII”.

UKIP leader Nigel Farage was initially reticent to display support for a party with such a toxic image, stating in an interview that it was “unlikely” that UKIP would work with the SD. However, the parties formally aligned in 2014 when the SD became a member of UKIP’s group in the European Parliament, Europe of Freedom and Direct Democracy (EFDD) alongside a number of European far-right parties, helping to secure lucrative EU funding.

The relationship has not always been easy, and UKIP was embroiled in an scandal after an ethnic minority advisor in Brussels alleged that he had been bullied by the party to retract an official complaint of racial abuse made against Karl Joel Ankar, an SD assistant to Kristina Winberg MEP.

Despite this, Nuttall has displayed none of Farage’s initial hesitance and has promised an enduring friendship between UKIP and the SD, stressing their ideological similarities. Speaking at the SD’s Conference in November 2015, Nuttall stated:

“Our two parties, the Sweden Democrats and UKIP, are very similar… because we speak the language of the people. We say the things that other people are thinking, but don’t have the honesty to say. We will be by your side right the way through until you prevail”.

Nuttall also praised his EFDD colleagues, SD MEPs Peter Lundgren and Kristina Winberg, stating: “They do a fantastic job on your behalf. They are politically sound, we have lots of common ground”. Lundgren returned the favour, speaking at UKIP’s conference in 2016.

Evidence of a personal relationship between Nuttall and the SD leadership emerged when, with tensions still high in the wake of the November 2015 Bataclan massacre in Paris, Nuttall embarked on a “fact finding mission” to the Belgian suburb of Molenbeek with Akkesson. The trip was organised by Raheem Kassam, editor of Breitbart London, and Nuttall later detailed the trip in his Breitbart column.

Signifying their bond, UKIP and the SD even co-organised a far-right networking event in Stockholm in November 2016. Thrown for what the SD called “other parties like us”, guests at the event included former Czech President Vaclav Klaus, known for his hostility towards “homosexualism”, and former Lithuanian President Rolandas Paksas, impeached in 2004 following suspected links to Russian organised crime.

HOPE not hate has previously revealed the social as well as political friendship between younger UKIP staff members and extreme elements with the SD, as well as the vile racist jokes made by the chairman of the SD’s youth group at the UKIP youth conference in July. It is now clear that the increasing entwinement between the two parties is being led from the very head of the party.

UKIP has repeatedly denied being a racist party, but away from the watching eye of the British public its supposedly principled position has been proved empty. UKIP’s continued cooperation helps legitimise far-right movements, extending to them the cover of UKIP’s more mainstream populist image. UKIP’s cooperation with the SD in the EFDD also provides it with considerable funding.

With allies such as these, it is also perhaps unsurprising that Nuttall has fashioned an ‘Integration Agenda’ so extreme that it has divided the party and forced him to deny that he is “at war with Muslims”. Following UKIP’s expected electoral wipe out in the upcoming general election, Nuttall’s “similarities” with the SD may see him continue to lead UKIP into more extreme, dangerous territory.