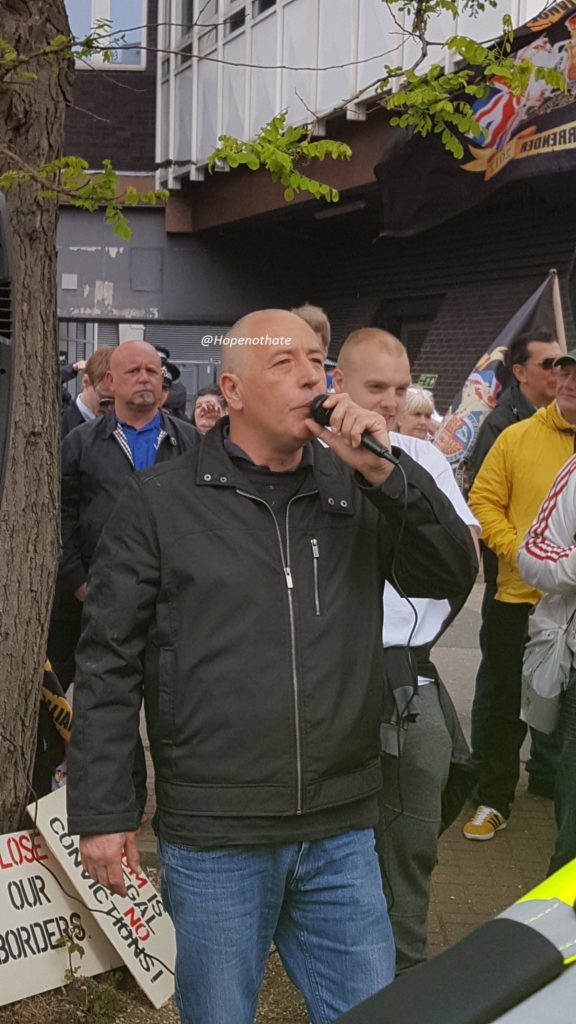 The flea circus that is South East Alliance (SEA) descended on Croydon’s immigration centre Lunar House this afternoon in a show weakness from mini-Fuhrer and son of Cypriot immigrants- Paul Prodromou. Unlikely as it seems, Prodromou, who uses the name ‘Pitt’ to avoid being the victim of racism, is worried about immigration.

Two questions occur to me – can a crowd of less than 20 people actually descend and how many people constitute an alliance? Anyway, they came, they were shouted down by hundreds of antifascists and locals, were screened off by hundreds of Met Officers – costing hundreds of thousands of pounds, then they went home.

Six of them spoke/ranted/dribbled incoherently; Prodromou his foulmouthed self, Tony Martin of the National Front (NF), Kevin Layzell (NF, National Action and National Rebirth of Poland), dodgy drummer Mac McElhinney [victim of the tool bag], plus a shouty, incoherent bloke with a grey beard and a woman I could not hear or even be bothered to catch her name. The speeches tested the boundaries of legality, lucidity and coherence. To add to what they thought was solemnity, but actually giving an idea as to how tacky they are, they started their protest to the sound of a scratched and warped recording of long dead and long forgotten British Nazi John Tyndall railing against immigration, globalisation and moral turpitude; this was the high point.

Prodromou spat out a racist diatribe denigrating all “incomers” “Asians, West Indians etc.”, Tony Martin mumbled, stumbled and invoked the problems of Diane Abbott in remembering an interminable array of meaningless figures. Then the dodgy drummer Mac McElhinney issued a garbled “speech” which he attempted to finish with David Lane’s 14 Words but was sadly floundering until he was rescued by Prodromou, so conversant now with Nazi doctrine, shouting “Tomorrow belongs to us!”

Then came Kevin ‘Helium’ Layzell. Layzell describes himself as a “full-time speaker” [better than admitting to being on the state’s payroll to spy on Polish fascists, I guess] but seriously, even if I was a hardened and hard up Nazi, I would rather pay him a shekel to piss off and shut up.

Layzell started off an octave above falsetto and continued climbing in a most bizarre rapid fire rant, a rant that was lost on his three listeners. Layzell, who has perfected the flea market Inspector Gadget and CHiPS look, is one of the Right’s most extraordinary  “characters”. Talking mainly to himself he squeaked about blacks and “others” with his back to the massed ranks of antifascists, in contrast to Prodromou who pugnaciously faced down opponents safely from behind a phalanx of police officers.

It’s clear that Prodromou is physically excited by the notoriety and the notion he is spreading to his dwindling followers that the secret state is interested in him. He strutted like an aging, juvenile cock. He’s more of a danger to the English language than he ever would be to the state. After all, he needs their dole money to prop up his building business.

Finally, the police pulled the party.  Prodromou, like a latter-day Canute, screamed that the day was a success as they had “marched” and vowed to return to Croydon more often. Then, like any victorious leader should- he and his twelve comrades were driven like cattle down side streets to the railway station pursued by a barrage of heckles and abuse from hundreds who wanted to make sure they left.