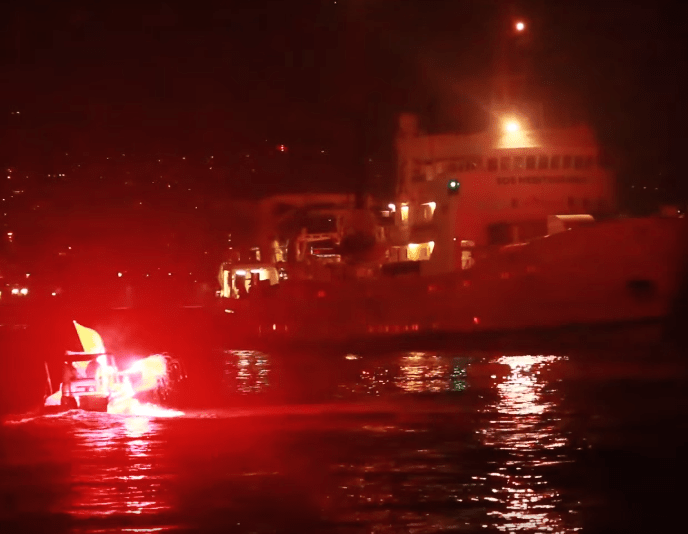 Three members of Génération Identitaire, the youth wing of the French branch of the anti-Islam, anti-immigrant and xenophobic Identitarian movement, as well as Canadian alt-light journalist Lauren Southern, were detained by the Italian coast guard on Friday night. This followed their attempt at preventing a migrant and refugee rescue boat from travelling to Libya from Sicily.

As HOPE not hate reported last week, Southern met with Génération Identitaire when she covered the election protests in Paris. Now, travelling in a small boat with members of the movement and talking on a livestreamed Peiscope video of their activity, Southern exclaimed:

The group then lit a flare to draw the rescue boat’s attention and unfurled a banner that read “NO WAY for Human Trafficking” – a clear attempt at tarnishing the lifesaving work of search and rescue ships.

After being released while awaiting charge, Southern appeared in another Periscope video, this time with leader of the Austrian Identitarian movement, Martin Sellner. Southern had previously expressed support for Sellner in an interview with him while she was still at the far right Canadian media company Rebel Media.

Sellner hinted in the livestream that this was just the start and that the future mission of the Identitarians was to continue to “track down and stop [the] dirty work of these human trafficking ships”. Like the banner’s claim, this deliberately conflates the lifesaving work of search and rescue efforts with human trafficking groups, and belies the Identitarians’ true anti-migrant stance.

A video on Southern’s YouTube channel the following day, again featuring Sellner, added that the Identitarian movement would set up a site where people can sign up to help their mission to block search and rescue boats. Moreover, they would “weaponise the internet” to track these lifesaving ships.

Génération Identitaire have since set up a page, with the stated aim of raising funds to “gather a crew, equip a boat and set sails on the Mediterranean to chase down the trafficking ships”.

Despite Sellner claiming in the most recent video he did with Southern that “when we are protecting our borders, we also want to help those people there”, the new ‘Defend Europe’ site reveals Generation Identitaire’s hate-fuelled motives. It states:

“[…] ships packed with illegal Immigrants are flooding the European borders. An invasion is taking place. This massiv [sic] immigration is changing the face of our continent. We are loosing [sic] our safety, our way of life and we will become a minority in our own countries. Our Future – is under attack.”

Alongside raising funds through the site for travel costs, ships and film equipment, the site also indicates that it needs funds for “Research” with an icon displaying the 4chan logo.

Sellner had intimated in the aforementioned livestream with Southern that they would rely on 4chan. Sellner called on the help of “4chan /pol/ autists” in this boat-blocking effort, adding that “you on the internet and we on the sea, together we can stop this”. Southern echoed Sellner’s request, stating “absolutely, /pol/ we’re gonna [sic] need your help now!”

(/pol/ is a subsection of the image sharing 4chan site, and “autists” is an ableist reference to autism used to refer to members of the site who are considered socially awkward and technologically adept.)

This, clearly, is an attempt to repeat the alt-right’s likely recent reliance on 4chan’s user base during the #MacronLeaks hacking campaign.

Search and Rescue on the Mediterranean Sea

The boat Southern identified in her livestream is the ‘Aquarius’, a vessel operated by the NGO SOS Mediterranee and which has an onboard medical team from Medicins Sans Frontieres (MSF). SOS Mediterranee’s site states that their search and rescue effort was created in response to the “dramatic increase of boats in distress and the insufficiency of existing measures” to the crisis in the Mediterranean.

Contrary to the image painted by Southern and Génération Identitaire’s, SOS Mediterranee aims to:

“save individuals who have embarked on the dangerous crossing from Libya to Europe in overloaded boats unfit for the high seas”.

Furthermore, as their charter states, the organisation protects and assists migrants once in Europe “through guidance and accompaniment to the proper authorities” and helps inform “migrants in their home and/or transit countries […] of the dangers they expose themselves to”.

However, both SOS Mediterranee and MSF state that their rescue operations are coordinated alongside the Maritime Rescue Coordination Centre in Rome, the official body for such operations in the Mediterranean.

Furthermore, the site of MSF highlights that these efforts are in compliance with international maritime law, both regarding legal patrolling distances from the Libyan coast and the legal obligation to assist boats in distress.

Importantly, they add that if they were not there other vessels “that do not specialise in search and rescue operations, would be asked to assist boats in distress”.

Such considerations of genuine risk to human life are ignored by the Identitarians’ “Defend Europe” mission. Instead, the narrative is turned back towards Europe when their site claims:

“We are preparing a big rescue mission on the Mediterranean. It’s a mission to rescue Europe by stopping illegal immigration.”

HOPE not hate will continue to monitor the Identitarians’ mission to prevent the lifesaving work of search and rescue organisations helping people flee from danger.