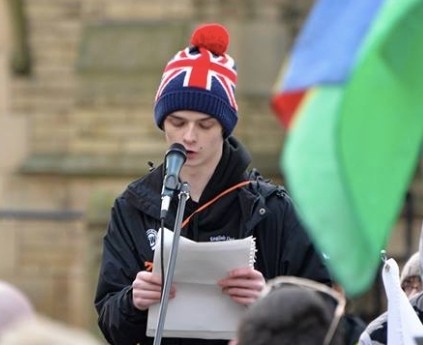 The English Defence League’s Liverpool organiser has called for an arson attack on a mosque.

In response to a picture of a mosque being posted on his Facebook, Dylan Cresswell wrote: “Burn the f*cking sh*thole to the floor.” Cresswell, who also posts as Dylan Fidel, made the outburst just two weeks before the EDL are due to visit the Merseyside city.

It is the latest in a line of febrile posts made by young pretender to the EDL throne.

The spotty face behind the Liverpool protest, he used its events page last week to post a meme stating “Better dead than red.” Yesterday he sought to promote the June 3rd demo via a video, posted live and direct. From his bedroom, at his nan’s.

It was a massive social media event. It began with the boy welcoming his audience, individually.

All 20 who watched it saw him dribble on in a spectacularly monotone voice. “Let’s make a big statement and hit them where it hurts” he droned.

Liverpool will be surprised to hear that it has for years “been controlled by the militant far left and Irish republicans”. Were this even close to being true, I’m still not sure what it would have to do with the EDL’s stated aims.

It seems almost like dopey Dylan just wants to engineer a ruck with “lefties.” He even refers back to the previous embarrassments suffered by the far right when they sought to march in that great city. He seems upset that Liverpudlians stood together en masse to rout the fascists.

He whines about how the two groups behind those protests were prevented from marching. Let’s just recall who they were. Firstly National Action, an overtly neo-Nazi gang now proscribed as a terrorist organisation. Secondly, the North West Infidels, a drug-dealing gang most of whom are now in chokey for violence at a South East Alliance organised protest/riot in Dover.

These are the kind of people Dylan wants to associate himself and the EDL with. Nazi thugs.

He talks too of how Merseyside Police are treating him with respect as he sets about organising his little shindig. They might well be. But they should also be considering just what the purpose of his demo is and of their duty to prevent breaches of the peace. Is it right that a man who calls for a mosque to be burned and wants to see people hit where it hurts is calling for “feet on the streets”?

Thankfully, this “national demo” looks like it will be pitifully small, which means not too many Merseyside officers will be required for the inevitable kettle they’ll throw around Cresswell’s crew.

As former Liverpool EDL organiser Kurtis Cawley has noted, the EDL is finished in the North. The South and Midlands too.

It looks like even one-man protest movement David Coppin is going to give it a swerve. That’s good news for his immigrant wife. For once he should be home for the weekend instead of being off out protesting about immigrants.