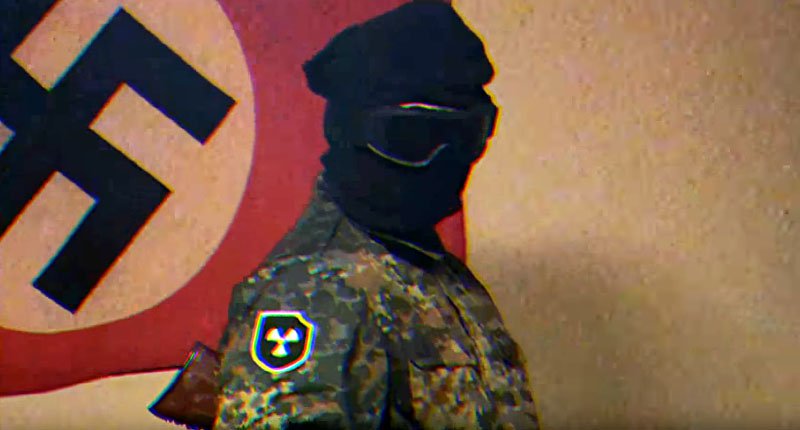 Some disturbing news from Miami where a man arrested following a traffic stop confessed to being a neo-Nazi who was manufacturing explosives in his apartment. When the police went to his apartment they found among other things of interest, radiation materials.

FBI and Tampa Police Department officers found a cooler containing a white cake-like substance underneath the man’s apartment that tested positive for hexamethane triperoxide diamine, which is a precursor to several different types of explosives. He was arrested on possession of unregistered destructive devices and unlawful storage of explosive charges.

Also found in the garage were empty 5.56-caliber bullet casings with fuses that agents say could be used as detonators of the HMTD.

The man, Brandon Rusell, is a member of a tiny group called Atom Waffen, a like minded gang to our very own National Action, which is supposed to be  a banned group.

The name Brandon Russell is known to us here because in 2015 we heard a rumour that he was coming to the United Kingdom to meet the leadership of National Action (NA). At the time there seemed little we could do about it as hard facts were very short on the ground. However, we’re pretty sure it is only going to be a matter of days until the home office will be in possession of the emails and photographs that Russell had of his trip to the UK, and perhaps they will themselves, be heading over to Swansea where the hapless and moronic Ben Raymond of NA infamy is now living in reported squalor, surrounded by empty crisps packets, Jazz magazines and unresponsive dating apps.

If any member of the group has the photograph of Raymond in his satin, Snoopy underpants standing with Russell, the usual reward will apply.

To say this has been a bad couple of days for the American group Russell leads would be an understatement. Two other alleged members of Atom Waffen were only a few days before, gunned down by a third member who had, according to neo-Nazi sources in the States, converted to Islam but continued being a member of the group.

Whilst the Home Office are verifying all of this, perhaps it will also finally act about National Action still meeting and organising?

Griffin laughs into his Goulash

It’s not often former British National Party (BNP) leader Nick Griffin gets to boast about his past performances on television, but even his much remembered car-crash of an appearance on Question Time back in 2009 will pale into insignificance next to the extraordinarily poor performance of his successor, Adam Walker yesterday. Walker, who runs quite the opposite of a well-oiled nazi machine, was hoping to blag his way through a rare TV appearance and diminish all chatter about his teaching ban and get the focus back on those darkies, immigrants, Muslims, foreigners etc, etc he does not like. You can watch here from the forty-five minute mark Walker being torn to pieces, mainly by his own tongue-tied self.

According to the BNP’s own take on the interview, Walker was brilliant. They did not however, furnish their member with a link to it. Instead, they claimed that since Walker’s car-crash performance,  “the phones haven’t stopped ringing.” I imagine that was the the last member of the party cancelling her membership.