Whatever happened to… part V 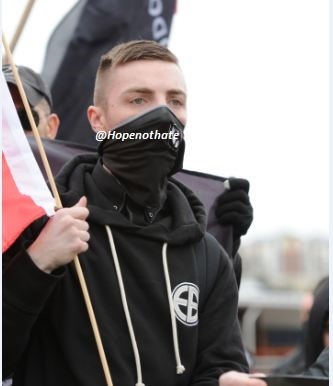 A couple of days ago my (most handsome) colleague ran a blog on Jack “The Jew-hater” Renshaw. Well, how about whatever happen to Garron Helm?

Helm was jailed for four weeks back in October 2014 for vile Antisemitic tweets sent to Liverpool MP Luciana Berger.

Helm was 21 years of age at the time and his imprisonment started an unprecedented international campaign of anti-Jewish hatred directed at Ms Berger.

Helm became somewhat of a hero to the Nazi teen gang National Action (NA) and their little friends in the United States, too. He was a ‘prisoner of war’ to them, and as he sat in his cell late into those lonely nights surrounded by the other undesirables his prison wing housed, he wrote love letters and poems of his aching loneliness and dark desires to a young female admirer he hoped would one day join him in spilling blood on a virgin copy of Mein Kampf. Yes, Garron dreamed she would join him in some kind of sick nazi wedding ceremony administered by National Action’s lead pervert, Ben Raymond.

But there was trouble in prison paradise; whilst Helm poured out his heart, amorous Alex Davies, now a world famous wally but diminishing influence in NA, attempted to cut Garron’s  proverbial lunch with a late night visit consisting of a tube of Clearasil and half a dozen cans of Kestrel lager to Helm’s muse.

Since his release, and apologising and then retracting said apology to Ms Berger, Helm’s life has been not quite the life of sunshine he expected. He’s been everywhere his little swastika armbands could take him, but it has been endless misery for him.

In his most recent outing of note, captured by ITV news,  Helm appears to still hold dear the very idea of murdering people who he either does not like, or are of the wrong colour for him. He no longer believes in washing or cutting his hair, either. Apparently he has taken to borrowing money from Mark Collett, at time when Collett can really only buy a friend.

Helm must be aware how at least a couple of other NA members who have been on activities with Collett lately, have  found themselves up before the courts after accepting invitations to join him on leafleting sessions.

In terms of friends, well, Helm was friends with Polish Nazi ‘Raddik’ from Manchester.  Now that ‘Raddik’ has dumped Helm’s sister, not only will the three of them not be popping off to the woods together for photo-shoots, Helm won’t be getting any trips to Poland to garnish information to pass to Martin, the agent of Agencia Wywiadu who lives in London and passes information on the Polish nazi group The National Rebirth of Poland who are domiciled somewhere between Peckham and Plumstead.

What further complicates that relationship for Helm, is that serial wally and bag-man for the Poles, Kevin Layzell,  has taken a shine to Helm’s former Polish squeeze, Maria, who he turned to after Davies had burned down both their bridges.

For his next stunt, maybe Helm could tell us who pays his rent for him?