After Finsbury, the far-right must acknowledge their role 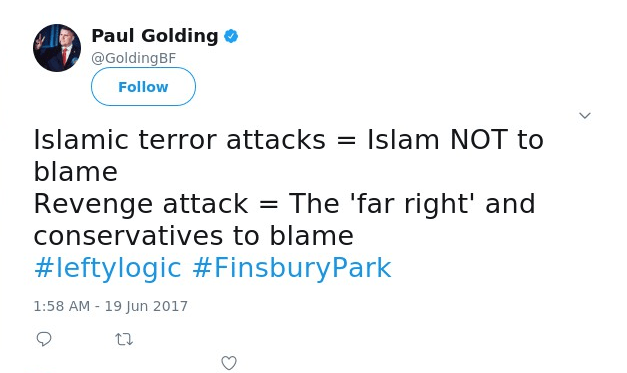 Just after 12:20am this morning a van hit pedestrians outside Finsbury Park mosque following prayers, in an incident the police are treating as terrorism. One person died following the attack and 11 were injured, all of whom the police report were Muslim.

The van driver, 47-year old Darren Osborne from Cardiff, described as a “large white man” by witnesses, reportedly shouted “I’m going to kill all Muslims”. He has being held on suspicion of terror offences.

The Response from the Extreme Far Right

Predictably, those from the most extreme fringes of the far-right celebrated the attack. In Stormfront, the largest neo-Nazi online forum in the world, one user endorsed the attack as a “protest against these disgusting pigs”, while another said it was “a shame there wasn’t more victims”. Others said the attacker should have used a 20 tonne truck”, that “Muslims are crazy. They like to blow themselves up”, and sarcastically proclaimed “Awww what a shame”.

Interestingly, members of the forum also discussed mainstream far-right figures, with one user trying to suggest that there was no reason to blame the right-wing press and the likes of Katie Hopkins, Nigel Farage and Tommy Robinson (Stephen Lennon).

For those in an extreme far-right community to dismiss the possibility that there exists a climate of hate cultivated by such figures, and which contributes to anti-Muslim sentiment of the sort that seemed to motivate the attacker in this occasion, is telling. This is, after all, a climate that they would wish to see grow.

What this exhibits, however, is an ignorance that is shared as much by the fringes as it is by the mainstream of the far right.

Response from the wider far right Tommy Robinson AKA Stephen Yaxley-Lennon, former EDL co-founder and now contributor for the far-right Canadian Rebel Media platform, responded in a manner that is indicative of this ignorance.

Lennon did condemn the attack, stating in a tweet that: “I genuinely hope the innocent people targeted tonight outside the mosque are ok.” Furthermore, in a Periscope livestream, he added: “[…] the man who committed this is a terrorist, it’s a disgusting act”.

Yet, Lennon was also dismissive of the possibility that he contributed in any way to a climate of hate, despite having only recently created a video for Rebel Media following the London Bridge terrorist attack in which slated perceived inaction by the British government:

“[…] will only facilitate the creation of a disgruntled and angry population who will end up cleaning out this Islamic problem.”

Robinson’s vague reference to an “Islamic problem” highlights the issue here. While Robinson does not advocate the violence or level of hatred many of his critics thinks he does towards Muslims, to assume that he doesn’t contribute to a more insidious and accumulative climate of hatred is naive in the extreme. The tweet above highlights a perception that the ‘mainstream’ far right relies on to downplay the reality of anti-Muslim hatred. By pointing to the organised nature of Islamist extremism, the “network, or visiting religious place preaching hate, [or] training”, Lennon and others can blur such infrastructures with the infrastructure of Islam as a whole – its organisations, places of worship, figures, and so on.

In addition to falsely and dangerously conflating the two, such networks, speakers and training have long existed within the far right too. Moreover, as far-right groups have coalesced online – existing across fringe forums like those above, to the hate-filled social media bubbles found across Twitter and Facebook which Lennon and others reside in – they have not disappeared but have rather grown and become more identifiable.

Evidence of this ecosystem of hate online in response to the attack came from many key figures. Infowars and Prison Planet conspiracy theorist and British far-right commentator, Paul Joseph Watson, went to Facebook to dismiss the threat of far-right hate: Like Lennon, Watson also attempted to shift the narrative so that only those who called for violence could be blamed for contributing to a climate of hate. Furthermore, Paul Golding, leader of Britain First, likewise tried to absolve responsibility in a video following the attack. He stated that:

“It is the government and the left they create the policies, which create this kind of thing.”

Continuing to list the “real” reasons for the attack, Golding added: The likes of Lennon, Watson, Marie-Waters, Golding and others often talk about speaking out for what they claim many believe but are afraid to say.

Yet when their voices lead to a climate of hate, that speaks only to an online community that already believes in their divisive message, they are not restoring democracy. Instead, they undermine it through emboldening those who wish to silence or, more tragically, destroy the lives of others.

Many supporters of Lennon and others’ on the far right will not want effective, measured, and non-violent responses to the threat of Islamist extremism. Rather, they will be looking for anti-Islam voices who, they feel, legitimate their desires to carry out attacks such as that seen in Finsbury Park.

The climate of hate that such individuals feed on includes the likes of Lennon, whether or not he chooses it. Furthermore, for many the “Islamic problem” Lennon refers to, as well as the response to it, may be far more extreme than Lennon calls for.

Following the attack in Finsbury Park, both Lennon and Watson asked those criticising them online for evidence they were inciting, or had ever incited, hatred. In doing so, they ignore an equally important issue: namely, the issue of how those within this hateful ecosystem receive these statements. For Watson, Lennon and others, this responsibility is much harder to absolve.

Britain First: Dysfunctional, Dangerous and in our Communities
Right Response