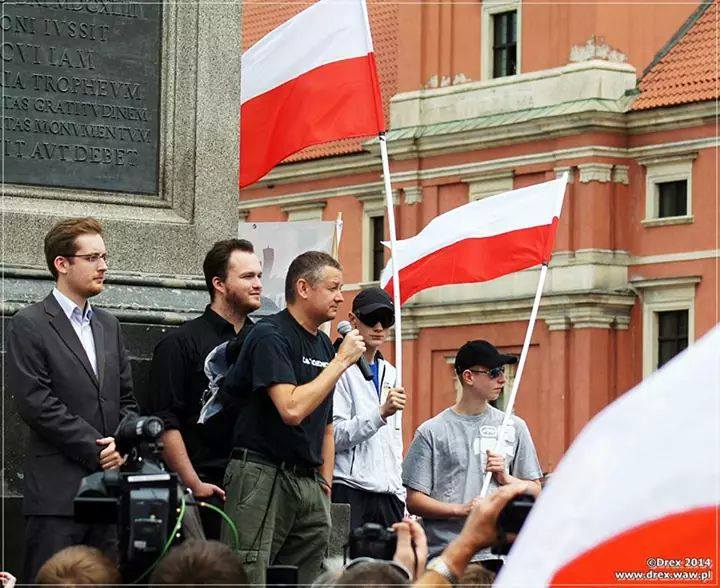 Donald Trump’s visit to Poland on 5-6 July has been marred by controversy over the alleged influence of a well-known far right activist.

Trump is going to speak at a public rally near the 1944 Warsaw Uprising monument. Right-wing groups are organising buses to transport people from all over Poland in order to provide a big crowd for the event. Apparently it is the first US President in many years whose visit to Poland does not include a tribute to the 1943 Warsaw Ghetto Uprising memorial that is a short walking distance from the other monument at a time when antisemitism has been reportedly on the rise in both USA and Poland.

On 3 July, Polish state television reported in its main news broadcast that Trump’s speech at the rally has been drawn up in consultation with Polish-American historian Marek J. Chodakiewicz.

Chodakiewicz himself appeared in the report and commented on the speech’s contents. It has also been reported Chodakiewicz is to be a member of the presidential delegation flying to Warsaw.

The report raised eyebrows because of Chodakiewicz’s long record of far right links. He is mostly known as a denier of Polish responsibility for acts of antisemitism, including the infamous Jedwabne pogrom of 1941.

He has repeatedly claimed Jews themselves were chiefly responsible for the hostility of their Polish neighbours. Accusations of Jewish involvement with Communism have been present in many of Chodakiewicz’s writings.

A frequent contributor to Polish right-wing media, he has recently referred to Bernie Sanders as “a Jewish bolshevik”.

He defended a Breitbart News writer who attacked Washington Post columnist Anne Applebaum by calling her a “Polish, Jewish, American elitist” and accusing her of having “global media contacts”.

Chodakiewicz teaches at a Washington DC-based institution, the Institute of World Politics, but he has been active on the Polish far right spectrum. For example, he spoke at a rally organised by the extreme-right Nationalist Movement (Ruch Narodowy, RN) in June 2014. During his speech, he exclaimed: “We want a Catholic Poland, not a bolshevik one, not multicultural or gay!”

Over the years, Chodakiewicz has repeatedly called for Poland to obtain its own nuclear weapons. He has also commented on other issues, for example, in January 2017 this year, he published an article protesting against “ongoing genocide against Whites” in South Africa.

Back in 2009, the Alabama-based Southern Poverty Law Center, assisted by the Warsaw-based Never Again Association, exposed Chodakiewicz’s far right views and connections in a widely-commented article.

For example, Jan T. Gross, a Princeton University history professor known for his books on anti-Jewish pogroms was quoted saying about Chodakiewicz: “The guy is an ideologist of the radical right, (…) I don’t have any doubts that he’s anti-Semitic.”

In the wake of the SPLC publication, Chodakiewicz lost his seat on the US Holocaust Memorial Museum Council, a position he had received, to the surprise of many, on George W.Bush’s nomination.

Chodakiewicz himself has bragged to media about his allotted seat on board Air Force One. Days after the original report on Polish TV, US officials stopped short of clearly confirming or denying Chodakiewicz’s involvement in the presidential visit.