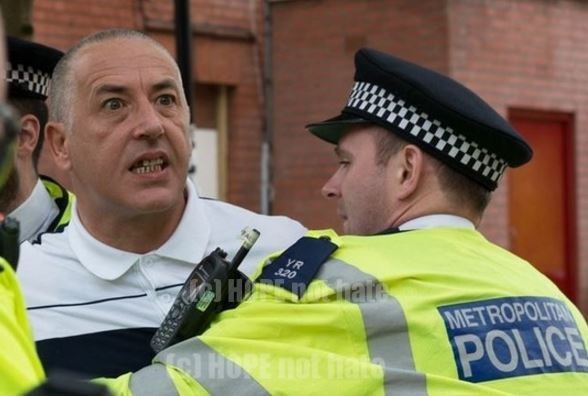 The far-right’s Paul Prodromou, the one-man walking and talking foul mouth, has been found guilty at Liverpool Magistrates court this afternoon of using threatening, abusive and insulting words during a disastrous far-right demonstration in Liverpool last February.

Prodromou, whose mouth appears to only open for profanity, was in Liverpool with a host of other neo-Nazis as part of a plan to atone for the disaster that was August 2015 when the people of Liverpooltrapped gangs of neo-Nazis in the left luggage department at Liverpool’s Lime Street station.

As with August 2015, last February’s rally was also a disaster. At his court appearance today, Prodromou claimed he had acted in self defence to a charge of hitting someone over the head with a flag pole.

There was also some other confusion; namely over Mr Prodromou’s name. It is well known that Prodromou likes to be known as the more Anglo-Saxon sounding “Pitt”, but he confirmed to the court that his name is Prodromou. That was particularly interesting, as in this foul mouthed rant, Prodromou makes a big thing of “standing by my name.” Oh well..

The magistrates decide that he should get a two year conditional discharge starting from today. He should also meet all the court costs given a full trial has taken place. Those costs are £620.00. He was also ordered to pay a £15 victim surcharge.

Prodromou asked if he could pay the fine back at £5 per week.

Already his supporters from his tiny South East Alliance (SEA) gang are claiming it is a great result for their leader. Others will not be so sure. Late last year, the fascist magazine Heritage & Destiny aired what a lot of people have been thinking for the last eighteen months, that it is becoming tiresome having Prodromou shouting, pushing and shoving his way around the far-right and yet unlike so many others he has encouraged, he never seems to end up in gaol. They were very clear as to how they felt about him.

Prodromou seemed to have no doubt he would be back at work tomorrow. He’s made himself a lovely little picture for his Facebook page where he claims he’ll be back terrorising women and children again this year.

Can you really believe anything he says?