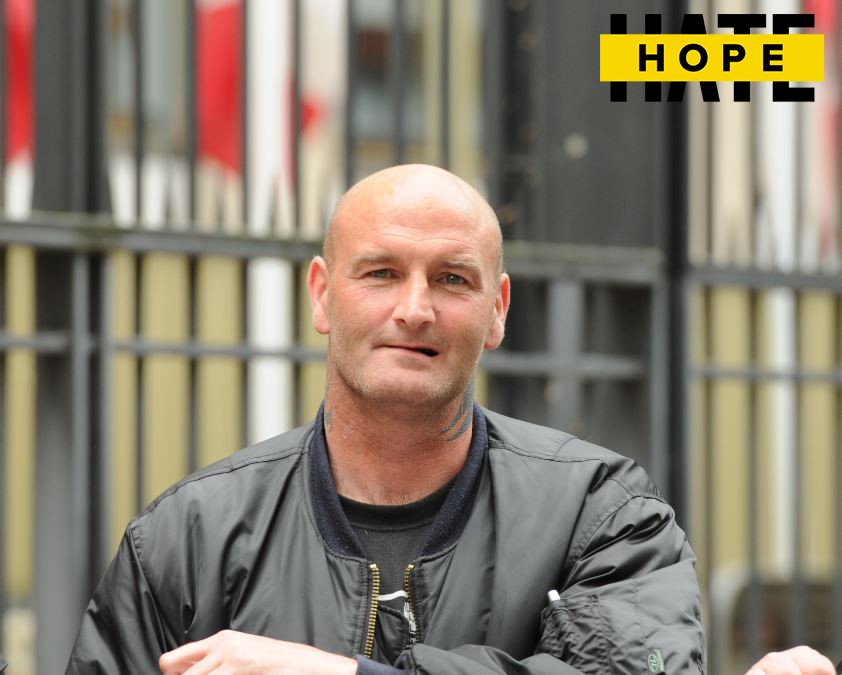 British Nazis rarely go missing. They just go to prison and get forgotten, especially if there was cash involved. Some go silent, because well, they got all the cash but none of the bird that goes with being a Nazi and people end up perplexed at why it is they are not in prison. Take serial loud and foul mouth Paul Prodromou. He’s never done a minute behind bars for his activities.

Unlike National Action’s Lawrence Burns of Cambridge, for instance. Burns wrote some nasty things on Facebook and when the police went to see the young man and checked his phone, they found a veritable collection of video nasties whereby Lawrence was taking great personal pleasure in describing to himself what it would be like to have his own Holocaust etc, etc.He was sentenced to four year in prison for being a Nazi ****** last year. We reported earlier this year, that in between the liquid cosh treatment he may or may not be subject to,  Burns had taken to writing poetry.  Well, the staff at HMP Wherever he is should pay slightly more attention to their prisoner. He is showing no sign of improvement in either his political or artistic output. And now his “fans” are even dedicating a website to his poetry with “celebrity” Nazis actually reading his poetry. His latest offering, “The Adversary” is all about- you guessed it, Jews. Those blood drinking tyrants etc, etc. You can read it here, on the left.

Still, one man’s dangerous psychopath is another man’s political prisoner.

Talking of those who do or do not go to prison, who remembers the quite lovely young lad from Swansea called Jack Powell? He’s the little charmer who stubbed his cigarette out on his pregnant girlfriend.  Powell was part of the notorious Powell family attached to the National Front in Wales, and also attached to the quite awful banjo playing, swastika-cake eating rock band Redneck 28.

Anyway, they are not a nice family and are hardly going to win neighbour of the year awards, according to their neighbours. And, their music is even worse than their interior design and dress sense. But when the Powells’ fall out with other Nazis, it is nasty. Ask Jack Powell’s pregnant girlfriend for instance.

Anyway, “ma” Powell has decided she does not like fellow Welsh nasty and former close friend of the family, Luke Pippen (aka Earl Turner). This appears to partly be because Pippen is not in prison and half of her inbred brood have been and are most likely going to be again. By all accounts the local constabulary have been kicking

her doors in non-stop to try and curtail the awful race-hate racket that her and her family are. Oh yes, and because she and the rest of the world believe that Pippen is a grass. Despite the many, many tough-stickers covering his hardly-Aryan frame, Pippen apparently (but unproven) made a secret deal in May of this year so that he could avoid going to prison for his activities. Ever since then, one disaster after another has befallen the Welsh Nazis. The English Nazis who live near them in Swansea however, and have links to terrorism, appear to have no such problems..

And so, issues have been taken with Pippen, who since miraculously escaping incarceration, has taken it upon himself to do whatever he can to undermine the family’s good standing in the community and with other Nazis. Pippen has been burrowing away rubbishing the name of the family and their band Redneck 28 to anyone who will listen. Both sides are accusing and counter-accusing each other of being “Meth heads”, “Smack heads” and worse.

Anyway, this is due to come to a head very soon. The National Front is planning to march in the East Midlands and Pippen is planning on turning up with some new friends he has made in National Action to confront the Chairman of the National Front who is also going around calling him a grass.

Now, you may wonder why the police would want to employ someone like Pippen anyway. We’re not always overly impressed with their methods and intelligence, but what do we know?

A report today claims Nazis are a bigger threat in North Wales than Jihadis are. Bizarrely, some of the most active and dangerous Nazis are in Swansea, on the South West Wales coast. You work it out…

And finally, a very warm welcome home to Mick Wakefield. He got out of prison yesterday. We’re not sure what his conditions are, but as he is currently heading to a Nazi shindig in Newcastle, it would probably be a good idea if nobody told the authorities what he was up to. Wakefield’s return could be very bad news for quite a few other Nazis….