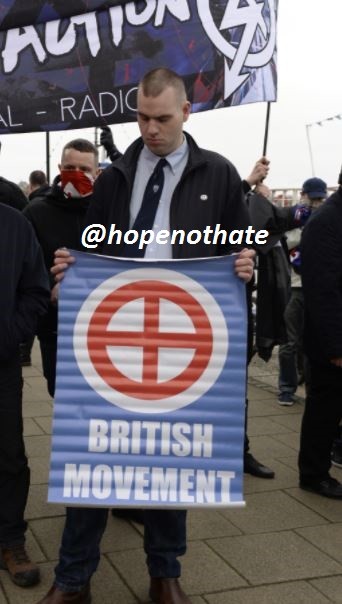 Well, there were meetings and rallies galore over the weekend. You probably didn’t attend one yourself because you were busy washing your hair and not entirely interested in spraying swastikas on toilet doors.

Still, for those who like life with the racial brethren, let’s have a quick run-through the events, starting with the British Movement.

The ‘BM’ regards itself as being at the forefront of the salvation of the white race in this country, but they prefer to do so in secret.

Like the National Front (NF), the BM has been desperate to mop up any spare parts left over from the nazi terror-gang National Action. In the main it is so some young person can at least edit one of their boring YouTube videos properly.

So, much kudos to the 24 people that attended the BM’s annual shindig and piss up on the weekend. They actually (and very proudly) had women there!! Yes, two of them. And they spoke!

The South East branch of the BM was so excited about this that they wrote a thoroughly bloody good review about the sheer and bloody good ‘calibre’ of the membership. Indeed, what with women attending, is it any wonder Kevin Layzell was not in invited? No, it’s not.

Still, the flame of National Socialism may be burning brightly in the bedroom of some faceless, pimply school kid in south-east London, but the English language certainly is not.

How lovely it was (not) for the BM to have the National Front’s Jordan Pont prowling the back of the room acting important, now he is also the NF’s head steward. Jordan last made a name for himself when he was parked up with the leader of the British National Party (BNP) in Sheffield a few years ago. It’s painful but necessary viewing, by the way…

Anyway, according to an unnamed source (Peter Kirby) Jordan made a bit of a fool of himself and was lucky by the end of the meeting that he was just ignored and not put on his backside for being pain in the backside.

Keep up the good work, Jordan. At this rate you’ll be working for me by Christmas…

Kevin Layzell, the NF’s “full time speaker” took his talents down to Southampton and spoke at an NF meeting there. Despite being a “full time speaker” (NF language for “unemployable”) it seems young Mr Layzell is having a few financial difficulties.

He has just suggested the NF give people under the age of 25 free membership. Nice work, Kevin. Let’s hope it keeps your sticky fingers out of the collections in future.

And finally, the rumble in Stoke. Britain First and a host of individuals you couldn’t invent for a knock about on BBC3. Having been accused by my colleague of once or twice over excitedly soiling himself on previous far-right rallies, Liam ‘Walsall’ Jones grew a beard for the event.

I have no idea why he thought that was a good idea. It’s your undercarriage that needs the protection, lad.