HNH explains… The Identitarian Movement and the Alt-Right 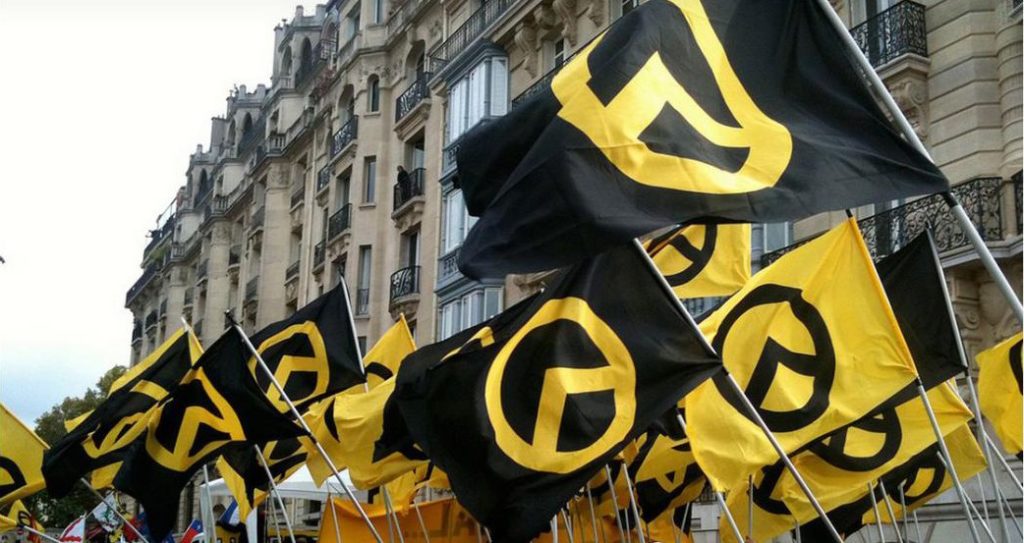 The international Identitarian movement started in France with the launch of Génération Identitaire (Generation Identity, or GI) which was the youth wing of the far-right Bloc Identitaire. It has since spread across the continent with affiliated groups, the most prominent of which are based in Germany and Austria. There is now also a new branch being set up in the UK.

Identitarianism, as explained by a recent article on altright.com “is a metapolitical framework within which Identitarians work to influence political and socio-economic activity in an effort to protect and preserve racial, ethnic, and cultural identity.”

In essence the movement is a reaction against the ‘68ers and their perceived left-liberal dominance of society. One of the movement’s key activists, Markus Willinger, rails in a foundational text for GI against political elites who ‘disgust us’.

Willinger also condemns the increasing acceptance of LGBT+ people in society – what he calls “the union of nothingness” – instead calling for a return to traditional gender roles as “Women want to be conquered”, and outright rejects multiculturalism.

“We don’t want Mehmed and Mustafa to become Europeans,” he says. Instead, GI advocates for “ethnopluralism”.

Yet, as noted above, Identitarians can be concerned with preserving race just as much as culture. Sellner’s inclusion of “culture” in the term “ethno cultural identity” does not prevent GI from having a fundamentally racist ideology.

On the contrary, its emphasis on the preservation of ethno-cultural groups which extends back to an ancient European heritage (“30,000 years” according to Sellner) perpetuates an idea that European ethnic identity is defined not just by these cultures but also to features of their biological heritage.

Indeed, this is put far more explicitly in the UK Generation Identity’s own recommended reading, such as Guilliame Faye’s Why We Fight – a book in which Faye claims that “Identity’s basis is biological; without it the realms of culture […] are unsustainable”.

Sellner himself said in a January 2017 video:

“Multiculturalism is not working at all. In America blacks and white [sic] have been living together for a very long time […] and still it is not working out […] We are committing cultural suicide, there is no reason we should import all those different cultures and people into Europe.”

Crossover with the Alt-Right

Despite the fact that the Identitarian movement is separate and distinct from the alt-right, there are huge areas of ideological crossover. So much so that many leading alt-right figures class themselves as Identitarians.

Broadly speaking, this is the current of thought derived from the ideas of the French far-right philosopher Alain de Benoist and his GRECE movement (Groupement de recherche et d’études pour la civilisation européenne – Research and Study Group for European Civilization) founded in France in 1968.

It also continues in the subsequent affiliated strains of thought/activism from Guillaume Faye’s Archeofuturism, Aleksandr Dugin’s Eurasianism and the European Identitarian movement.

The New Right claims to be an alternative to social democracy and conservative liberalism, a “laboratory of ideas”, a “school of thought”, a “community of spirit”, a “space of resistance against the system”, that has transcended the existing political paradigm of left and right.

Such lofty claims can be dismissed, as scholars have clearly shown the direct ideological parallels with classical fascism and the historical continuity through post-war neo-fascism until the emergence of the Nouvelle Droite (‘new right’) in 1968.

In reality the New Right sits comfortably within the far right and its ideas are best understood as a quest for the recovery of a mythical ‘European Identity’. It fundamentally reject the ideals of the Enlightenment and of Christianity and fighst back against the ‘materialist’ ideologies of liberalism to socialism, instead positing a pan-European nationalism and a world of ethnically homogeneous communities.

At the forefront of American Identitarianism has been Richard Spencer and the National Policy Institute (NPI), which at one point organised a ‘Why I’m An Identitarian’ essay contest. There are also American alt-right groups such as Identity Evropa that style themselves as ‘Identitarian’. There is no question that the American alt-right has drawn ideological inspiration from this European far-right movement.

However, the relationship goes both ways across the Atlantic and we have increasingly seen European Identitarians adopt the moniker of alt-right. Take for example the advert for this year’s Identitarian Ideas IX conference in Stockholm in February, which was described by the European organisers as “the most important AltRight event in Europe”.

The European Identitarian movement has served as both an inspiration to the American alt-right and serves as a clear example of how the international Alternative Right is best understood as a transatlantic amalgamation.

As well as influencing each other in terms of ideas and tactics there is increasing transatlantic cooperation between these movements.

However, the best example of cooperation came with Generation Identity’s ‘Defend Europe’ project over the summer of 2017.

He went on to state: “This is encouraging news. Young Whites are waking up to their disenfranchisement across the White World. The future belongs to us.”

Daily Stormer founder Andrew Anglin wrote in one article that Defend Europe’s efforts would “have a massive impact” on the “media narrative”, which would be forced to acknowledge that “NGOs are engaged in a criminal human trafficking racket that is being funded by the state and private Jews”.

As well as the more extreme alt-right, the Defend Europe project has also been welcomed by key players in the more mainstream alt-light.

The reactionary “news” outlet Breitbart has provided sympathetic coverage for Defend Europe’s dangerous mission. Breitbart London reporter Chris Tomlinson penned multiple articles over the past year presenting positive portrayals of the Identitarians and just last week the website carried a less-than-critical article about an banner drop on Westminster Bridge by Generation Identity in the UK.

However, the Identitarians’ most vocal North American supporter has been the Canadian alt-light journalist Lauren Southern, who accompanied Defend Europe on its first seaborne mission and during its time in Catania, Italy. Alongside her was alt-right vlogger Brittany Pettibone, who also joined the crew in Italy and has accompanied Martin Sellner frequently since in the US and Europe.