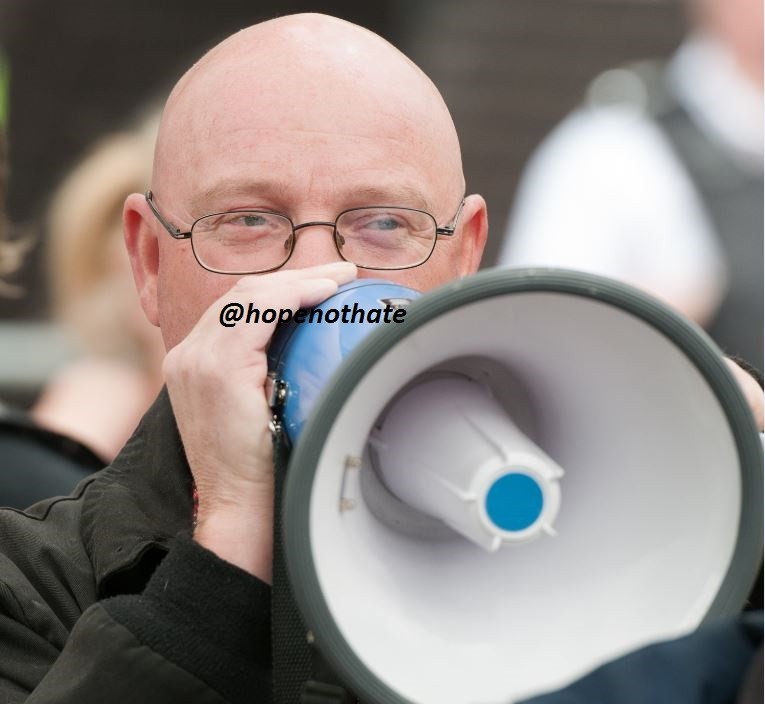 There’s many ways to describe the National Front’s (NF) lone and lacklustre drummer boy, Mac McElhinney. Shite is certainly one way.  Shameless is probably another. He simply cannot play the drum and walk at the same time- though this has not stopped him trying.

He even embarrasses other nazis. He’s like a ‘rent-a-shit drummer’ experience for the Fuhrer fiddlers.

McElhinney’s drummed for most British nazi groups. He was a real regular in the good old days for the South East Alliance. Many a time did their toilet mouthed leader Paul Prodromou complain that McElhinney’s poor drumming was detracting from his own horrendous performances. “De peeps can barely hear me fecking swear” he would have probably said.

But at today’s National Front shuffle of shame through London, McElhinney seemed to have forgotten his drum.  Maybe he was missing his old “mate” Mike McCusker who has recently been drummed out of the NF [good pun, ED] over a number of issues that we will not repeat here out of respect to the victim. Oh yes, and for allegedly passing us information.

Whatever has happened to McElhinney’s drum, it had him tossing and turning last night with worry.

No, the little drummer boy dreams only of firebombing our offices.

We’ll pass that on to the plod, mainly so they get to have a look in that tool box under McElhinney’s marital bed.

And the drum was not the only thing missing for the NF today. Having returned from a “lads” holiday potentially a bigger virgin that when he left our shores ten days ago, perennial wally Jordan Pont managed to lose four of the NF’s limited edition steward vests.

Well, he thinks he has lost them. I hear one’s already being raffled off by some Anarchist who re-appropriated it when gormless Pont dropped it in his rush to get downing some lager shandies with the rest of the NF hard-men who still live with their parents.

Hat tip to Mick for the tip off.