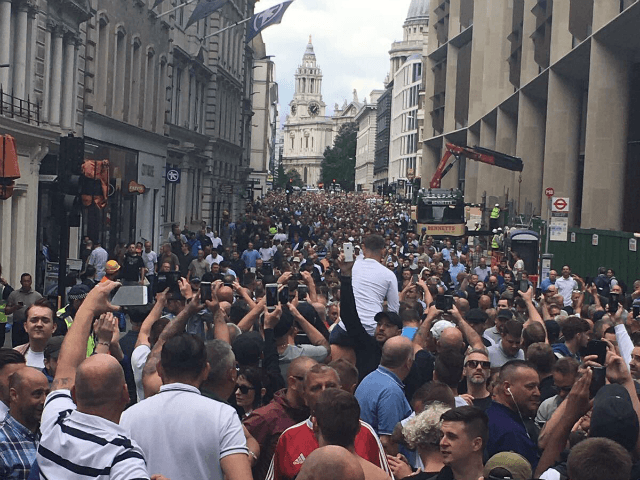 UKIP’s Islamophobic interim leader, Gerard Batten, revealed to supporters via email yesterday that he had been in talks “going back some months” with the leadership of the FLA and linked street movement, Veterans Against Terrorism (VAT).

Batten has also allegedly been holding meetings with the leadership of the Democratic Football Lads Alliance (DFLA), an FLA splinter.

The FLA emerged in the wake of last year’s terror attacks and was able to mobilise up to 50,000 people onto the streets of London last October.

Batten has approached supporters of both FLA and VAT to join UKIP. Batten has even offered a reduction of membership fees from £35 to £20 in an attempt to recruit from these groups, which have both recently publicly backed Batten and UKIP.

The move comes at a time of crisis for the battered party, which is facing its fourth leadership election since Nigel Farage resigned in 2016. Haemorraging members and finances, it is facing massive legal costs – likely to be in the hundreds of thousands of pounds – after UKIP MEP Jane Collins defamed three Labour MPs.

According to leading DFLA member Justin Smith, Batten held meetings with members of the DFLA council at a meeting in the House of Lords on Monday 26 February where he laid out his “plans to tackle extremism”.

Extraordinarily, Smith even claimed that DFLA was “helping UKIP with their strategies, policies, publicity, marketing and Membership Promotion.”

Batten is also purportedly due to speak at the “Justice for the 21” march organised by DFLA on Saturday 24 March in Birmingham.

The FLA is a football-hooligan street army which formed in response to the tragic terror attacks of last year. “Lads” is used as a euphemism for current and ex-football hooligans.

The Democratic Football Lads Alliance split from the FLA in February due to a monetary dispute with FLA leader John Meighan, which the DFLA has called a “self serving, egotistical, forever the victim, charity rip of merchant”.

Another splinter from the FLA is the Anti-Terror Alliance (ATA). In our State of Hate report, HOPE not hate exposed one of the leaders of ATA to be the convicted terrorist Frank Portinari, the British Commander of the banned terrorist organisation Ulster Defence Association (UDA).

The fact that UKIP has resorted to offering lower membership fees to such groups in order to boost membership is indicative of the crisis engulfing the party, which has been spiralling out to the far right margins ever since its success in the EU Referendum.

The party’s woes have been dramatically compounded by recent scandals surrounding ex-leader Henry Bolton, who was given the boot at an Extraordinary General Meeting in February.

The penniless party is now starting down the barrel of yet another leadership election and a whopping legal bill, after MEP Jane Collins was successfully sued for defamation by three Labour MPs that she had accused of ignoring child sexual abuse in Rotherham.

Batten also announced yesterday that he will be writing to 20,000 ex-members in an attempt to revive the party.