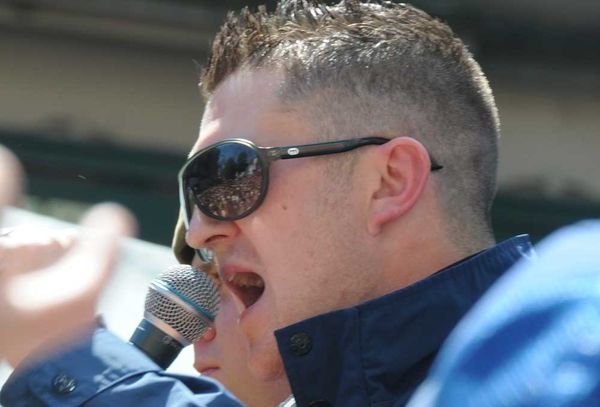 Lennon, the former leader of the anti-Muslim street gang English Defence League (EDL), delivered a speech written by Martin Sellner, the leader of Generation Identity in Austria, who was recently refused entry to the UK.

The UK branch of GI –  who held a small demonstration in Hyde Park last Sunday – were in attendance again yesterday, distributing leaflets to the crowds.

Much like the EDL days of old, scuffles broke out as soon as the crowds amassed, and chants of “Allah is a paedo” and “Oh Tommy Tommy” rang out across the park.

Fights already breaking out between both sides at #SpeakersCorner pic.twitter.com/QGfqfZS12t

Arriving in a white van and ushered into the park by heavy security, Lennon was greeted by the crowds like a returning king.

Lennon’s entourage for the day included his cousin and former EDL co-leader Kevin Carroll. However, one person who didn’t make it was the far-right founder of the anti-Muslim street movement Pegida Lutz Bachman who was refused entry to the UK.

Whilst most in attendance couldn’t hear the speech or even see Lennon, as there was no podium or amplification, copy of the speech has been subsequently released, full of Generation Identity rhetoric and terminology. That Lennon was willing to read out a speech of this nature, on behalf of Sellner, is further evidence of his increasingly close relationship with GI.

Lennon later claimed that 45,000 people watched his livestream in the park, which is perhaps unsurprising given that the event was trailed by Alex Jones of the American conspiracy theory outlet Infowars.

The crowd consisted of an interesting mix of activists from numerous far-right, anti-Muslim and street protest movements.

A representative from Anne Marie Waters’ fledgling anti-Muslim party For Britain addressed the crowd, calling on people to join up. Waters herself was a notable absence, although she did have her own demonstration the previous day in Milton Keynes, which drew just 30 people.

Numerous people in Britain First merchandise were also present in Hyde Park, and many familiar faces from the old EDL were there.

Yesterday once again proved that Lennon still has the ability to attract large numbers on the streets and is liked and respected by a broad range of groups on the radical and far right. His increasingly close links with Generation Identity in Europe and the UK is certainly something to watch.

Yesterday was also another example of how the far right, on both sides of the Atlantic, has increasingly sought to use the issue of free speech to advance their own politics. While generally employing a level of hypocrisy around the issue, they know it plays well with a broader audience than they might usually expect to reach.

Upon leaving the demonstration yesterday, Lennon promised to return to Hyde Park again next weekend.

After the event Lennon headed to a pub alongside Raheem Kassam of far-right news outlet Breitbart London who had also attended the speech.