Generation Identity Conference: A shambles from start to finish 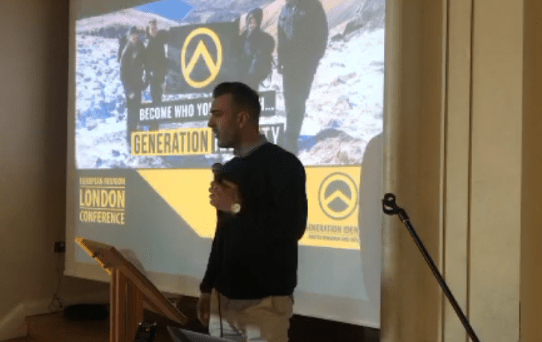 Generation Identity United Kingdom and Ireland (GI UK and Ireland), the domestic branch of an expanding anti-Muslim and anti-migrant movement, today attempted to hold its first conference on UK soil. GI is now active in 13 countries across Europe and North America and best known for its dangerous Defend Europe mission.

The ‘European Reunion’ conference was due to be addressed by co-leader of the Austrian branch of GI and de facto spokesperson for the movement, Martin Sellner, Italian GI co-leader Lorenzo Fiato, Hungarian GI co-leader Ábel Bòdi and Annika Franziska from the GI-linked #120dB project in Germany. In addition to this, GI UK organiser Charlie Fox (AKA Charlie Roberts), GI UK and Ireland key organiser Tore Rasmussen, and GI Ireland co-leader Deirdre McTucker (AKA Damhnait McKenna) were billed to speak.

The planned event was clear evidence of the importance the GI leadership in Europe is placing on the fledgling UK branch as its gateway to the Anglosphere. Yet, despite being GI’s inaugural UK conference, and featuring speakers from across the movement who flew in for the occasion, the 14 April event at Sevenoaks’ Stag Theatre was a shambles from start to finish. GI UK and Ireland was beset by problems from the off, with a slew of planned speakers unable to even make it to the conference. Fiato announced on Twitter on 12 April that he was ill, and then Bòdi and Sellner were barred entry into the UK at Stansted and Luton airports, respectively, on the Friday before the conference.


Sellner’s evening evidently got a lot worse when he read (while in the queue for passport control) HOPE not hate’s new report on GI UK and Ireland, which profiles its members and their links to the far right and explains their coded prejudice for what it is.

Just days before the event, GI was forced to change the venue. Though initially planned for London, following “panicked phone calls” GI had to move the event to The Stag Theatre in Sevenoaks, Kent. Not wishing to ruin their fun too soon, HOPE not hate did not reveal the venue prior to the day.

In retrospect, it might have been kinder to have done so. After a late start from technical problems which carried on throughout the conference, what followed was a succession of largely uncharismatic monologues, at best awkwardly delivered and at worst barely delivered at all.

Owing to the diminished bill, the GI UK and Ireland activists went back-and-forth giving their own and their European branch members’ speeches. First to speak was GI UK activist Tom Dupre, before Fox, Rasmussen, Fox again but (barely) reading Sellner’s speech and joined halfway by a flustered Rasmussen who had to hold a phone up with the speech on for Fox. This was followed by Rasmussen, again, and McTucker, before Dupre read Bòdi’s speech.

The event ended with a different representative of #120dB speaking than advertised, Cologne-born Freya Honold (of the Dresden branch of GI Germany), before GI UK and Ireland activist Benjamin Jones closed the talks having to shout as his microphone had stopped working.

On the road again

After allowing GI activists to fully make a fool of themselves multiple times over on camera and on GI’s own livestreams, HOPE not hate revealed the location of the venue which resulted in GI deciding to move on (something the GI livestreamer neglected to realise was being broadcast, believing filming to have ceased).

Though claiming they would reconvene elsewhere and announce the new venue off camera, GI activists and the conference attendees at first only managed to amass down the road outside a branch of the Bill’s restaurant on London Road. Soon after, with some GI members in cars and others walking alongside conference attendees, the crowd were escorted by police back round the corner to The Chequers pub on Sevenoaks’ High Street. Again, however, they were soon on their way out of Sevenoaks, with some intending to reconvene back in London.

Around half of those at the conference were active GI members while the other half were newer or less active members. In addition to the speakers,also in attendance from GI UK and Ireland were Damien McAlinder, Seb Seccombe (AKA Seb James), Gabriel Harrison, Ryan MacPherson, Jake MacNamee and Harrison Clewes, as well as Aurelija Aniulyte of GI Denmark.

To learn more about GI UK and Ireland, remember to check out the new HOPE not hate mini-report. 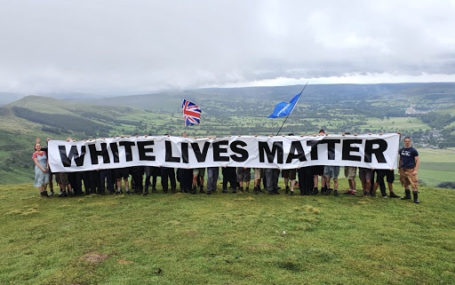 Rising Racial Nationalism in the age of Black Lives Matter