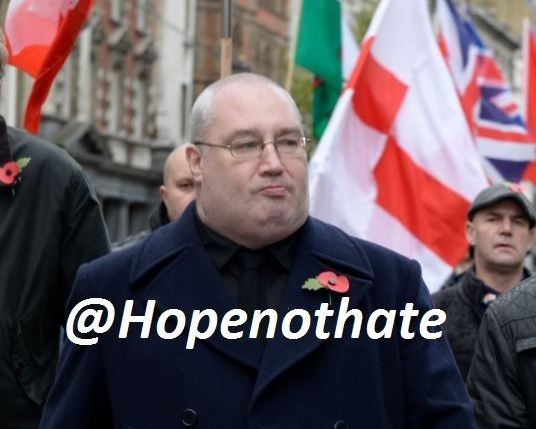 We have often queried the wisdom of those still using the name of the National Front (NF).

It (the party) is a wholly shambolic party riven with drunken acts of Nazism and disaster. It has remained a legal organisation for over 50 years primarily because it coughs up and pays the Electoral Commission for occasional forays into the electoral abyss.

Normally when its electoral results are announced, it is dragging somewhere behind the Monster Raving Loony Party.

The party Chairman Kev Bryan has been a long-time crafty sort, and I mean not creating furnishings in his shed.

The party has been run into the ground almost since the day it was formed. Those who did so were angry white men who always felt Britain should never have gone to war with Nazi Germany.

Last year I wrote how the party was the focus of a concerted effort by people in the London Forum and those formally in the nazi terror gang National Action for a take over.

The party’s former deputy leader Adam Lloyd even complained that HOPE not hate was making the party look silly.

Of course, we never had to try hard to make the party look silly. The NF has been one endless line of drug and spousal abuse for the past five or six years.

Even we, with all our supposed mysterious powers, cannot force people to deal drugs, stub out cigarettes on pregnant girlfriends or even try and bite the nose off a complete stranger in a pub.

No, the NF has been rotten because it is full of rotters and plonkers.

We caused it tremendous grief earlier this year when we pointed out the state and condition of veteran neo-nazi Richard Edmonds. We alleged the party was bleeding him dry of his retirement money to such an extent he was forced to tape his clothes together while also funding the NF.  I stand by that.

It appears last week things came to something of a head when the cerebrally-challenged party leader Kev Bryan got so pissed he sent out an appeal for love from other senior members of the party – by resigning while sitting lonesome at a bar in Baccup in Lancashire.

Instead of calls for him to remain in post, Bryan has now found himself forced from the party as others go in search of the £80 beer expenses the leader of the party is allotted. Talk about ‘virtue signalling’ going wrong: not one person asked Bryan to remain in charge or at least go home and sober up. Instead he is being positively driven out of the top post.

The party’s recent non-adventure in Wakefield was probably the final nail in his ever opening and closing coffin.

The race is on…

Of course, Bryan’s departure opens up all kinds of possibilities. A recent court case in Birmingham provided a document about the planned takeover of the party by certain sinister types operating behind the party’s South West organiser, Julie Lake.

So, while it’s goodbye Kev Bryan, let’s take a look at the next potential leader of the NF:

Croydon-based Martin is very popular with the membership and is currently the party’s Deputy Chairman. He was however, called a “****** *******” by Kevin Layzell, who appears to be jealous of Martin’s prowess with the more mature woman.

What a laugh Lyazell is, his other story about Kev Bryan defecating into a Tescos shopping bag while leafleting is real class. Should he be telling people party strategy so widely, however?

No-one takes Jordan Pont more seriously than Jordan takes Jordan Pont. He recently walked out of the British Movement because they do not hate Muslims enough. Pont is the current head of NF security and bought himself loads of Nazi patches to sew on his jacket to make himself look tough.

He is telling others that he will be Chairman because Tony Martin’s carousing is an embarrassment. Pont has never had a girlfriend, mind.

The NF’s racing ‘tipster’, Lake offers tips on horse racing which involves her tipping five horses in an eight horse race and then claiming she is an expert. Martin Wingfield she ain’t, kids.

It’s understood Kev Bryan has also been asked to pay back monies owed to the Bristol-based nazi, but as of yet not one of the tips she has given him has crossed the line allowing him to do so.

Unlikely she will get the top job, because she is a woman and also the person who is supposed to be the stalking horse for Larry Nunn to break party rules and get the top job.

‘Little Kev’ has been making us laugh for years and years. Sadly, he has of late turned into somewhat of a drunken gossip on those unrequited trips to Poland with Maria from the Polish Nazi group, NOP.

Kevin is the NF’s self appointed ‘international liaison’ and recently tied the NF into a tryst with some Polish nazis, much to the chagrin of his poor mother who had to make them all a pot of tea and some Marmite sandwiches.

Expect Kevin to get expelled the minute he starts telling similar stories to the NF’s new leader that he did about kev Bryan.

He’s got the money, he’s got the influence, he’s got a bad back. He’s also got a 25-page document on how he can make the NF better if Kevin Bryan is dumped.