Labour and antisemitism: the way back from this new low 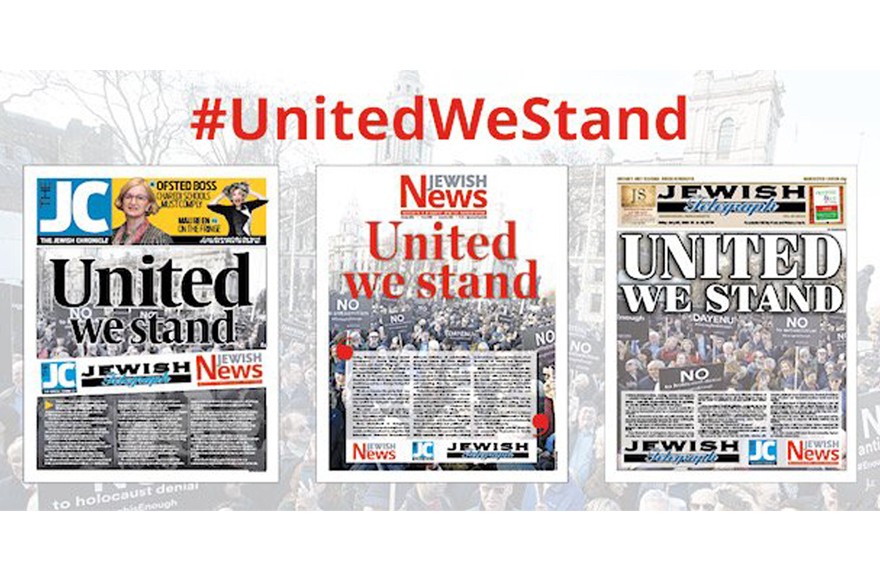 Earlier this year, Jeremy Corbyn said he was “sincerely sorry” for the pain caused by antisemitism in the Labour party. “We recognise that anti-Semitism has occurred in pockets within the Labour Party, causing pain and hurt to our Jewish community in the Labour Party and the rest of the country.” The issue is not whether there is a problem of antisemitism within the Labour party. From the leader of the party down, the problem has been identified as existing, and as causing pain for the Jewish community. The only question is whether Labour has done enough to tackle it.

The decision by the three major British Jewish newspapers to publish a joint statement about their fears for Britain’s Jewish community under a Jeremy Corbyn government shows that Labour has failed to make good on that apology in March. It marks a new low in the relationship between British Jews and Labour.

It is now immaterial whether or not Labour really does pose an “existential” threat to British Jews. That is the perception felt by a growing number of British Jews right across their community. Some people are talking about leaving the country if Labour wins a General Election. The fact is that a large number of people in the Jewish community are fearful of the prospect of a Labour government.

This is the view of many British Jews. We must accept that, and we have to deal with it. It is not my position as a non-Jew to deny the right of my Jewish friends to feel as they do. That’s not how we approach the racism suffered by any group. It cannot be the position of the Labour Party to dismiss their concerns.

The joint statement should be a matter of shame for the Labour Party. Labour MPs, the NEC and Labour Party members need to look at themselves in the mirror and ask how they got to this position.

For most of the last century the Labour Party was the natural political home of British Jews. Jewish people made up the ranks of the parliamentary Labour Party, were heavily involved in the trade union movement and provided much of the progressive intellectual backbone of the left.

Compare that to the situation now, where only a tiny minority of Britain’s Jewish community will vote Labour and many are genuinely scared about the prospects of a Labour Government.

The relationship between the Jewish community and Labour is close to irreversibly breaking down. So much damage has been done. But if Labour is to have any hope of reversing the situation then it needs to demonstrate that the Jewish community does not have to fear the Labour Party or a Labour government and this will require real and significant action, not just words.

On every occasion that the Labour Party has clashed with the Jewish community over the last few years we have heard statements from the party leadership condemning antisemitism, and that they will listen and talk to the Jewish community, take swift action to deal with antisemites within their party and increase internal education. These words – from Jeremy Corbyn on down – have been strong statements, but on each occasion these words have not been followed by strong actions, only increasing the perception amongst the Jewish community that the Labour Party simply does not care if they are ignored, offended and insulted.

There is a clear pathway. Firstly, Labour should listen to the Jewish organisation within its own party and adopt the full International Holocaust Remembrance Alliance (IHRA) definition. The party cannot put itself in the position of saying that it understands antisemitism better than those who suffer it. I cannot believe that the Labour Party would devise a policy on racism without leaning on the experience and wisdom of the black community. I certainly do not believe it would craft a definition of Islamophobia without taking guidance from Muslim organisations.

It is the internationally recognised definition of antisemitism and, contrary to the opinions of some of its detractors, fully allows criticism of the policies and actions of the Israeli government. Just this week, the ruling Labour group on Bradford City Council, supported by the Bradford Council of Mosques, moved to enshrine the IHRA definition in council policy. It was uncontentious and unanimously accepted. Bradford Council is hardly alone: the full IHRA definition has been adopted by councils and CLPs up and down the country.

Secondly, the party should drop the disciplinary action against Margaret Hodge MP. Within hours of her calling Jeremy Corbyn a “racist and antisemite” she was notified that she was facing disciplinary action. Compare this swift action to the Labour Party MPs and party members who have waited months, if not years, for their own complaints of antisemitism, misogyny and abuse to be heard or the fact that Labour couldn’t get itself to expel Ken Livingstone despite his repeated anti-Jewish slurs. If nothing else, this is a severely damaging pursuit, from an internal Labour Party perspective, of a Jewish MP.

Thirdly, Labour should move much more quickly to implement a political education programme, including trainings, across the Labour grassroots, starting at the Labour conference and “The World Transformed” event. This political education should be led by Labour’s leadership. We’ve heard great statements from the likes of John McDonnell, Jon Ashworth and Rebecca Long-Bailey. The route back on this issue for Labour has to be led from the top.

Rather than hiding behind a defence of right-wing conspiracies, denial and weak claims that their position has simply been misunderstood, Labour needs to read and re-read the joint statement in the Jewish papers and take stock of the severity of what is happening – and make a real commitment to change. Words are no longer enough, only action can create any hope of halting the slide. For Labour’s own sake – but more importantly, for the cause of fighting the scourge of anti-Jewish racism in this country – it must adopt the IHRA in full.

If it does nothing then expect even worse headlines in the future.

The ball is now in Labour’s court.