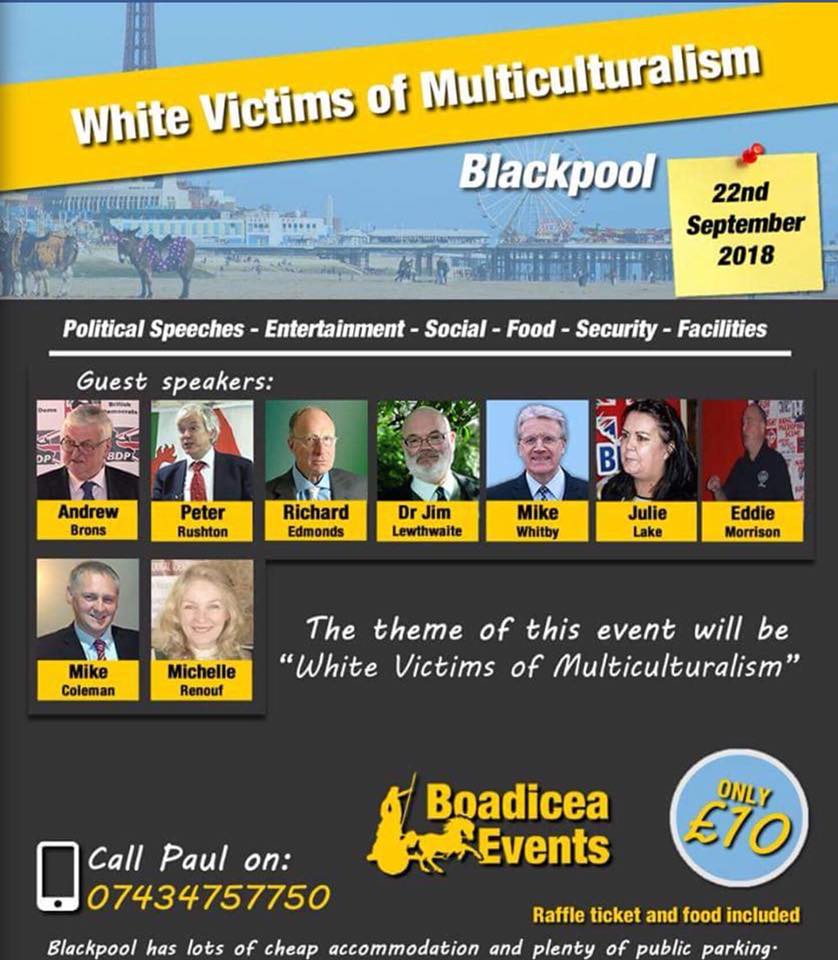 I don’t know what it is about Blackpool that attracts so many people from the British far right to go there, misbehave and leave.

It’s fair to say the poor town has been plagued over the years by fascists, fantasists and nazis, and it shows no sign of slowing down or even stopping.

It helps somewhat that there appears to be a plethora of desperate landlords with dingy establishments willing to allow almost anybody to swill and Nazi salute in their bars/social clubs.

The nazis of course, prefer it to be dingy where they socialise. And when I say dingy, I really do mean dingy.

The British National Party (BNP) used to hold their annual festival of the toilet incidents in such an establishment.

Given their dying party’s obsession with killing its members off, it came as little surprise that the venue they particularly favoured for their annual conference for years was actually certified as a death-trap. The BNP was positively proud of the fact, too!

In exchange for the party’s non-complaints about the Kimberley Hotel’s dangerous wiring, flat beer, cockroaches, rats and even the odd occasion of suspected faecal matter in a buffet lunch, the BNP’s favourite establishment in the town used to repay the favour by turning a blind eye to the party’s own bad behaviour.

The BNP’s most pernicious and downright scandalous crime was of course campaigning that local schoolgirls in Blackpool were being murdered by the local Muslim community.

The BNP quietly dropped this campaign when one of their own was convicted for actually murdering a local schoolgirl. It’s a pretty grim story if you do click on that link, but suffice to say the local BNP was the most active grooming gang in Blackpool for years.

Sadly, some people still claim that local girls are chopped up and resold as kebab meat. The whole sorry, true and sordid tale will (pray G_d) come to light one day soon.

Another in a long list of recent nazi events is planned for this Saturday at the Talbot Social Club in Blackpool.

It’s a top-table event of some of the most pre-eminent, bizarre, ludicrous, drunken, treacherous people fascism has ever thrown together.

Run once more by ‘Boadicea Events’, this conference, as per-all-the-usual ones they have held, will have parking, entertainment and political speeches.

It’s a mighty rum lot, too. So, here is a list of the sort of entertainment £10 will get you this weekend:

Andrew Brons: Probably old enough to have met the actual Boudica herself, Brons was once an MEP for the BNP. Then he and Nick Griffin had an almighty fallout in Brussels (probably over the duty frees). Anyway, this video of them falling out is hilarious.

Brons then challenged Griffin for the leadership of the BNP. Griffin probably cheated, because Brons lost. Brons then formed the British Democratic Party and appointed a chairman he would later complain had a regional accent so strong he could not understand him. These days Brons is forced to talk a lot about John Tyndall, a man he never particularly liked.

He’ll talk about: The cricket test. But not the one we won with Muslim bowlers.

Peter Rushton: Peter does not like Jews. He likes Iranians (well, their money anyway), and carrying the bags of posh women. Oh yes, he was also a major friend of the banned terror group National Action. He positively loved them.

Richard Edmunds: Everyone’s favourite Nazi. Old Dicky is even older than Brons and has been around for years banging on about Jews. Sadly, the once fearsome firebrand is now little more than a side-show whose pension gets bled every Thursday by those scoundrels in the National Front.

Richard was once sent to prison for smashing a glass into the face of a black man who had the audacity to walk past him with a white woman on his arm. You get the picture..

The once resplendent bagman for the BNP founder John Tyndall is these days often found wondering around with a coat held together with tape.

He’ll talk about: The Jews.
Won’t talk about: His wedding night above the shop in Upper Wickham Lane.

Dr Jim Leithwaite: Not the sort of doctor who can legally check your prostrate and charge you forty quid for the pleasure, Jim’s been around for years. Ask anyone in Bradford. He’s lost more elections than Nigel Farage. He was actually a councillor for the BNP when it was big news in Bradford, but that was yonks ago.

These days it appears Jim is the only other member of the British Democratic Party, but I repeat, not the sort of doctor that can save it.

Lately (and unsurprisingly) he appears to have joined the ranks of people who feel they should pay for nothing in life. This ranges from their television license fees, to mortgages and even loans and credit cards. Often Mike can be found outside the BBC’s plush gaff in Salford with a placard banging on about the illuminati, lizards, Jews etc, etc.

He’ll talk about: The illuminati, Jews and Rupert Murdoch
Won’t talk about: Where the collection tin went.

Julie Lake: Bloody ‘ell, she gets about a bit. Fresh from exchanging handbags in the National Front, Lake will probably get lost on her way to Blackpool and wander the streets of Blackburn instead.

Despite being something of a matriarchal figure for the lost boys of National Action, she does love bragging to journalists that her father was one of the liberators of the Nazi death camps at the end of World War Two. How this story will go down to an audience of people who say there were no Nazi death camps or gas chambers, will be a delight. Shame the meeting isn’t in Blackburn, mind.

Will talk about: Jordan Pont. Give it up guys, we know it’s love…
Won’t talk about: The time she got arrested at her local war memorial.

Eddie Morrison: Well, they did promise there would be entertainment at this bash! Eddie Morrison is a legend among British nazis. He has put the party into every far-right party there has ever been. He’s done the lot – mainly pissed. Been there and split that, etc, etc.

Recently he’s been putting out some shoddy leaflets in Dewsbury while trying to start a campaign to be allowed back into the National Front. Those fools forgot to formally expel him when he left in a huff two years ago.

These days he keeps the local plod otherwise engaged by ringing them with stories about the NF’s gestapo, led by Jordan Pont, making threats to his life.

Will talk about: Why he is the true heir to the National Front throne.
Won’t talk about: That time Kevin Watmough had to help him out of the bath.

Mike Coleman: Coleman was once a very, very big shot in Stoke BNP. Stoke had, for a while, a considerable BNP branch and councillors. Then he got in a spot of bother with the law and narrowly dodged chokey. Then again the branch split and went to war with each other. As you do. These days Coleman has been toying with a few new parties and ideas, even travelling as far as Telford with his old mate Alwyn Deacon.

Coleman should be a right laugh. Not.

Michelle Renouf: These days “Lady” Renouf splits her time between England and Germany, where she apparently is the hostess with the mostest when it comes to a soirée. There is some argument as to whether Renouf is a Holocaust denier or a Holocaust “revisionist”. Why argue? They don’t talk about her much back home in Australia anymore, but she did once cut quite a dash.

These days her life is slightly more mundane, that is when she is not, of course, jet-setting off somewhere to set the record straight about the Holocaust or those “repugnant” Jews.

The international movement that obsesses with besmirching the memories of Holocaust victims has been somewhat split over an argument that has raged between Renouf and her (now) arch nemesis, the adorable Alison Chabloz. Apparently the two shared a house until quite recently when there began the most awful of bust- ups over a carton of milk left in the fridge.

No sooner had the whole milk saga blown over like a storm in a tea cup, it appears the posh derriere of Renouf required the use of some soft, strong and very, very long toilet paper. And so, she used some that belonged to Ms Chabloz. I kid you not. It started a flurry of emails that even had eminent Australian toilet/Holocaust expert Freddy Toben forced to choose sides. It appears Chabloz is on the outside toilet, here.

The whole toilet caper came at a time when many on the international Holocaust denying/revising scene were tiring of her antics if not her music, anyway. And so seems there was no conceivably better or fortuitous time to pinch a loaf for Ms Renouf, who has risen from the throne as it were, quite victorious. And relieved.