Fear, Hope and Loss: Understanding the drivers of HOPE and hate

HOPE not hate was founded on the very principle that if we are to counter narratives of hate, we must offer hope. This means building stronger communities. Our research looks into the scale and drivers of fear and hate, what gives us hope, and what can bring us together. 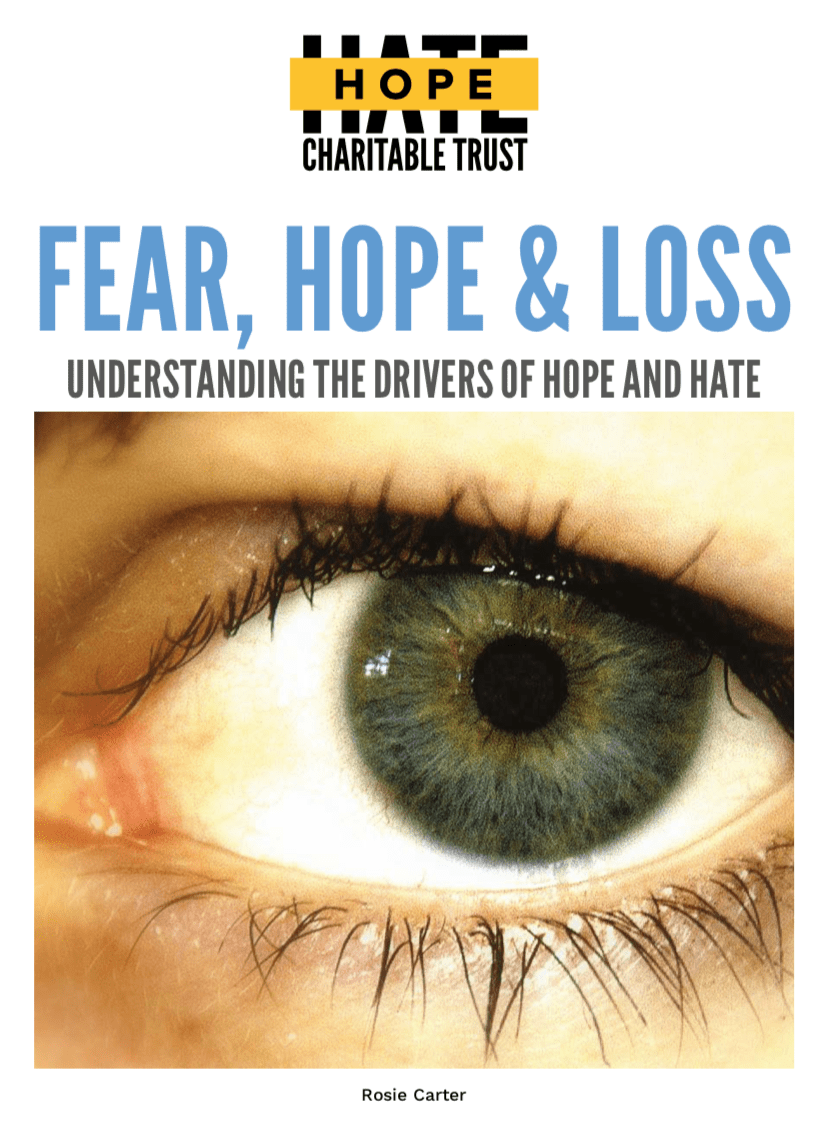 The EU Referendum result was a political earthquake that should have shaken Westminster and Whitehall out of its unthinking complacency. But instead of addressing the underlying conditions which have fuelled, not only Brexit, but the rise of populist movements and the advent of strong man politics across the world, we have reverted to type, content to deepen our divisions rather than bring people together.

This week new research from Hope Not Hate and Centre for Towns refreshingly sought to listen, not lecture, those leave voters in areas where fear and anger have replaced hope. The findings are stark. In Britain, as elsewhere, decades of rigid economic dogma have left many communities feeling excluded from an economy which appears to benefit other people, abandoned by mainstream politics and angry about it. They can no longer be ignored.

The report provides the most comprehensive evidence yet that in communities where decades of neglect and deprivation have been felt the hardest, anger is at its most intense. Brexit provided a megaphone for that anger to be broadcast right into the heart of Westminster. Is anyone listening?

The story it reveals is one of loss. Over many decades, the decline of manufacturing industry and decisions by successive governments of all political parties to concentrate investment and opportunity in the cities has aged our towns; leaving many of those communities with a perfect storm of high deprivation, crumbling infrastructure, a dwindling skills base and high levels of dissatisfaction with the status quo. The loss of good jobs has split families apart and denied people the agency they demand in order to build a better life, with work that provides dignity and purpose, security and hope for the future. Rapid economic decline has rendered many people utterly unable to adapt to changed circumstance. While unsurprisingly the most negative attitudes to immigration, multiculturalism and diversity are found in such communities, so too are some of the most robust responses to it. There is a belief that nobody is fighting for their social and economic interests.

Not that these are solely economic challenges. Far from it. Communities across the United Kingdom, as this report outlines, display the outward signs of an overwhelming sense of displacement, powerlessness, and loss; most starkly in our post-industrial and coastal towns. Take the East Marsh area of Grimsby: once a thriving fishing community, it has experienced among the highest levels of relative decline in the UK. Those young people who could, grasped the opportunities opened up to them and left. Those who remain are among the most ‘disengaged’ in the country according to one 2011 study. No wonder that in such communities, marginalised and facing a plethora of challenges, ‘take back control’ had such resonance.

The report describes the emergence of two distinct tribes, divided between hope and fear. This is what the academics Will Jennings and Gerry Stoker described as the ‘Two Englands’ revealed by Brexit.  In our cities, often cited as the engines of economic growth, “confident multiculturals” see immigration as overwhelmingly positive while in towns only a few miles away, the picture is turned on its head. The effect has been the transformation of the electoral map.

This report exposes what happens when choices are made between these Two Englands, when you allow the collapse, not just of jobs and spending power, but of any sense of hope in those communities unable to adapt whilst rewarding and empowering those cities already well-placed to benefit. The stark warning is that a widespread sense of hopelessness, left ignored and unaddressed, provides fertile ground for the far right. But more importantly, this report provides a template for understanding how addressing the underlying conditions can turn this around.

And there is hope to be found. On the East Marsh estate in Grimsby residents formed a community group, East Marsh United, in the belief that if change is coming, they must build it. For all of the challenges they face, there is power in these communities. But for it to be felt politics must change. Our job is to create a catalyst for that power, in East Marsh and elsewhere. The widespread anger has arisen from a knowledge that life could and should be better in areas where people long to ‘take back control’ but are denied the power and resources to do so.

Anger is not apathy. People rightly demand, and deserve, a greater say in the future of their community and country and the power to build the ambitious, inclusive communities they long for. Our task is to match their ambition with a vision for every part of the UK that delivers on the priorities in those communities. In the end a remote power, distant from the lives it presumes to understand, has stripped people of agency in their own lives. This is the great lesson for politics that we must urgently address. This report is deeply challenging the status quo and matters all the more for it. It connects up historic economic decline with a loss of agency and control by people in our towns. The far right offers no answer to this. We must.

Lisa Nandy
MP for Wigan
Lisa Nandy was elected as the Member of Parliament for Wigan in May 2010.

Fear, Hope and Loss is an exploration of what drives hate

HOPE not hate was founded on the very principle that if we are to counter narratives of hate, we must offer hope. We have long understood hate to often be a response to loss and an articulation of despair. But when given an alternative, especially one that understands and addresses their anger, most people will choose HOPE.

Since 2011, we have tracked public attitudes to race, faith and belonging in our Fear and HOPE reports. While the debate often gets split into identity issues versus standard of living, our research, recommissioned four times over the last seven years, finds that drivers of hate are often more complex and identity issues are dialled up or down depending on how the economy is doing.

Fear, Hope and Loss is an exploration of what drives hate, and what offers resilience to these narratives; what offers hope. While individual factors are important in framing how we see the world, these factors sit within a broader context of how people experience daily life.

It is no coincidence that our fight against the far right has taken us to Oldham, Grimsby and Thurrock, but not Oxford, Hampstead or Guildford. Our report finds that it is communities which have lost out most to globalisation, isolated coastal towns, post-industrial towns once reliant on single industry which have seen rapid decline. We find that a sense of hopelessness that the most hostile attitudes to migrants and minorities are concentrated.

There is no need to pander to prejudice in addressing the strong tide of anti-migrant sentiment. Given that the areas with the most hostile attitudes are those with some of the lowest levels of immigration in this country, reducing numbers of immigrants alone will have little impact of the attitudes of these people.

It is in communities which feel the greatest sense of loss where our fight against hate continues. It is about rebuilding these communities, equipping their young people with the skills that will enable them to compete more effectively in the modern global world and – fundamentally – giving them a sense of hope in the future.

To fight fascism, we understand the need to take the economic link seriously. We can run all the community events in the world to bring people together, we can try to rationalise the immigration debate with facts, we can fight the media and online platforms to pull hateful content. But none of this will be enough unless we can also offer real hope.

Fear, HOPE and loss sets the stage for us to move forward. In the coming months and years, we will focus on addressing the drivers of hate, and to ensure everyone can hope; from our research and data work, through to how we engage with communities on the ground.