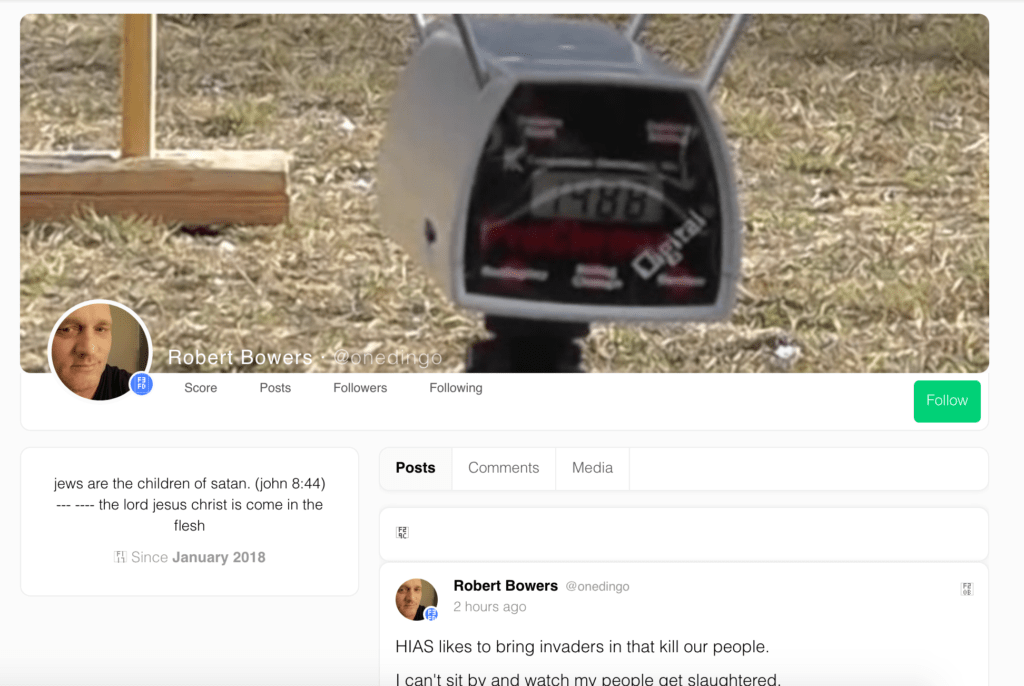 At least four people were left dead after a gunman entered the Tree of Life Congregation Synagogue in Pittsburgh, Pennsylvania on Saturday morning, local time. Reports stated that man entered the synagogue shouting “All Jews must die”.

The alleged shooter was later named Robert Bowers, a man that has expressed hatred against Jews on the alt-right associated social network Gab and engaged with conspiratorial antisemitic groups on the platform for months.

Bowers profile on Gab was swiftly removed after his name was published but archived content shows that his profile banners over the last months have included the number “1488”, a white supremacist term, and another of a close up of a shooting range target. His profile description previously read: “they are not undocumented or even illegals. they are invaders”, until it was recently changed to “jews are the children of satan. (john 8.44) ——- the lord jesus christ is come in the flesh”.

Bowers’ profile gives chilling insights into the mind of a white supremacist murderer. On 21 June 2018 he posted wrote on Gab:

Make me fast and accurate. Let my aim be true and my hand faster than those who would seek to destroy me. Grant me victory over my foes and those that wish to do harm to me and mine. Let not my last thought be “If only I had my gun” and Lord if today is truly the day that You call me home, let me die in a pile of brass.

His Gab profile also reveals something of his radicalisation path. In a post from 7 February 2018 he stated that “Watching months of Colin Flaherty vids was eye opening.”, referring to the far-right author and writer of the 2012 book White Girl Bleed a Lot: The Return of Racial Violence to America and How the Media Ignore It and Don’t Make the Black Kids Angry which argues that discrimination of black people is a “hoax”. Flaherty has connections with the alt-right and has been interviewed by the white supremacist and antisemitic YouTuber Tara McCarthy.

On the platform Bower has retweeted content from a nazi group called “GABstapo” which describes itself as “[…] aware of the deadly threat jews pose to our very existence”. Members of the group are now endorsing the attack. Many of Bowers’ posts reveal a conspiratorial antisemitic outlook associated with the alt-right. In one post he expresses disappointment in what is likely the conspiratorial Qanon movement, for not having “gotten rid of old man soros yet”, meaning George Soros, a common target of far-right antisemitism, and recently a victim of an attempted bombing. As recently as two days ago Bowers resposted a supportive message of the Rise Above Movement, a violent white supremacist fightclub who’s leader was recently arrested in Los Angeles for violence towards anti-racist counter-protesters at, among other event, the Unite the Right rally in Charlottesville in August 2017. He engaged with several self-professed alt-right accounts and engaged with the group that campaigned against Black Panther, the movie whose ratings alt-right activists attempted to tarnish earlier this year.