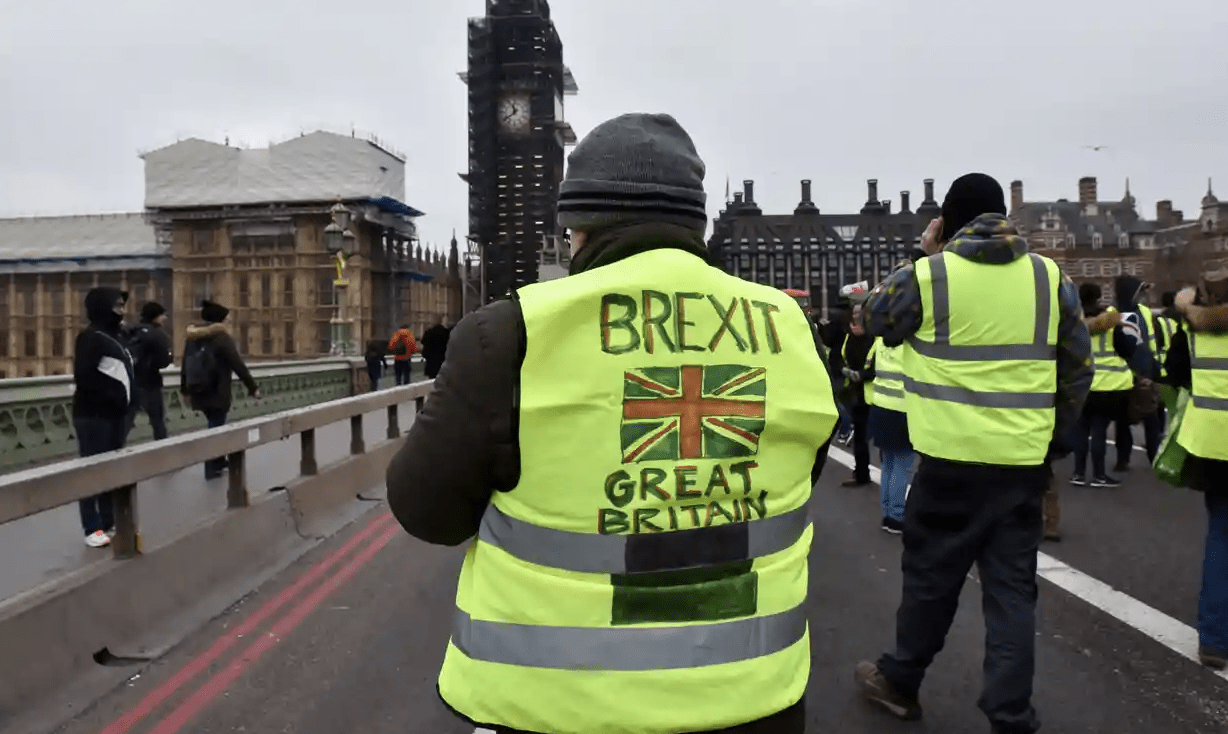 The appalling abuse faced by Anna Soubry MP, Sky News presenter Kay Burley and campaigning journalist Owen Jones is simply the latest set of incidents in a growing list of far-right actions across the UK, and part of an attempt to hijack Brexit to spread hate and division. It’s important to know that these are being orchestrated by a tiny, but organised, minority who don’t represent most Leave voters.

HOPE not hate can reveal that this new wave of far-right activity is being coordinated by ‘the Liberty Defenders’, a group led by former mercenary Timothy Scott and his associate ex-UKIP member Jack Sen.

They are being supported by James Goddard, a far-right activist, who has been involved in several of the high profile protests and incidents outside Parliament. Goddard has posted numerous anti-Muslim messages on the social media site Gab, including messages stating: “Wherever Islam exists you will find murder and rape”, while another calls for mass deportations of “illegals”.

The efforts of the Liberty Defenders are being supported by former British National Party (BNP) leader Nick Griffin, who is publicly encouraging further protests against the Government in the hope that these can help resurrect his failed political career.


The involvement of Timothy Scott should spark particular concern. A former soldier, Scott joined the Kurds in their fight against ISIS. Clearly unstable, after Scott returned to England he became the frontman for the UK branch of anti-Muslim movement Pegida. His stint lasted only a couple of days before a car crash interview with Channel 4 News led to him resigning. Cut adrift, he openly threatened to kill a far right rival.

More recently, HOPE not hate can reveal that Scott has been stalking the safehouse of Islamic hate preacher Anjem Choudary, who was released from prison in October 2018.


The Liberty Defenders are not the only far-right activists trying to use Brexit and the ‘yellow vests’ movement for their own ends. In the North East, a motley band of far-right activists have been holding protests outside the offices of Remain-supporting Labour MPs. Among those attending were supporters of the far-right groups the North East Infidels, the English Defence League (EDL), Britain First and UKIP.


In Manchester just last weekend, ‘yellow vest’ protesters threatened an RMT picket line at Manchester Victoria station. An Asian union member was abused and called “a paedophile”. Some of those involved in the abuse were wearing EDL insignia on their yellow vests.

Based on messages shared in private social media groups and seen by HOPE not hate, protests are expected this weekend in Cardiff, Birmingham, Manchester and Leeds. The far right is considering targeting the offices of Remain-voting Labour MPs.

These protests will be joined by nazis from the Pie and Mash street gang, led by former football hooligan Joe Turner, who now goes by the name of Jeff Marsh. Writing on Facebook yesterday, convicted nazi thug Luke Pippen said: “Let’s get together and protect the yellow vests they are predominantly women and the elderly and no one is protecting them from the bully OB ….lets do what we do best and protect them.” Doing what they do best is drinking, racially abusing and fighting.

A ‘Liberty Defenders’ demonstration in Dover later this month is also likely to attract considerable numbers of far-right activists; Dover was the scene of a fascist riot in early 2016 which led to 65 people receiving a total of 85 years imprisonment.

With the Brexit clock running down, the risk of disorder and violence from the far right movement is growing. While everyone should be allowed to protest peacefully, it is time for the authorities to clamp down on the bullying and threatening tactics of these far right activists before someone is seriously injured.

Nick Lowles is CEO of HOPE not hate