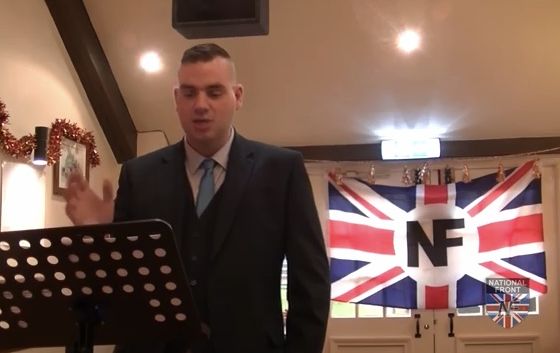 Already 2019 has not been kind to the National Front (NF) – unbelievably the world’s longest-running fascist party.

Even by their very low standards, 2018 was dreadful.  If veteran Nazi Richard Edmonds’ taping his coat up was not a humiliation too far, then surely the activities of Dumb and Dumber who took over the leadership mid-year, was  as low as the NF has ever stooped. If they were not threatening the aged with violence, they were, instead, bedding them.

Unsurprisingly, Mr Larry ‘moneybags’ Nunn abandoned plans to take over the party.  What with his old mates in National Action currently getting banged in gaol, he simply does not have the desired foot soldiers for such a dirty task. This was evident enough when his motley crew of “aged backstabbers” abandoned the NF’s annual Remembrance Sunday parade last November.

Actually, “backstabbers” is one of the more polite descriptions of Nunn and the remnants’ of the London Forum used by the NF’s cerebrally challenged Deputy Chairman Jordan Pont to describe them.

Nunn was behind the 1279th far-right “unity” meeting held in Leeds last week. Its purpose was “the question of whether some of the separate parties and organisations within the wider nationalist community could somehow begin working more closely together.”

The answer was self-explanatory.

Neither the NF nor the British National Party (BNP) were invited to partake in the meeting, so it was the same 39 individuals as it ever is at these events, refusing to work together.

These non-party types get together in a secret location, have a few sausage rolls and pints of Proletarian lager and then discover/remember how much they hate each other; get pissed, make threats, blame the Jews and go home.

The desire to get a new neo-Nazi party up and running is mainly down to the NF’s utter incompetence and stupidity and the BNP’s preoccupation with funding itself by necrophilia.

Not being invited to a piss-up on Nunn’s credit card appears to have really riled the NF.

The party’s Kevin Layzell – a longstanding joke even in his own bedroom – was outraged by the slight. Kevin reached for his finest Crayola to ask the most important question of the meeting’s intentions:

“May I ask the members of this Unity group what they have against the National Front? People have a lot of talk of unity and ideas of creating new parties without dedicating time to pre-existing parties within the movement? Not to sound insulting to people at the unity events but its normally people who have formed new parties/groups within the movement and they fall through that then look to others to launch new ideas without turning any attention to what has stood the test of time? I am a proud National Front member and activist and I ask others to dedicate their time to it.”

Master Layzell need not have worried about sounding insulting. Nasal, monotone, drab, incoherent, incontinent and silly, yes. But not insulting.

The reason Master Layzell was not invited I can confirm, was due to his loose lips about a certain fascist defecating into a Tesco carrier bag whilst out leafleting. That is a cardinal sin; everyone knows Tesco is the centre of the Zionist conspiracy.

No, this “unity” meeting did not need the NF and Kevin Layzell’s input. Nor did it need the oafish idiocy of the NF’s Jordan Pont, but he did attend and sat in the corner with his arms folded looking very angry and put out.

Upon returning to his bunker in Sheffield, Pont gave the organisers’ a piece of his not considerable thoughts.

Commenting on a particularly  vacuous thread on social media, apropos more about his lonely nights with a thrice soiled copy of Back Door Brides, that there were not “many ladies in nationalism as it is.”

Nunn then poured some excellent fuel on the fire by suggesting the NF works with he and his crew as soon as it (the NF) realises it has continually failed “to provide a path to salvation for our people.” He then went on and on about “queering the pitch” and being premature.

Pont, (the boy really is special) was having none of Nunn’s long-winded jibber jabber.

He retorted that he and Tony Martin (described by an NF member to one Irish newspaper as a “granny sha*g*er”) were in fact busy “modernising” the NF.

Poor Pont obviously has no concept of the concept of modernisation. Unless he thinks the 1930’s was a particularly modern time. To prove how modern Pont’s tastes are, his recent haircut in the model of the popular character Travis Bickle should give you a clue.

Would you be surprised if I told you the NF recently tried sounding out the BNP over the prospect of a merger? I guess with the NF so close to a final death, the BNP will be positively erect at the very suggestion.