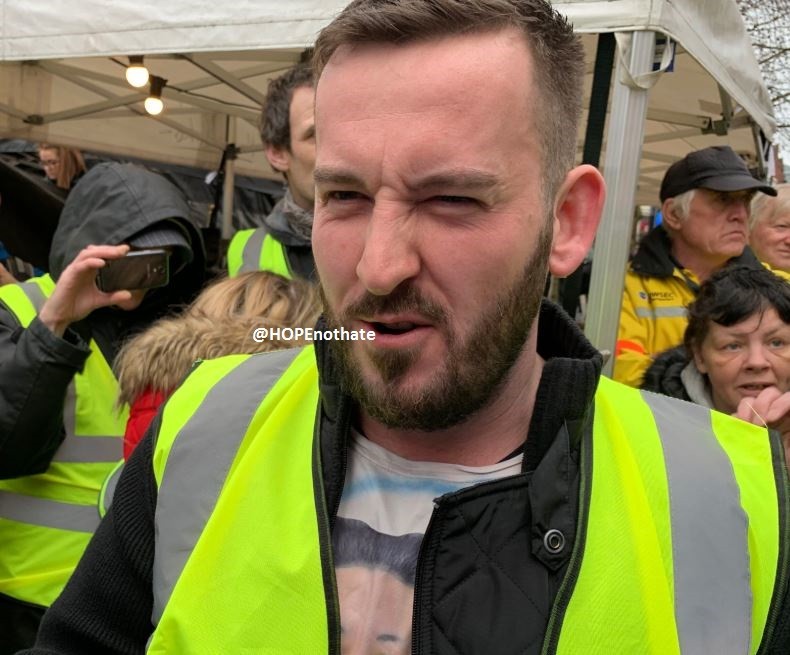 A mistrust in political representatives adds potency to a mix of unmet expectations, broken promises, and possible further decline and anger. The result is an increase in the number of British people conceptualising the current problems they face as being the result of a corrupt and detached elite oppressing the (often undefined) ‘people’.

While the far right has not necessarily created this narrative they have been beneficiaries of it.

Biggest since the ‘30s

The last year has seen a number of far-right demonstrations in London that have attracted, in some cases, 10,000 people. Whether it was the ‘Free Tommy Robinson’ event in July or the ‘Brexit Betrayal’ demonstration in December, the far right descended on the capital in numbers not seen in decades, perhaps not since the interwar period of the 1930s. Last year’s unprecedented demonstrations came off the back of the huge Football Lads Alliance demonstrations at the end of 2017.

The primary focus of this string of demonstrations has ranged from the imprisonment of anti-Muslim activist Stephen Yaxley-Lennon (AKA Tommy Robinson), the supposed suppression of free speech (especially in regards to speaking about Muslims), and the perceived betrayal of the Brexit vote by politicians and elites. Similarly, 2019 has kicked off with a number of small, insignificant ‘Yellow vest’ demonstrations, notable primarily for their wildly disproportionate press coverage, also focusing on the Brexit issue.

Despite the divergent range of issues, the demonstrations have, on the whole, been attended by the same group of people. Our analysis of the events found activists from across the far right, ranging from former English Defence League (EDL) and Britain First activists, supporters of Generation Identity, old BNP and NF stalwarts, UKIP and For Britain activists and alt-right and alt-light figureheads, happy to march shoulder to shoulder whatever the cause; something approaching a far-right popular front.

The bulk of the demonstrators, however, seemed to hold little or even no affinity with the formal far- right organisations represented on the day. This is significantly different from the EDL days when most attendees were, at the very least, loosely affiliated with the organisation or even their local branch, and often attracted by the community aspect and sense of group identity as much as the issue being demonstrated.

This begs the question why 2018 saw demonstrations, on a range of different issues, attended by roughly the same group of non-aligned protesters; what were the common mobilising factors?

Despite the eagerness of some to describe these demonstrations as ‘fascist’, they fit much more comfortably within Cas Mudde’s definition of populism: “an ideology that considers society to be separated into two homogeneous and antagonistic groups, “the pure people” versus “the corrupt elite”, and which argues that politics should be an expression of the volonté générale (general will) of the people.”

This current movement’s binary distinction between the “pure people” and the “corrupt elite” is why the accusation of “traitors” is so readily thrown at any authority figure they disagree with, be that politicians who back remaining in the EU or judges who sentence Stephen Yaxley-Lennon to prison. Those who disagree with their take on any issue are understood to be disagreeing with the general will.

This movement’s populist outlook is likely one of the reasons that the demonstrations were so large last year. While traditional far-right demonstrations or even English Defence League events tapped into the politics of only a small section of society, the overarching narrative of last year’s demonstrations – the betrayal of “the people” – resonates with much larger sections of society.

Though there are of course fascists amongst the crowds, especially those associated with groups such as the BNP or Generation Identity, the demonstrations themselves are generally not fascist, by which I mean the majority of the organisers and participants cannot accurately be described as fascists. On the whole, this angry mass of protestors lack a structured ideology and are driven much more by visceral emotions such as anger and betrayal.

This is not to say that what starts as an emotional mobilisation can’t and won’t be increasingly politicised towards fascism. We saw this with the EDL, with large numbers starting as single-issue activists then expanding their ideological outlook to a much more traditionally fascist platform with time. Perhaps, as author and politician Vernon Bartlett wrote of fascism before WWII, it “starts by being an emotion; it only develops a plan and a philosophy after the emotional crisis has passed its height”.

Leaderless but not directionless The fact that these demonstrators self-identify as ‘the people’ and have great antipathy towards elites could explain their reticence to have formal structures which necessitate hierarchies. Generally speaking, this is a movement with organisers, spokespeople and martyrs rather than traditional leaders. While Stephen Yaxley- Lennon is an important figurehead for this movement, he has not sought to launch a formal vehicle, or adopted a formalised leadership position within it, unlike he did with the EDL and Pegida UK in the past.

Similarly, in the wake of the Yellow Vests harassment of Anna Soubry MP and Owen Jones outside parliament in January this year, the press christened James Goddard as their leader to which he responded: “The #YellowVestsUK has no leader or political affiliation. They can’t silence us all!” When the press then identified Tracy Blackwell as the new leader, Goddard tweeted”

“Seriously how many times do we have to explain that the yellow vests have No Leader, No Egos and No money !! It’s normal people who are frustrated with the system […].”

The lack of formal leaders, however, does not mean they are directionless, merely that the rank and file look to a range of far-right social media ‘influencers’ and the ‘alternative media’ for direction rather than a formal leadership team. Lennon is obviously primus inter pares but other influencers include Daniel Thomas (AKA Danny Tommo), Raheem Kassam, Liam Tuffs, Carl Benjamin (AKA Sargon of Akkad), and Markus Meechan (AKA Count Dankula), amongst a whole host of others. Together, their social media output provides a veritable pick ‘n’ mix of grievances for demonstrators to choose from, each mutually reinforcing the overarching sense that the system is rigged against them.

While the anti-Muslim party The For Britain Movement has been well represented at all the demonstrations last year, it has been UKIP that has been most successful in courting these demonstrators. Party leader Gerard Batten has spoken at numerous Lennon focused demonstrations last year, and led the ‘Brexit Betrayal’ event in December, consciously setting out to gather this leaderless mass into one place and exploit its electoral potential. To do so he has shifted the party in an increasingly far-right direction.

Whether he manages to convince these people that UKIP is a legitimate vehicle to affect the vast societal change they demand remains to be seen, though May’s local elections will give a clear indication.

The final element at play here is the international outlook of this movement. For a movement made
up of nationalists, they are quick to reach out internationally. They conceptualise the threat in regards to Islam as occident-wide and their own oppression at the hands of a corrupt British elite as comparable to the oppression of ‘the people’ in America or in other European and Western countries; in some cases, such as with respect to the EU, they believe they are ‘oppressed’ by the exact same elite.

Organised to coincide with President Trump’s UK visit in July, the ‘Free Tommy Robinson’ demonstration in London, for example, saw far and radical right populists descend on London from across Europe, North America and Australia, all articulating their support for Lennon as part of a wider international struggle.

Simultaneously, all events saw vocal support for Donald Trump, no stranger to framing politics as the people vs. the elite. Similarly, the Yellow Vests UK is literally a copy of the French Mouvement des gilets jaunes, seeking to capitalise on their success across the Channel.

How long this movement can continue as a shapeless and leaderless mass of angry people is difficult to say. It is of course possible that it could solidify into a more formalised movement under the leadership of Stephen Yaxley-Lennon, or within UKIP under Batten. However, this would not sit well with the numerous existing far-right groups that were well represented at the demonstrations last year who, while happy to be part of a far-right popular front demonstrating a particular range of issues, would not countenance being subsumed into a formal umbrella organisation.

The danger is that the overarching mobilising driver of this movement – the populist dichotomy of the ‘people’ vs. the ‘elite’ – is very popular.

With trust in politicians and our political system reaching staggering lows there is a ready pool of people that could be attracted to this type of messaging. Whatever happens with Brexit there is bound to be a narrative of betrayal being advanced by the far right that will no doubt speak to large numbers of people in the UK and reinforce existing disillusionment.

One thing is certain. We cannot wait for a traditional, united, far-right umbrella organisation to emerge before we act. We need to start connecting the dots now and to realise that what we’ve seen over the last year is various incarnations of the same threat. Once we conceptualise it as such we can properly begin
to find ways to deal with the underlying problems driving this phenomenon. The hate might be the same as before, as are their targets, but the nature of the far right is changing and we need to understand that. Shouting ‘Nazi’ and ‘fascist’ won’t be enough.