EXPOSED: For Britain and the “White Genocide” Conspiracy Theory 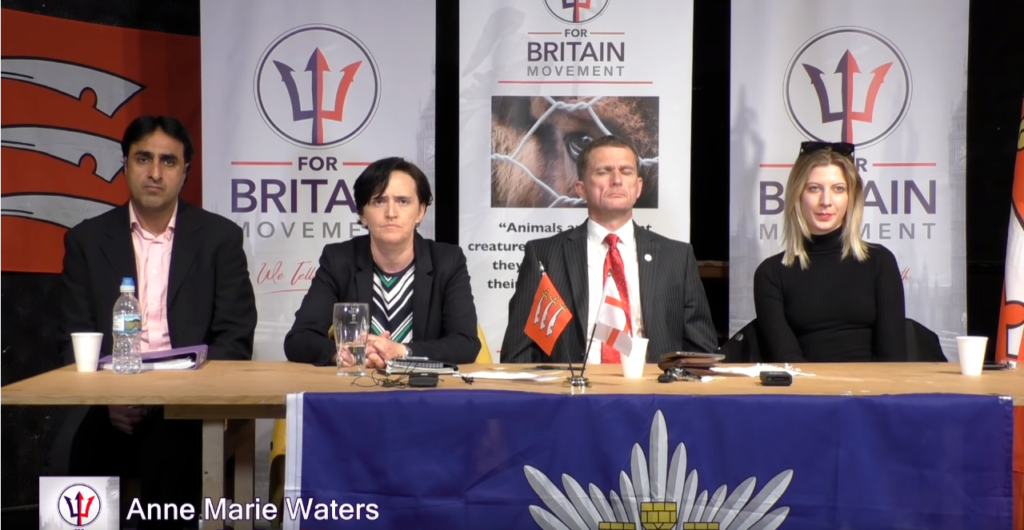 Anne Marie Waters, head of the anti-Muslim For Britain Movement, continues to insist that her party is not “far right”, despite the fact that we have revealed numerous instances of extreme racism within the party, which has become a magnet for insalubrious elements currently banned from joining UKIP. This includes numerous former members of the British National Party (BNP).

Several former BNP councillors are currently representing For Britain in the local elections, as the party hopes to capitalise onUKIP’s decline, standing a total of 42 candidates across the UK. Whilst this is hardly a huge number, it is notable that the party has matched or exceeded UKIP in terms of number of candidates in eight councils. This is also concerning given the extreme, racist and antisemitic “white genocide” conspiracy theory that is being promoted by sections of the party membership.

The so-called “Kalergi plan” is an increasingly popular strain of the white genocide conspiracy theory, which alleges that there is a deliberate plan to undermine European white society by a campaign of mass immigration, integration and miscegenation conducted by sinister (and often Jewish) elites.

Richard von Coudenhove-Kalergi was an Austrian-Japanese politician, whose work is considered by some as pioneering European integration and laying the ideological groundwork for the European Union. As Right Wing Watch have stated, racist and antisemitic conspiracy theories have since developed that allege that Coudenhove-Kalergi devised a long-term scheme to undermine the white race by encouraging immigration into Europe, creating a populous devoid of identity who would supposedly be easily ruled by Jewish overlords.

The conspiracy theorist Mick Greenhough addressed For Britain’s conference in September (which also featured Ingrid Carlqvist, a Swedish anti-Muslim figure who has engaged in Holocaust denial). According to the party’s website, Greenhough’s conspiratorial speech was “a thought-provoking talk on the roots of the EU”. His book, Brave New Europe?, on sale at the conference, makes multiple references to the Kalergi plan, stating that:

In 1922 a rather shadowy character, Richard Coudenhove-Kalergi, founded the “Pan-European” movement in Vienna, which aimed to create a New World Order in Europe by deliberately mixing and cross breeding all the tribes of the individual nations with migrants from Africa and Asia to form a homogenous population.

There are numerous posts by party members on For Britain’s social media discussing this supposed “Kalergi plan”. Darryl Magher, For Britain’s candidate in the Wednesbury North ward of Sandwell and the party’s national Fundraising Officer, has posted on social media about “The genocidal Kalergi plan to destroy the indigenous nations and peoples of Europe”. Magher was found guilty of criminal damage in 2014 after being caught on CCTV vandalising the car of the chairman of a community centre in Sandwell during an ongoing feud, and was sentenced to a four-month night time curfew.

Steve Latham, For Britain’s candidate in the Newton ward of Sandwell, was previously exposed by the Birmingham Post to have made a long post alleging that Kalergi’s plan is intended to bring about “Europe’s fusion with the Third World” through interracial marriage. The post also claims that  “European integration amounts to genocide” and suggests that Kalergi’s “degenerate elitism” and “internal conflicts and frustrations” was in part due to the influence of the Austrian actor Ida Roland, identified as a “Jewess”.

Lawrence Searle, the head of For Britain’s Epping Forest branch, which has a large ex-BNP contingent, has promoted a now-deleted video on the Kalergi plan by white nationalist YouTuber Black Pigeon Speaks, which claimed that there are plans afoot for a “deliberate ethnocide” via “enforced mass migration to create an undifferentiated, homogenous mass of serfs to be dominated by a wealthy self-electing elite”.

Richard Taylor, Secretary of the party’s Somerset branch, has also claimed that the “Coudenhove-Kalergi plan” formed a template for the “destabilisation” of Europe at the hands an “Elite” which aims to reduce “the planet’s population from its current level of between 6.5-7.0 billion to a ‘manageable’ 2.0-2.5 billion”. He elsewhere has encouraged party members to “read up” on the Coudenhove-Kalergi “master plan”.

Meanwhile Ian Baxter, Chairman of the Swindon branch, wrote “I read Kalergi years ago. We must act today or regret tomorrow…” under a post by a For Britain member which read “WHY IS NOBODY TALKING ABOUT THE KALERGI PLAN TO RACIALLY AND CULTURALLY DESTROY THE EUROPEAN PEOPLE? THE REAL AGENDA BEHIND THE EU”.

The prevalence of the Kalergi plan conspiracy theory within Waters’ party signifies For Britain’s continuing shift into ever-more extreme territory.

This was also evident when Lucy Brown, former aide to Stephen Yaxley-Lennon (AKA Tommy Robinson) displayed her nazi symbol necklace (for which she has recently been criticised on BBC Radio 4) at the group’s campaign launch in Epping Forest, stating “I will continue to wear this because nothing I wear tells anybody what the thoughts are in my head” (Brown claimed in the same speech that she acquired the Sonnenrad necklace because she thought it was “pretty”).

For Britain do not stand a viable electoral threat at the local elections, but party activists are motivated by extreme and irrational ideologies, and will attempt to stir up local divisions and inflame local tensions wherever they can.

Read more of our content about For Britain here: