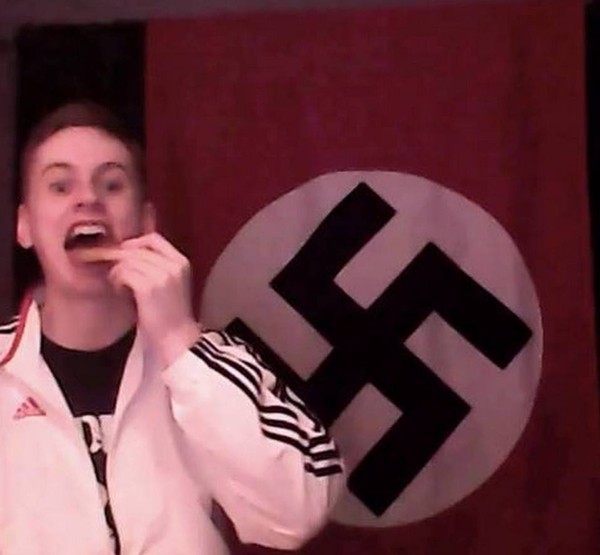 Yesterday I wrote about the hacking of the Iron March forum. The leak is already producing some very fine analysis, but none more so than about the role certain British individuals played in the recruitment and encouragement of terrorism.

As I wrote, Iron March was key to the formation of the American terrorist group Atomwaffen Division (AWD) and the expansion of our own National Action (NA).

We have always suspected that would-be racist murderer Zack Davies was active on the forum and that he had been heavily influenced by members of NA.

This proved difficult to prove and after Davies tried to murder a man in a supermarket in Wales, NA bragged privately they had managed to distort so much of the information available about Davies’s Nazism and activism that they themselves would be in the clear when it came to determining what triggered Davies to do what he did.

Davies, like the paedophile Jack Renshaw, was a ‘White Jihadi’ mimicking the determination and discipline of their warped heroes in Islamic State (ISIS).

One person who evaded investigation and scrutiny in the Zack Davies affair was Christopher Lythgoe from Warrington. Lythgoe was an unknown at the time of the attack, although behind the scenes he was plotting, recruiting and building for a race war.

Lythgoe would later be accused of granting permission to Renshaw to carry out the murder of Labour MP Rosie Cooper during a meeting in a Warrington pub.

Either late in 2015 or early in 2016, Lythgoe took over the leadership of NA. So frighteningly dedicated was Lythgoe to murder and terrorism one exceptional individual – Robbie Mullen – came to HOPE not hate to help thwart Lythgoe’s plans.

Both Mullen and HOPE not hate believed this was in reference to the case of Zack Davies who may have failed to follow NA instruction and had inexplicably simply attacked a random dentist in a supermarket.

When he was sentenced in 2018 to eight years in prison for leading National Action, the judge in the case described Lythgoe as having a “dystopian vision”.

Lythgoe was obsessed with race war and violence. He had even taken his followers in National Action to marvel at the “brilliance” of the aftermath of the Manchester Arena bomb attack in May 2017.

While, as yet, there is little exciting from the leaked Iron March list about British Nazis coming to light, it is now clear that Lythgoe was in touch with Davies and even planned to meet with him. In September 2014 Lythgoe sent a message to Davies about arranging to meet in Mold.

As was standard in NA (and apparently not so much with American Nazis) the conversation trail ends after the request for a meeting. This is no doubt due to the notorious paranoia and secrecy that dominated Lythgoe. In line with the protocols Lythgoe instigated in NA, all “business” was to be conducted on their own platforms.

What we do subsequently know is that four months after contact between the two, Zack Davies went into a supermarket in Mold and tried to behead an Asian man.

Lythgoe considered himself a tutor and imagined himself as a medieval king leading an army. Given Lythgoe’s obsession with terrorism and murder and his plans for the race war he so desired, perhaps the police should look further into not just Lythgoe’s relationship with Zack Davies but whether he encouraged Davies to commit murder in the name of ‘White Jihad’, the philosophy Davies was so committed to.

Like the man said, allegedly, “don’t fuck it up.”

You can read more about National Action’s terror plot in the book Nazi Terrorist.