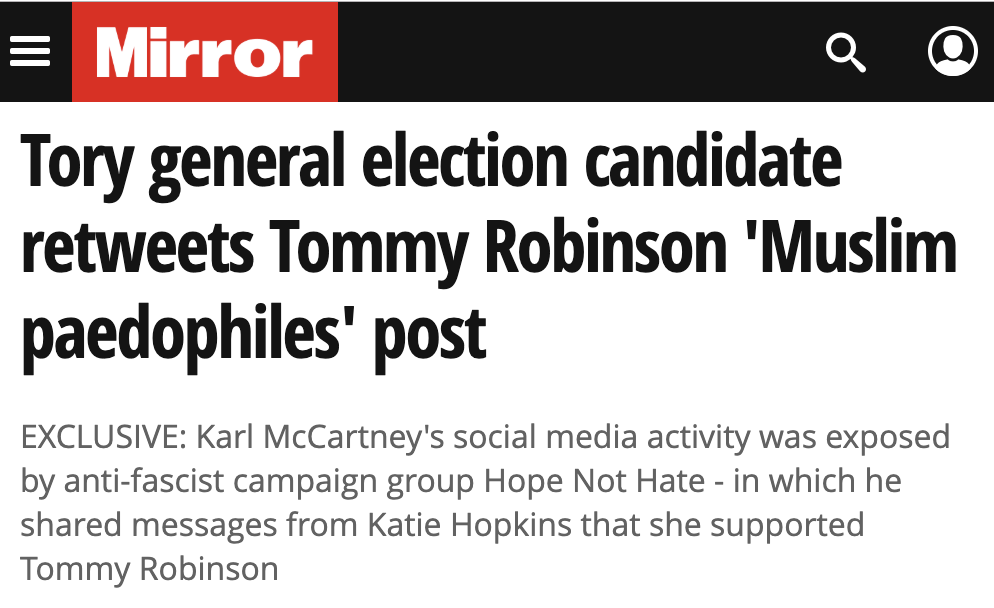 The Tory candidate for Lincoln should be suspended, writes Nick Lowles, after HOPE not hate reveals he repeatedly promoted views of far right activists

There’s a bombshell piece in the Sunday Mirror today – thanks to HOPE not hate’s research team, the paper covers the fact that Conservative candidate for Lincoln Karl McCartney promoted the vile views of far right thug Tommy Robinson.

That in itself is bad enough and should lead to McCartney’s suspension, but our researchers discovered that there’s a lot more to this story. Over, and over, and over, McCartney retweeted posts from far right activists like Katie Hopkins and Paul Joseph Watson, and shared articles which promoted Tommy Robison’s views.

As the Mirror reports, McCartney shared a tweet from ‘Tommy Robinson’ (real name, Stephen Lennon), and also shared multiple tweets promoting Lennon’s views, defending actions which led to him being jailed and condemning people protesting against a pro-Tommy rally.

Stephen Lennon is a far right thug, with multiple criminal convictions, and as anyone who has any role in mainstream politics should, Lennon is a danger to communities across the country.

That didn’t stop McCartney from sharing a so-called letter from prison in which Lennon claimed his murder inside would spark a revolution.

“I’ve always said I’d sacrifice my life tomorrow if it would end the Islamic takeover of our beautiful land.”

Over the course of a few months, McCartney shared tweets from Hopkins five times, including this one in May 2018 defending ‘Tommy Robinson’:

Tommy warned us about these rape gangs. You laughed and called him a racist Tommy will die in prison at the hands of these gangs. You will laugh and say it served him right Then you will remember YOU have a daughter #TommyRobinson

Paddling in the far right cesspool

McCartney also shared an antisemitic trope from conspiracy website editor Paul Joseph Watson who spread the lie that George Soros was paying protesters to demonstrate at Congressional hearings in DC.

Just over a year ago, on 13 November 2018, McCartney retweeted this Katie Hopkins’ now-deleted bizarre and offensive tweet:

1) undermine the family unit & societal norms. Say men are now women 2) change the fabric of a country with migrants, remove sense of place or belonging 3) screw with democracy – overturn elections / find votes 4) Ponder why people are angry and utterly disenfranchised

Karl McCartney’s apology of sorts can’t be the end of the matter. This wasn’t a one-off accident, but many retweets of far-right content over a sustained period. He has failed to explain why he would have promoted these views in the first place.

There’s no excuse for promoting far right propaganda. Spreading the hateful views of a thug like ‘Tommy Robinson’ or the vile views of Katie Hopkins demonstrates that Karl McCartney is utterly unfit to be an MP.

If the Conservative Party is serious about tackling Islamophobia and prejudice within its ranks; it must immediately suspend him as a candidate.