The Holocaust, revisionism and antisemitism in Hungary. 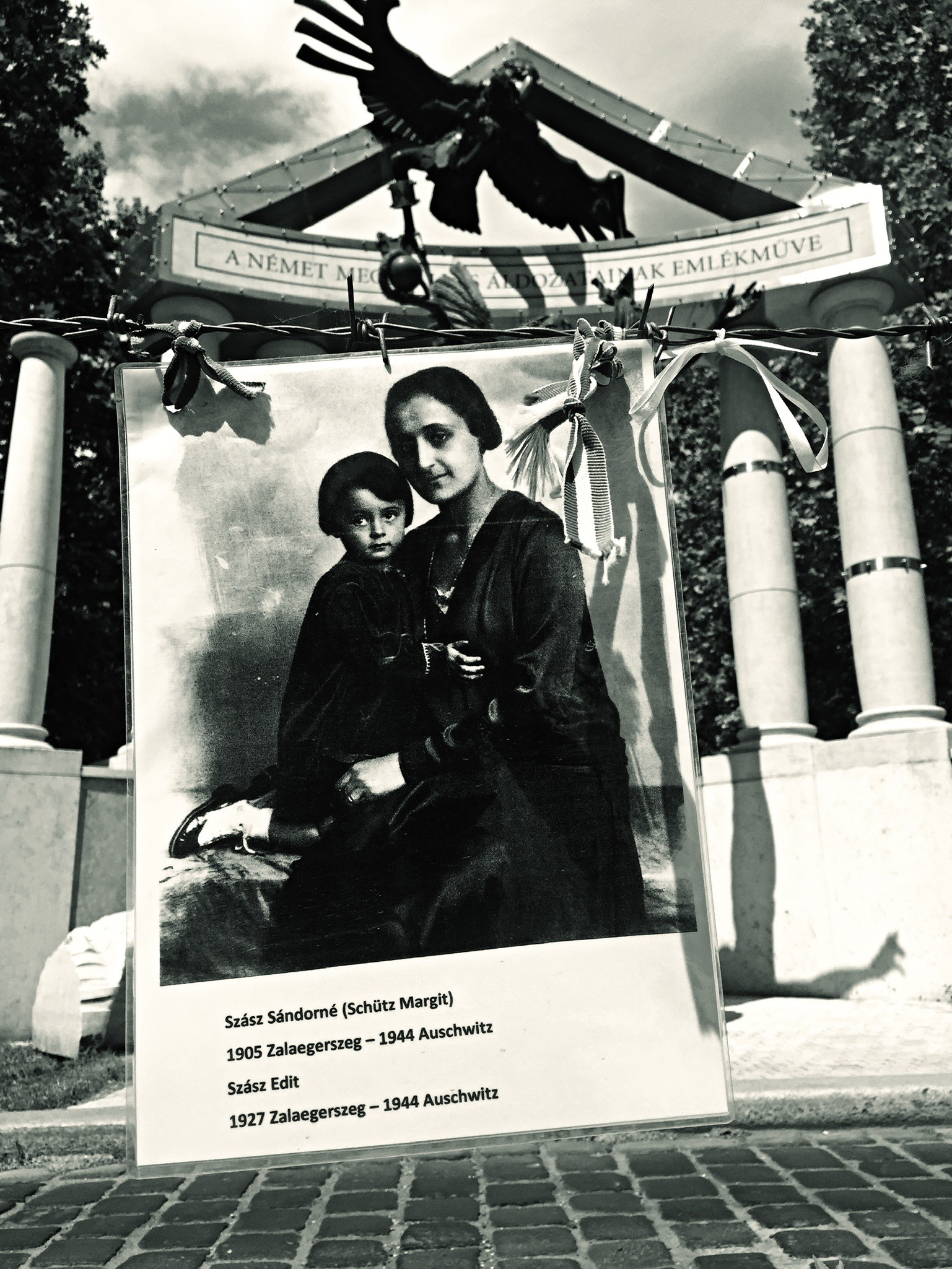 In 1941, around 825,000 Jews lived in Hungary, including the newly acquired territories; by the end of the war, there were only 260,000 survivors. Seventy-five years on, Viktor Orbán regularly declares “zero tolerance for antisemitism”; yet the Holocaust Remembrance Project gave Hungary a ‘red card’ for revisionism, rehabilitation of war criminals, and minimizing official complicity in the genocide. In a country where a significant percentage of the population is overtly antisemitic, this nativist-authoritarian government has no qualms about pushing the boundaries of what is acceptable; no qualms about failing to censure antisemitism from within its own ranks; and no qualms about engaging in brazen historical revisionism.

On the Danube riverbank, close by the Hungarian Parliament, set into the concrete is sixty pairs of rusting shoes; at three separate places, cast-iron signs read in Hungarian, English and Hebrew: “To the memory of victims shot into the Danube by Arrow Cross militiamen in 1944-45.” Created by the sculptor Gyula Pauer and film director Can Togay, the memorial was installed on the Pest embankment in 2005. Modelled on actual pairs of men, women and children’s shoes from the 1940s, the memorial bears silent testament to the frenzied butchery of the fascist Arrow Cross units who herded their terrified Jewish victims to the banks of the Danube and forced them to take off their shoes before shooting them directly into the frozen waters of “the Jewish cemetery”. Shoes had become valuable wartime commodities for murderers to trade on the black market.

“I heard a series of popping sounds. Thinking the Russians had arrived, I slunk to the window. But what I saw was worse than anything I had ever seen before, worse than the most frightening accounts I had ever witnessed. Two Arrow Cross men were standing on the embankment of the river, aiming at and shooting a group of men, women and children into the Danube – one after the other, on their coats the Yellow Star.”

When the fascist Ferenc Szálasi seized power in October 1944, his Arrow Cross (Nyilas) units launched an atrociously cruel campaign of terror, killing thousands of Budapest’s Jews. Although Hungarian Jews had been subject to harsh legal and economic sanctions since 1938, they survived the first four and a half years of World War II relatively intact. However, following the German occupation on 19 March 1944, Hungarian Jewry was subjected to the most ruthless and concentrated liquidation drive of the war that claimed more than 400,000 lives.

Budapest’s Jews, murdered in their homes, in the streets or by the riverside; done to death on forced marches or deported to be annihilated in Auschwitz, all faced what Primo Levi described as “a defenseless and naked death, ignominious and vile”. The fascist perpetrators demonstrated for all centuries to come what “unsuspected reserves of viciousness and madness lie latent in man even after millennia of civilized life”. Levi wrote that it is not permissible to forget; but today, the politics of remembering have become very fraught in the authoritarian Christian-national state of Hungary.

The politics of remembrance

Hungary’s foreign minister, Peter Szijjarto has always been quick to repudiate any accusations of antisemitism levelled at the regime as “unworthy and unacceptable”, regularly advances the claim that Hungary has done the most in Europe against antisemitism, and repeats the Orbán line, “We have declared zero tolerance for antisemitism.” So why does nobody (apart from Benjamin Netanyahu) fully swallow that line?

While it might be inaccurate to claim that Fidesz has an official state-sponsored policy of antisemitism; it certainly is the case that Fidesz indulges in outrageous historical revisionism; fails to censure crude antisemitism from high within its own ranks; and actively works with its hireling ideologues to rehabilitate war criminals and fascists.

The Holocaust Remembrance Project which was published on January 25, 2019 to coincide with UN Holocaust Remembrance Day, accused the Hungarian government of minimising its country’s complicity in the deportations and genocide. Fidesz stands accused of rehabilitating war criminals as anti-communist icons; inflating Hungary’s role in “saving” the Jews of Budapest; and introducing antisemitic writers into the national curriculum.

In June 2017, Orbán made a barefaced bid to rehabilitate the wartime dictator, when he stated that it was thanks to statesmen like Miklós Horthy that Hungary was not “buried under history in the trying times” of the second and third decades of the Twentieth Century. This was the statesman who, according to Paul Shapiro of the U.S. Holocaust Memorial Museum, wrote with pride to his Prime Minister in 1940, “I have been an anti-Semite my whole life”, and to Adolf Hitler in May 1943, “The measures that I have imposed have, in practice, deprived the Jews of any opportunity to practice their damaging influence on public life.”

This shift by Orbán over to the political terrain of the far-right prompted World Jewish Congress President Lauder to write in protest to the Prime Minister: “The terror that Admiral Horthy, an unabashed anti-Semite, inflicted on the Jewish community of Hungary…and his role in the deportation and murder of hundreds of thousands of Jews, must never be forgotten and can never be excused.”

The most blatant act of historical revisionism was the 2014 construction of the memorial in Szabadság Tér (Freedom Square) – a piece of nationalist kitsch which features an eagle (Germany) swooping down on the archangel Gabriel (Hungary) – a stone’s throw from the statue of Horthy commissioned by the neo-fascist Jobbik party a year earlier. The memorial is dedicated to “all the victims of the 19 March 1944 German invasion of Hungary”. A group of Holocaust survivors and Jewish activists assembled a counter living memorial of stones, shoes, photographs and personal mementos at the site, to protest against this whitewashing of history.

On 26 January 2014, in an open letter, the late historian Randolph L Braham returned a high state award to Hungary, in protest at the “brazen attempt to falsify history” and exonerate the country from its role in the Holocaust:

“As a survivor whose parents and many family members were among the hundreds of thousands of murdered Jews, cannot remain silent, especially since it was my destiny to work on the preservation of the historical record of the Holocaust.”

For Braham, “the straw that broke the camel’s back” was the plan to erect the memorial which he described as “a cowardly attempt to detract attention from the Horthy regime’s involvement in the destruction of the Jews and to homogenize the Holocaust with the ‘suffering’ of the Hungarians – a German occupation, as the record clearly shows, was not only unopposed but generally applauded.”

That same year, the Simon Wiesenthal Center declared that Hungary must choose whether it‘s committed to remembrance or distortion of the Holocaust: “it cannot have it both ways.” The blunt fact remains, that as things stand for Fidesz – Yes it can. For hubris knows no bounds, this regime is unbothered by inconsistencies and falsehoods; untroubled by ‘liberal’ qualms of conscience; and indifferent to international opinion.

At one and the same time, while Fidesz declares zero tolerance for the oldest hatred, war-time fascist writers are rehabilitated and statues unveiled; virulent anti-Semites are lauded and given prestigious state awards; fake historians are kept busy concocting and curating as they revise and relativize the most atrocious period in Hungarian history so that it functions “to strengthen national awareness.”

Opponents of the regime have been vilified on billposters and state-controlled media with words and imagery that hark back to the 1930s, as Orbán keeps his 2018 pre-election promise to exact moral, political and legal revenge upon his enemies. In terms that go way beyond anti-Semitic dog whistles, Orbán notoriously described the enemy as “not national but international; does not believe in working but speculates with money; does not have its own homeland but feels it owns the whole world.”

Back in 1944, at the mercy of his captors on a forced labour march, the Jewish writer Ernö Szép, wrote of the sheer stupidity of antisemitism; he reckoned that more offensive than the physical brutality was the one meted out to one’s intelligence:

“To have to swallow this thick spate of idiocy, to breathe this filthy smog instead of clean air; all these lies, all these stupefying inanities. To look on helplessly at the mental degradation of this country blessed with such human resources and talent, to witness this atrophy of reason, spirit, humour. What explanation for otherwise intelligent people believing these wild inanities?

When would we ever recover from the damage done to the mind and soul of this nation?”

The answer on this 75th commemoration of the liberation of Auschwitz, is sadly for Hungary, not for some time yet.