The deep roots of Islamophobia in the Conservative Party

During the Conservative Party leadership election last year, Sajid Javid put his fellow candidates on the spot: will you agree to an inquiry into Islamophobia within the party? Boris Johnson agreed, and after delays and prevarication, an inquiry was launched earlier this year.

Today, HOPE not hate is publishing our submission to the inquiry.

In recent years, HOPE not hate has tracked, highlighted and campaigned against the poison of hatred impacting individual political parties. None have been immune. For several years, there have been well-documented incidents of Conservative Party MPs, councillors and locally-elected representatives engaging in vile racism, particularly towards Muslims. Muslim members have reported a lack of action when they complained. Many have resigned from the party in protest.

In June 2019, following media coverage of Islamophobic incidents within the Conservative Party, HOPE not hate commissioned YouGov to poll Tory Party members. We wanted to understand how they viewed British Muslims, Islam more generally, and the issues of Islamophobia within their party. The full results were alarming. To assist with our submission, we have commissioned new polling of party members, carried out by YouGov, whose polling of Conservative Party members is widely considered to be the gold standard and which has been cited, or praised for their accuracy, by The Times, The Telegraph and ConservativeHome.

The poll found that there continues to be widespread suspicion, prejudice and hostility towards Muslims amongst Conservative Party members. Amongst the poll’s The polling alarming, and depressing, findings:

Conservative Party members hold significantly more negative attitudes towards Muslims than the general public. In a separate poll commissioned by HOPE not hate, YouGov asked the same questions in a national poll. Just under a third of the general public (30%) thought Islam was a threat to the British way of life (compared to 47% of Tory members), while 37% of the public thought that there were no go areas where non-Muslims could not enter (compared to 47% of Tory members). Conservative members were more than doubly as likely to think that Islamist terrorists reflect a widespread hostility to Britain amongst the Muslim community than in the national poll.

Distressingly, Conservative Party members refuse to believe that their party has a problem with Islamophobia:

The polling represents a huge challenge to the party’s leadership, demonstrating that Islamophobia is a widely spread view within the party’s membership. This is underlined by the continued inaction, or tepid action, against members – some of whom are senior members – who engage is outright Islamophobic activity.

On 26 November 2019, the Prime Minister denied claims that the Conservative Party’s complaints process was ineffectual, saying “What we do in the Tory party is when anybody is guilty of any kind of prejudice or discrimination against another group then they’re out first bounce”. This unusual turn of phrase is somewhat open to interpretation, but it was widely taken as meaning that the Conservative Party would expel members who were guilty of prejudice or discrimination, and that a single instance of such behaviour would be enough to merit such an action. Yet there is considerable evidence to show that Mr Johnson was wrong in this claim, whether or not he was aware of it.

For our submission to the Inquiry, we collated forty examples of cases where prejudiced and discriminatory actions by Conservative Party officials, activists and members have resulted in either short term suspensions or no action at all. It is important to stress that these case studies are far from an exhaustive list. Some high-profile cases were not highlighted because they have already received widespread media attention. We were only able to include such cases as were reported in the media or otherwise brought to our attention; it is impossible to know how many similar cases go unreported. What is clear from these case studies is that the Party’s complaints process is not working: it is not robust, it is under-resourced, it is arbitrary and open to political interference, and it is lacks the transparency required to build trust with those impacted by the actions of Islamophobic members.

In our submission, we offer to assist the Conservative Party in improving their process, and in strategising how to combat the high levels of Islamophobia within the party. We also recommend that:

Our polling and the case studies included in our submissions should send a wave of alarm through the party’s leadership. While the party’s leading figures have been keen to rightly call for Labour to do more to tackle antisemitism within its own ranks, with a few admirable exceptions, they have been less eager to call out racism within their own party. It is not good enough to only oppose racism when it is also politically expedient to do so. Whether the party – from it’s leader on down – is serious about tackling Islamophobia within the party will be measured not by warm words but by tangible actions, starting with an admission that the problem exists in the first place. 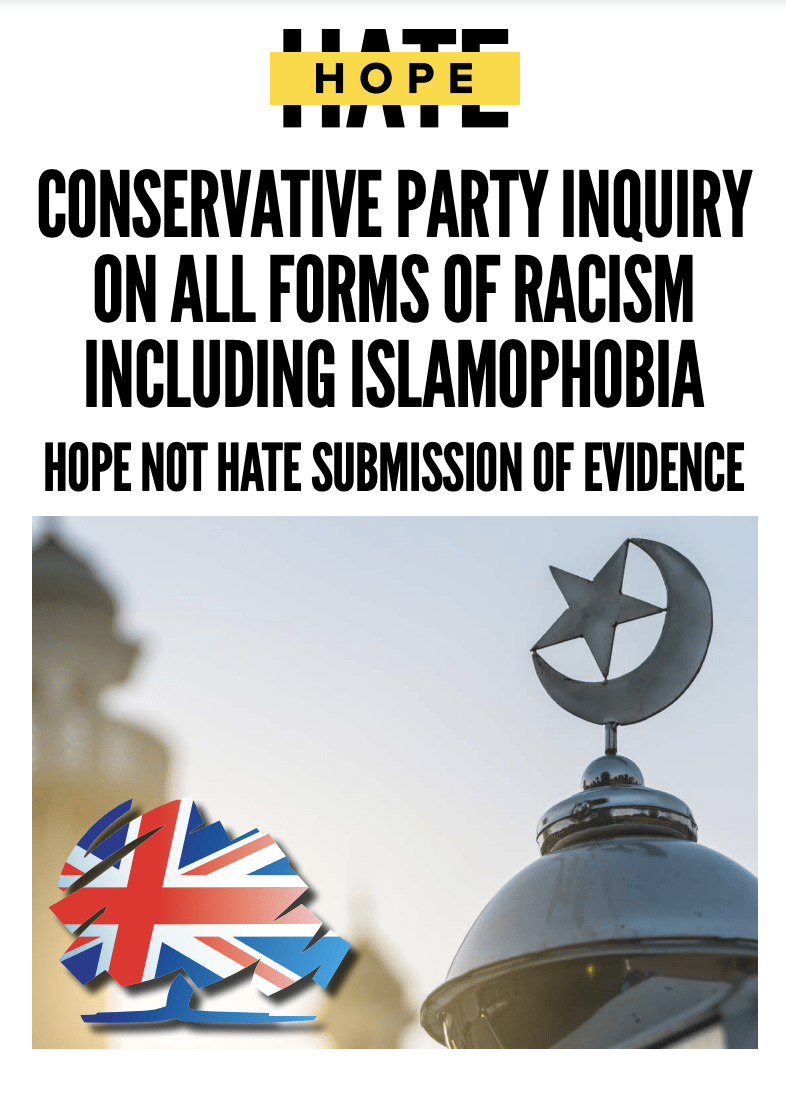 Islamophobia in the Conservative Party

Read our full submission to the Singh Inquiry
Download