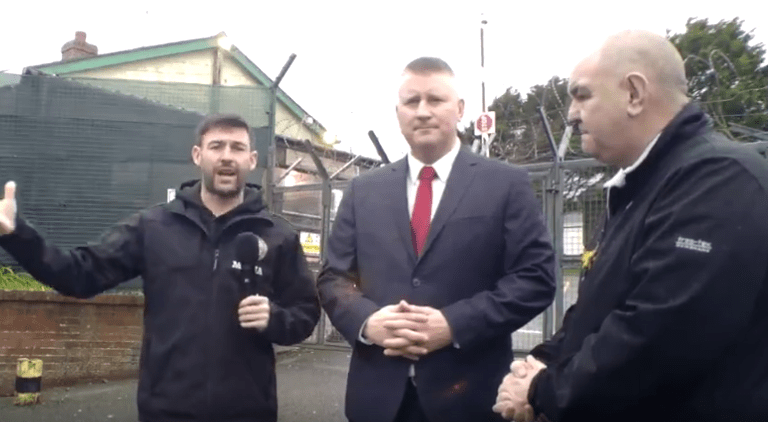 1
The far right in Blackpool: Britain First have been trying to capitalise on the murder of schoolgirl Charlene Downes, a BNP campaigner has been convicted of the murder of teenager Paige Chivers, and we helped put Jack Renshaw in jail after he was exposed as a paedophile.
  

Unable, seemingly (so they keep claiming in their begging letters) to register themselves as a proper political party, Britain First have been sunning themselves in Blackpool on the egregious Charlene Downes case.  You can read some of the history of the awful life Charlene had here. The Times also covered extensively what life was like for the child.

It smacks of desperation on the part of Britain First because their leader, ‘Pontiff’ Paul Golding was a member of the British National Party (BNP) when they too tried to make political capital out of that tragedy.

The BNP had to recuse themselves from campaigning with and for the Downes family when it became a political embarrassment.  None more so ‘embarrassing’ for the BNP was when two local neo-Nazis- one a member of the local party and had campaigned with the BNP in Blackpool, were convicted for the rape and murder of another missing Blackpool teenager, Paige Chivers. Chivers’ father was also murdered but rumours he was about to or threatening to expose a paedophile ring (not operating out of local kebab shops as the far right protested, but actually operating among white locals) can now never be substantiated.

Long-standing rumours at the time about Blackpool BNP being a paedophile gang involving drug dealers and hoteliers were seemingly further confirmed long after the local group had disbanded when the actions of another local BNP man, Jack Renshaw, came to light.

Renshaw was obsessed by paedophilia and often spoke about hanging or killing paedophiles.  Charlene Downes’ mother, Karen, often talked about killing Muslims, or as she prefers, ‘MUZZIE Vermin scum’. Mrs Downes was very upset when Renshaw was ‘harrassed’ by the local police.

Harassed by police or not, Renshaw would later be exposed as both a paedophile and a wannabe murderer. Of course, not to blow our own trumpets, it was someone working for HOPE not hate who helped jail Renshaw and save the lives of an MP and a police officer.

Keeping Britain First members distracted and in a constant state of panic and anger is a good way to keep Britain First both flush and agitated. And they have to be; four meals per day at The Wetherspoons, as is their leader’s want, have to be paid for somehow and thankfully, there are no less than four branches of Golding’s preferred ‘hot desk’ in the town.

Britain First have actually launched a campaign to demand a public inquiry into the murder of Charlene Downes. Sadly, this campaign is likely to consist of them farming email addresses and cash, but I and many, many others would also like there to be a public inquiry.

The lack of real politicking by Golding and Britain First is probably borne out of the realisation there is little immediate future for fascists at the ballot box. Like Mark Collett’s quickly sinking ‘Patriotic Allotment’ there really seems little point in registering with the Electoral Commission even if Golding and Collett seem incapable of doing so.

Jayda Fransen, Golding’s former deputy, fiancé and punchbag is so disinterested with politics that her British Freedom Party (a party name she literally wrestled from dead fascists) has not even bothered to apply to the Electoral Commission to register as a political party. Instead, Fransen is simply standing everywhere she can as an independent with millions of leaflets to dispense via Royal Mail. But all is not well in Fransen’s camp. Coupled with her frustrations is a campaign to have monies donated to her non-party by former members who were never really members, returned. Given that she is in bed (metaphorically) with Nick Griffin and Jim Dowson, there really is more chance of getting blood out of a stone than those two. Ask Fransen, she should know…

Billy Charlton, formerly of Seaham, now of Gateshead, is appearing at Newcastle Crown Crown court accused of one count each of making and distributing an indecent image of a child on June 28, 2018.

The jury were told on Monday that Charlton had admitted two further charges of possession of extreme pornography in June 2019.

One image depicted a person in sexual activity with an animal and the other an act ‘likely to result in serious injury’.

Prosecutors claim William Charlton, known as Billy, forwarded the illegal file, that had been sent to him by someone else, to 47 people in a distribution group over a messaging app on his mobile phone.

The 56-year-old claims he did not view the 18-second video clip, which featured a boy aged between 10 and 14 and an animal, before he forwarded it on and had no reason to suspect its contents were illegal.