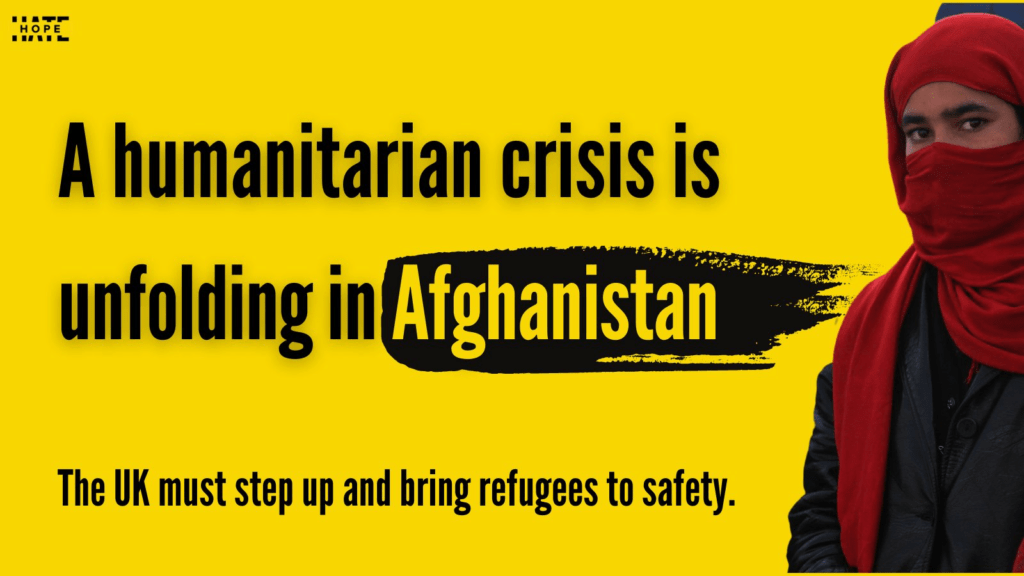 Safya Khan-Ruf looks at the far right reaction to the Taliban takeover of the country, and warns about far right attempts to poison public opinion against refugees from the conflict

1
Within the western world the far right has taken a positive viewpoint on the Taliban take over. US white supremacists have praised what the Taliban have accomplished, seeing them as a worthwhile insurgency model.
  
2
Patriotic Alternative, a white nationalist political group, pushed a “Write to your MP” action for its followers, to express concern over the proposed resettlement of Afghan migrants in the UK.
  
3
Britain First, a counter-jihad street protest organisation, supporters were especially vocal over the fate of Afghan women, from being banned from sports to their strict new dress policies.
  

When the Taliban seized control of Afghanistan after ousting the US-backed government, news of the disastrous evacuation dominated the media. American citizens being left behind, US weaponry and equipment in the hands of the Taliban and a bomb exploding at the airport – killing more than 90 Afghans and 13 US service members – was shared across social media.

Politicians from across the spectrum criticised the mishandling of the two-decade long War on Terror and the method of withdrawal from Afghanistan, with a former senior British intelligence official sharing on Sky news that this marked “the end of an era of Western liberalism and democracy that started with the fall of the Berlin wall”.

In the UK, a number of MPs have called for a formal independent inquiry into the UK’s conduct in Afghanistan – despite PM Boris Johnson dismissing the call. Former cabinet minister David Davis told The Independent there had been a “litany of disasters” over the past two decades in Afghanistan, saying: “Should there be an inquiry? Yes, there should.” Meanwhile, Tobias Ellwood, who chairs the Defence Select Committee, said “As soon as we’ve departed, there have been terrorist attacks,” he said. “And there will be further terrorist attacks because we’ve departed.” Tom Tugendhat, former soldier and the MP for Tonbridge and Malling in Kent described “The feeling of abandonment, of not just a country but the sacrifice that my friends made.”

GB News highlighted the lack of press freedom in Afghanistan sharing images of a newsreader in Afghanistan delivering the news with a guard standing behind him. Patrik Christy said on the channel, “Portraying the Taliban as anything other than a murderous, homophobic, sexist, extremist bunch of lunatics is dangerous”. He added, “We shouldn’t be giving the Taliban the benefit of the doubt.”

However, within the western world the far right has had a much more positive viewpoint on the Taliban take over. US white supremacists have praised what the Taliban have accomplished, seeing them as a worthwhile insurgency model. “The Taliban is a conservative, religious force, the U.S. is godless and liberal,” wrote Nick Fuentes, an influential far-right leader. “The defeat of the U.S. government in Afghanistan is unequivocally a positive development.” Another user in a Telegram far right group stated: “These farmers and minimally trained men fought to take their nation back from [Western neoliberals], they took back their government, installed their national religion as law, and executed dissenters. Hard to not respect that.”

In the UK far right, concerns over the withdrawal method vied with concerns on the consequences of the Taliban takeover.

Tommy Robinson aka Stephen Lennon, former leader of the English Defence League, expressed worry on Telegram over the weapons the US military left behind in Afghanistan, the increase in China’s power in the region as well as the abandonment of Western citizens. One supporter commented, “This has been the plan all along, Biden gave all our equipment to the taliban, which likely already gave it to China, Biden is purposely weakening our military so we cannot fight the Chinese and getting rid of any real Patriots in the process.” There was also a general anger amongst Robinson supporters over former members of Guantanamo Bay – exchanged for captured US soldier Bowe Bergdahl – being appointed in the Taliban caretaker government.

Patriotic Alternative, a white nationalist political group, also focused on the munitions, vehicles and weapons now in the hands of the Taliban. “When are the politicians who oversaw this mess being investigated and prosecuted for their part in this monumental failure?” The group also pushed a “Write to your MP” action for its followers, to express concern over the proposed resettlement of Afghan migrants in the UK. Videos on Telegram of the Taliban take over were numerous; focusing on the celebratory gunfire and the “humiliation” the Taliban had served Western allies.

Britain First, a counter-jihad street protest organisation, and For Britain, a far-right political party, shared several articles about the Taliban clashing with women protesters demanding equal rights as well as the Taliban taking control of Chinook helicopters. “Now the Taliban’s grip on the country is unassailable”. Britain First supporters were especially vocal over the fate of Afghan women, from being banned from sports to their strict new dress policies.

The primary concern for both groups was the resettlement of Afghan refugees and what it will cost British taxpayers. “We could tell them sod off because we’re full as a nation,” wrote one user. The fears were exacerbated by users sharing articles stoking fear about waves of migrations arriving in the UK.

One Breitbart headline shared on Britain First’s Telegram stated, “Thousands of Afghan migrants have fled their country since the Taliban seized control of Afghanistan. A huge migration is taking place across the Middle East aiming for Europe.”

For Britain focused on unemployment this migration would cause and criticising the Conservative government’s “Operation Welcome” that would “bring in tens of thousands of undocumented Afghans”. While feelings towards UK Home Secretary Priti Patel were mixed, reactions amongst For Britain supporters were particularly negative.  One user wrote, “At this stage in the game, you’d have to be a clinical moron to believe a word Priti Patel says. She is a pro-immigration extremist!”

“You may as well put a sign on the White Cliffs of Dover saying everybody welcome and you won’t be deported,” said Nigel Farage, leader of the Brexit Party and former leader of UKIP. He was particularly alarmist on GB News as he described the waves of Afghan migrants that would descend upon the UK. “Within a few weeks, migrants that cross the English Channel will all say they’ve come from Afghanistan. There won’t be a passport in sight!” he said. He also claimed Priti Patel had failed as Home Secretary.

Local councils were also criticised in different groups for welcoming Afghan migrants while councils that publicly refused any further migrants due to shortages in funding and space were praised. The idea that Britain was rushing to welcome thousands of migrants while veterans died homeless on the street was not only an established fact across different far right forums but also a source of great anger. James Goddard, far right activist, wrote: “Local councils are falling over themselves to offer lodgings and food to invading Mohammedans from Afghanistan. It should infuriate you, especially when you consider the local councils are quite happy to let British people rot on the streets, they’re happy to continuously increase council tax, whilst stripping away vital public services.”

Steve Laws, a far right “migrant hunter” who loiters around British docks to harass arriving migrants questioned both Priti Patel’s intentions and claims some Afghan evacuees have forged their papers. “If [Patel’s] hands are tied, she should tell us exactly who’s preventing her from doing it and why. Saying nothing, says everything,” he wrote. Other self-proclaimed “migrant hunters” Nigel Marcham (Little Veteran) and Tracey Marcham (xxTWxx) did not focus specifically on Afghan migrants on social media.

Comments in far right forums ranged from conspiracy theories to anxiety over an Afghan invasion of migrants. One popular conspiracy theory echoed in various forms was that US president Joe Biden was actively trying to destroy America/the West through his handling of Afghanistan and that the Taliban were helping China get more powerful.

UK far right supporters seemed less admirative of the Taliban take over than their US counterparts. However the Taliban take over was often compared to the British government’s COVID-19 vaccine strategy. As one user put it, “So the Taliban are forcibly imposing draconian sheria laws upon there people. OK Snap   The western are forcibly enforcing draconian cov19 scamdemic laws upon there people. Both take away freedom of choice. Both are dictatorial.”