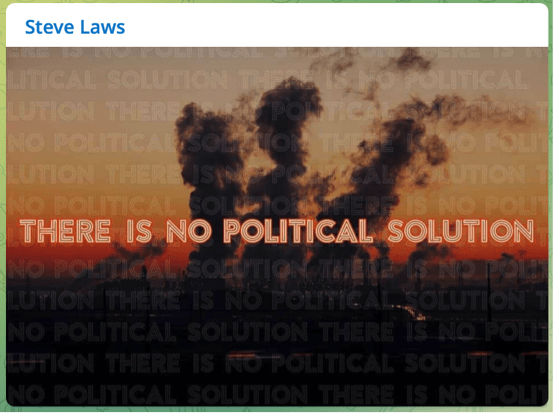 Over the past two years Steve Laws has risen to become a well-known figure in the UK far right. Despite this, when he was recently invited onto talkRADIO to discuss the issue of migrants, he was described merely as a ‘social commentator’, with no mention of his sharing of anti-Muslim posts, peddling of far right narratives and harassing of migrants.

He rose to prominence over the last 18 months or so as one of a band of ‘migrant hunters’ – individuals who film, harass and intimidate refugees, asylum seekers and migrants down on the South East Coast of England. Earlier this year, Laws also helped organise a demonstration in Dover attended by a range of people from across the UK far right, which ended in four arrests.

Laws is an active figure in creating and distributing content in online far right networks. He regularly shares posts from other far right individuals such as Tommy Robinson (Stephen Yaxley-Lennon) and far right groups such as Traditional Britain, Active Patriot and Britain First. His content can also be found in several far right groups including Patriotic Alternative, a white nationalist group. In December last year he recorded an episode on the “invasion” of migrants with the leader of the For Britain Party Anne Marie Waters on her podcast Deepwater. Laws is in fact a former member of the anti-Islam For Britain party.

He has repeatedly used dehumanising language such as “invaders” and “swarm” to describe migrants. “Days at the beach are being ruined by invaders. Our government does nothing. It’s a national scandal,” he wrote on Telegram in September 2021. Earlier this year, he wrote, “The Americans build a wall but open the gates and let them in. Then wonder why crowds of illegal immigrants try to swarm through.  Weak leadership all over the world is encouraging this problem to unprecedented levels.

Laws denies being far right, criticises news outlets that describe him so, and instead writes he highlights “illegal immigration”. He was arrested for trying to take one of the abandoned dinghies last year.

People on the far right often reject the descriptor ‘far right’ for several reasons. As Jean-Yves Camus and Nicolas Lebourg point out in Far-Right Politics in Europe: “The label ‘far right’ is practically never used by those who belong to it”. In some instances they do so consciously, trying to avoid the negative ramifications that come with it. However, in other cases it is because they don’t appear to know what ‘far right’ actually means. In Laws response video to a recent HNH campaign he said, “Far right activist? That’s a massive stretch,” and even used the fact that he played legos with his kids as proof that he was a “normal person”.

Whether or not Laws genuinely believes he isn’t far right is less important than the fact that he fits comfortably within almost any definition of it.

Steve Laws’ public persona on Twitter is sometimes relatively mild. Railing against lockdowns, jihadis and migrants does not necessarily make one far right. However, his Telegram is much more explicit about his views. In fact, when the website Left Foot Forward published “he shares anti-diversity, pro-Trump and ati-BLM content and promotes the ethnonationalist Great Replacement Theory”, Laws’ response was, “I stand by all of it”.

In July 2021, he posted two images of Birmingham in Telegram to support his theory white indigenous Britons were being replaced. The Great Replacement is an ethno-nationalist theory describing how the European indigenous white population is being replaced by non-white – and in particular Muslim – immigrants through declining birth rates and mass immigration; causing the destruction of society. Demographers have repeatedly stated there is no reliable basis for these long-term predictions. Moreover, the implications of this unfounded projection highlight his racist and anti Muslim stance, by assuming that, fellow non-white, Muslim citizens intrinsically pose a threat to Britain’s ethnic and cultural heritage.

Beyond his specific support for the Great Replacement Theory, general Islamophobia is rife across Laws’ Telegram channel. As well as sharing conspiratorial anti-Muslim content he also has a track record of ugly and base comments, for example calling the London Mayor “dirty Sadiq Khan”. He wrote in July 2021, “Christian woman stabbed by a Muslim man for wearing a Charlie Hebdo t-shirt. But yeah, religion of peace or some bullshit.”

While there is absolutely nothing wrong with opposing Islamism or even criticising Islam itself, much of what he writes on Telegram about Islam and Muslims is indistinguishable from the beliefs and rhetoric of the anti-muslim ‘counter-jihad movement who believe that secular, liberal society and a supposedly complicit “mainstream media” are aiding Islam through mass immigration into Europe and squashing any criticism of the religion.

Another clear indication that Laws’ is far right is that he has shared a post stating, “There is no political solution”. It is a cynical and pessimistic message used by accelerationists. HOPE not hate researcher Patrik Hermannson writes there are several non-violent ideological variants but that “the version that has grown to prominence within the far right is defined by its view that society is on the verge of collapse and beyond repair. Any attempt to prevent the collapse only stalls the inevitable for a little while and serves to hold up a morally corrupt system. Accelerationsists therefore see instigating (or accelerating) a complete collapse through violent conflict as the only way forward, after which a new order can be built.”

The issue of migration in the UK is complex and people are understandably opinionated about it. However, it is unwise to allow a member of the far right onto a mainstream platform such as talkRADIO, to discuss this multifaceted issue with Kevin O’Sullivan without his leanings and affiliations explained to the listeners. Steve Laws may deny he is far right, but his public persona paints a different picture – one that is anti-Muslim and involved in far right activities, narratives and ideas.