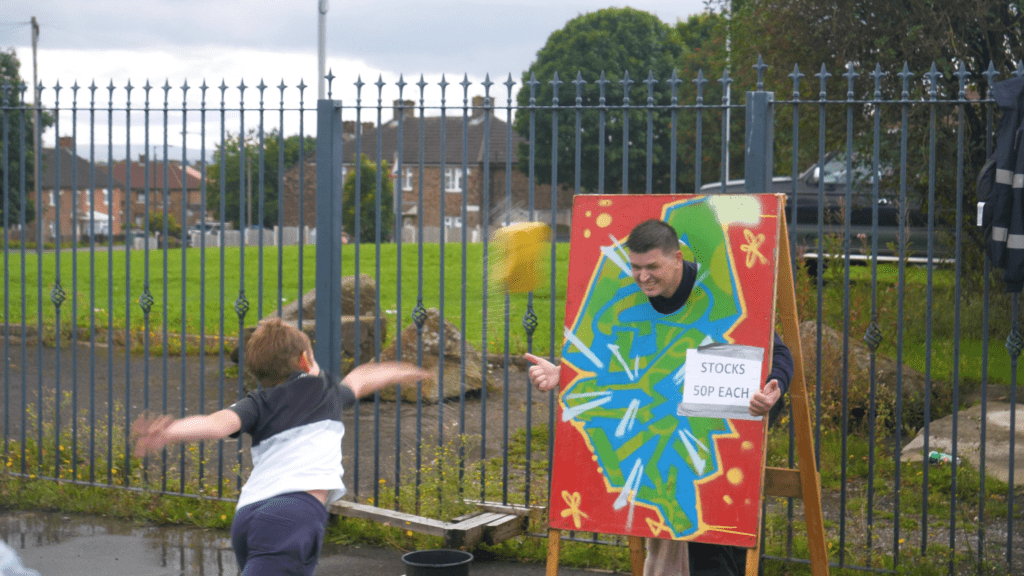 Over 500 people, most of them families, braved heavy rain to attend a HOPE not hate fun day on the Buttershaw estate in Bradford in late August. Called Buttershaw by the Beach, the event, organised in partnership with the Sandale Trust, which runs a community centre on the estate, is just the latest initiative we have held in the area.

As the name suggests, the fun day was an opportunity to bring the seaside to a deprived working class estate in south Bradford, during a time when because of the Covid restrictions few people would have been able to get away. There were events for all ages and Jamaican and Syrian food to eat.

“Residents really enjoyed the fun day and were happy that there was lots of free stuff for the children,” says Paul Meszaros, the HOPE not hate organiser who helped arrange the event. “The main compliments for the day was the food from different cultures which people really enjoyed.”

Buttershaw has long been a focus of HOPE not hate’s community work. An area with serious economic and health deprivation, it has long been targeted by the far right. Rather than simply going onto the estate to lecture people about racism, HOPE not hate’s approach is to engage with local people, win their trust and then introduce new ideas to challenge their existing views.

“The point of our interventions is to help make people’s lives better as well as continuing to promote a consistent anti-racist message,” adds Paul. “People will rightly tell us where to go if we just turn up at election time and lecture them how to think and vote. We have to prove that we are on their side.”

HOPE not hate has been working on the estate for four years now, but our involved only increased during Covid. “During the pandemic we teamed up with a local community centre to establish a food bank and delivered hot meals and shopping to the elderly and others who were shielding,” remembers Paul.

According to Andy Walsh, who runs the Sandale Community Centre, the food bank has distributed 10,000 food parcels and 15,000 hot meals for local people in the last 15 months. An amazing achievement only made possible by the generous support of HOPE not hate supporters, who donated £7,000 to the project.

In the run up to the fun day, we produced 10,000 copies of an 8-page tabloid newspaper, which not only promoted the event but profiled local projects that people could get involved in, promoted health and youth services and highlighted good community projects and stories.

“The paper went down really well,” reflects Paul proudly. “Everybody who commented said they thought it was really good. They particularly liked the localised content. Andy [Walsh] went to a chippy in Wyke and the man said, ‘I thought you were bringing me the next paper, it was really good’.

“Comments like that are really encouraging.” Plans are already underway to bring out another edition of the community newspaper before Christmas.

Paul and his team have exciting plans for Buttershaw. Working with local people they want to do a proper audits of the need of the local community and then start campaigning for them. They also want to ensure local people take up health services and benefits that are available to them, but often under-used. “If we can deliver for local people,” says Paul, “then they are much more likely to listen to what we have to say on racism and the far right.”