Despite ten years of attempts by social media companies to regulate and moderate hate speech, antisemitism is rife across every social media platform according to a ground-breaking report by HOPE not hate, in collaboration with Expo Foundation and the Amadeu Antonio Foundation. This research showcases how antisemitism is most commonly and widely spread through conspiracy theories, which saw an unprecedented rise in popularity during the COVID-19 pandemic. 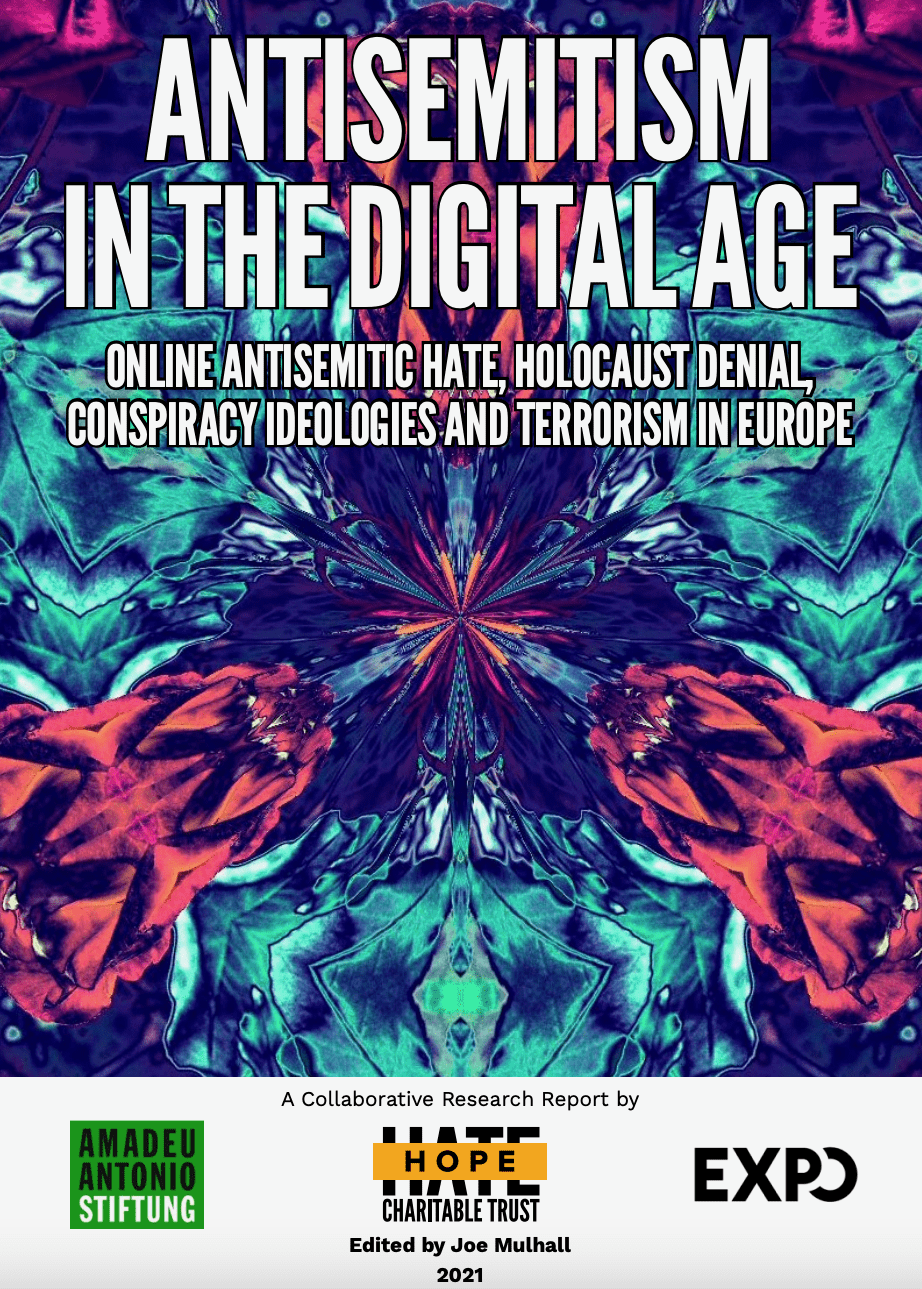 In Chaim A. Kaplan’s diary, documenting his time in the Warsaw Ghetto during World War II, he wrote “If you want to know the character of any nation, ask the Jews.” By this he meant that the experiences of the Jewish community can act as a signifier of a country’s tolerance and openness or, sadly more often, lack thereof. While making no comparison to the unique historical tragedy that was the Holocaust, it is similarly true that one signifier of the health of the internet and social media platforms more specifically is the experience of Jewish people on them.

Antisemitism is often called the oldest hatred due to its history dating back thousands of years. Across the millennia the core prejudice and hatred has remained constant but the form and lexicon of antisemitism has often changed and updated to reach new audiences in each new century and for each new generation. The same is true of the digital age. The internet and social media platforms have not created antisemitism but it has affected its nature and the means by which it is developing and is disseminated.

This report, a collaboration between the Amadeu Antonio Foundation in Germany, Expo Foundation in Sweden and HOPE not hate in the UK and funded by Google’s philanthropic arm Google.org, sets out to explore the state of antisemitism online in Europe. Bringing together experts from around Europe it offers an extensive survey of online antisemitism across a variety of online spaces. It sets out to explore two core questions: How is antisemitism being affected by the internet and how do different online spaces affect the nature of the antisemitism found within them?

Over the centuries the Jewish people have been blamed for every historical tragedy and crisis ranging from the death of Jesus, the poisoning of wells and the ritual murder of children, through to the Atlantic slave trade and the 9/11 attacks. Perhaps unsurprisingly, during the current global pandemic it is once again Jews that some conspiracy theorists are blaming. The supposedly secret hand of Jewish power has been identified as the cause of COVID-19 by antisemites around the world. This report explains this latest update to the ancient antisemitic conspiracy theory with a focus on the role that various social media platforms played in its development and dissemination.

Conversely, if antisemites blame Jews for tragedies they didn’t commit, they also deny tragedies experienced by Jews themselves, foremost being the denial of the Holocaust. While Holocaust denial has existed since the 1940s, this report explains how the tone of contemporary denial is changing to reflect the style and culture of the online spaces in which it is being articulated. There was a time when antisemites dedicated their entire lives to disproving the Holocaust through pseudo-academic books and articles, but increasingly today, in the digital age, younger deniers seek to dismiss it, ridicule and mock it or even semi-ironically celebrate it. This reflects the ironic, humaristic and consciously offensive culture within some online spaces.

At the core of this report is an expansive exploration of antisemitism across nine social media platforms or websites. These include mainstream and extremely large platforms like Facebook and YouTube, as well as alternative platforms like Parler and 4chan’s /pol/ board, which are mainly used by those with far-right sympathies. We define social media platforms broadly and include YouTube, Reddit and 4chan /pol/, as these allow not just the dissemination of content but interactions between users, and thus can be considered social. Here we set out to understand how the moderation policies, algorithms and terms of services of different online spaces affects the nature of the antisemitism we found on them.

The most worrying finding of this report is that we found antisemitism on every platform we explored. While the quantity of the different types of antisemitism varies between platforms, it remains possible to locate all forms and extremes of antisemitism on all platforms. Despite a decade of discussion and policy changes by platforms there is no platform currently available where antisemitism and hate speech more generally is not easily found.

The findings of this extensive report should act as a reminder of the adaptability and ineradicability of antisemitism. It also further proves that major tech platforms have created online spaces where antisemitism has been allowed to flourish with tragic and long-lasting effects, not least terrorism against Jewish communities. However, this report should also offer some hope. It finds that tech companies can and have taken steps which significantly minimises the amount and severity of the antisemitism on their platforms. Clearly, much more needs to be done and with the increasing growth of online platforms actively designed to host, defend and disseminate hate speech such as antisemitism, effective legislation is required to tackle this problem.

Antisemitism has lasted thousands of years and changed countless times to survive new and different environments. If the horrifying revelations of the Holocaust did not bring an end to antisemitism then it seems unlikely anything will. However, the way we can minimise the deadly and dangerous effects of this ancient prejudice is by fighting it wherever it is found, both offline and online, and we hope that this report contributes to the understanding of the problem and offers some solutions.