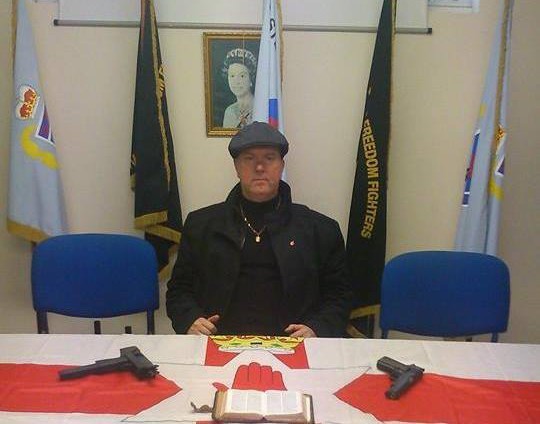 Frank ‘Pepperoni’ Portinari has tried his hand at many things since the signing of the Belfast Agreement in 1998. The agreement, also known as the Good Friday Agreement, brought (ostensibly) an end to the terrorism that had blighted the north of Ireland for some forty years.

In Britain, the interests of Loyalist Paramilitaries who were fighting a war to keep Northern Ireland under British control-and to counter groups like the Irish Republican Army (IRA), were often taken care of by a swathe of individuals not always particularly trustworthy or even up to the job. Many were linked to extreme far right groups, often making the Loyalist Ulster Defence Association (UDA) in particular, appear to antifascists as little more than the armed wing of fascist groups like the National Front (NF) or the British National Party (BNP).

The UDA’s problems in Britain were most challenging – if not peculiar. Considered the largest paramilitary group in western Europe, in Britain not only did their ‘bag money’ (proceeds of fundraising and merchandise sales) often not turn up in the group’s coffers in Belfast- their supporters and members in England were an embarrassment. At one stage as the UDA desperately fought off accusations they were little more than a fascist hit squad, their interests in England were under the control of Nazi Skinhead singer Ian Stuart Donaldson, of the band Skrewdriver.

In the early nineties, as Ireland and the rest of the world wondered if the war between Loyalists and Republicans could or would ever end, the UDA had a sickening stroke of luck when their terrorist campaign was offered considerable help from the police service in Northern Ireland at the time. It’s now official; the UDA were aided and abetted by agents of the state in their murder campaign.

Not only was this help a magnificent stroke of good fortune for the UDA , in England, after decades of incompetence and plastic do-nothing ‘Commanders’, their interests fell under the control of Frank Portinari, a school caretaker and former National Front member based in Camden, north London.

A football hooligan who actually held down a job (for a change), Portinari was also close to another terror group, the neo-Nazi Combat 18 (C18). That gang, led by ‘Commander’ Portinari’s friend-the future murderer Charlie Sargent, were themselves delighted to make these connections. C18 had morphed into a criminal drug gang. Many of their senior members, including it is alleged Sargent, were passing information on the activities of the UDA in exchange for a green light for their drug and other nefarious activities.

Portinari was no slouch. And it wasn’t long until he was trawling the bars and pubs of South East London for firearms no longer wanted by the armed robbers of Rotherhithe to help his masters, in the words of the judge who later jailed him, add to the tally of senseless and sectarian murders in Northern Ireland.

But Portinari’s ambitions didn’t end there. As well as hiding guns in his primary school, he recently told an Irish newspaper he would have even considered fire bombing the Camden Irish Centre!

Portinari was caught with his guns in 1993 when he handed seven guns, including revolvers and semi-automatic pistols and about 240 rounds of ammunition to a man in a Birmingham car park. He was arrested on the spot. He was sentenced to five years in 1994.

Since being released from prison, Portinari has tried everything to keep his flame and image alive. He’s been known as “The Doorman” (he’s never actually worked the doors to my knowledge-except at a rather special private party in Thanet once), “The Guvnor” and has even banged the drum in a “kick the pope” band. As a just reward for his loyal service, the UDA took him to Dublin (of all places) to meet the Queen (of all people) in 2011. The fall out from that, and a series of faux pas including some UDA leaders accepting Irish passports, was one of the signals for the UDA to have another in a long line of acrimonious splits.

For the last couple of years, Portinari has been doing podcasts, talking about all manner of dubious and hard to believe things. But, now a storeman in Chelsea, Portinari is a convicted terrorist after all. So, kudos, one supposes.

In 2017 Portinari released his autobiography. It’s readable, but not exactly full of excitement. Unlike the podcasts he seems to be now addicted to. He has also taken to hosting ‘gangster tours’ on a bus around London, much to the bemusement and some chagrin back in Belfast, where the UDA absolutely refute links to gangsterism. Never mind. Frank has to make a living, and as well as a football hooligan, barrow boy, storeman, caretaker and terrorist, the 63 year old now wants to be a gangster.

There’s surely only one thing left for him to do; yes, join the Royal Ballet? Well, not as yet. Frank has decided his life must now be told by the medium of film and the only way to make sure it includes everything, including his never previously mentioned time in the “trenches” is to do it himself. With only 20 days remaining to find the £25,000 the “gangster” feels it would take to turn his life into a documentary, Portinari has had to concede perhaps, for once, this well has been finally bled dry. “So far the response to this appeal has been been pretty dismal” he laments. “I can only assume the people are disinterested in the project.” So far, he has only raised £554.

Given Portinari spends so much time in the sunshine, perhaps he could drop the vanity project and simply do a travel programme for his followers; live from Corfu next time he pops up there.