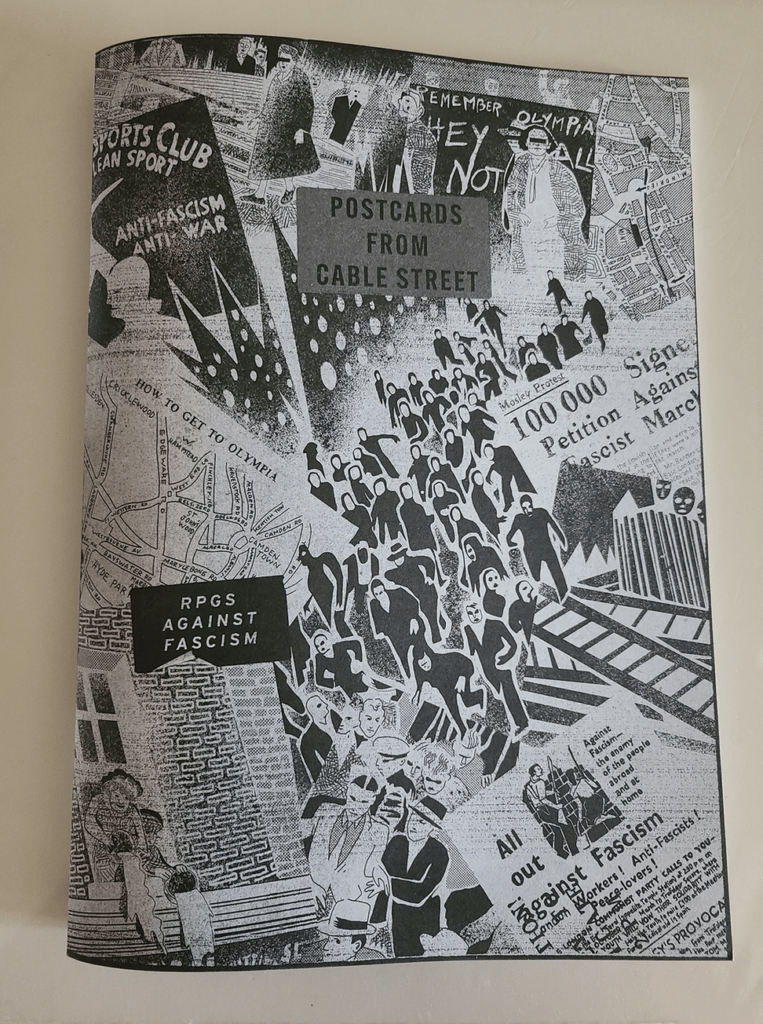 Nick Spooner caught up with Luke Gearing, one of the creators of an antifascist zine raising money for HOPE not hate and Football Lads & Lasses Against Fascism.

The indie gaming scene might not be a community with which we are completely au fait here at HOPE not hate, but it’s one we have come to learn more about recently courtesy of an amazing fundraising project called ‘Postcards From Cable Street’.

Luke, Sam, Zach and Jarrett – the core group behind this 40-strong, international antifascist game anthology – found each other online, united by a shared frustration at the amount of prejudice that lies beneath the surface in the broader gaming scene. Disgusted at the bigotry and the gatekeeping, the four found they had gravitated towards the indie gaming community instead; a space that is more globally distributed, less hierarchical and far more welcoming overall.

“Indie gaming is extensively networked”, says Luke as we chat to him over video one morning, “historically there’s not been an even distribution of access to [crowdfunding platform] Kickstarter, and not everyone can do every part of game construction themselves so it ends up being really collaborative”.

As a result, a sizeable community has sprung up within indie gaming around zines. They are, says Luke: “faster, scrappier, with a lower environmental footprint, low stakes and are now the standard way to publish indie books. Really they have democratised the production of games”. They also are more attractive to creators who don’t have the resources to produce a game in the form of a huge book; something that had previously been a major hurdle for gamers.

“There are games, there are adventure-style pieces, there’s stuff that’s game-adjacent, there’s loads of experimentation and an interview too,”

‘Postcards From Cable Street’ is a project born from this diverse, networked indie gaming community. It is a gaming anthology with no overarching narrative per se, but broadly defined by its stance against prejudice and the desire of its creators to raise funds for antifascist causes. The diversity of the creators is mirrored in the anthology’s content, resulting in wide variation across the publication’s pages. “There are games, there are adventure-style pieces, there’s stuff that’s game-adjacent, there’s loads of experimentation and an interview too,” says Luke. There’s also a suggested soundtrack, complete with the legendary and uncompromising Napalm Death cover of ‘Nazi Punks Fuck Off’ by the Dead Kennedys.

Luke’s love of gaming traces back to his dad, a keen Dungeons & Dragons fan who passed the passion onto his son. At school. Luke built up a collection of mates with whom he spent many hours each week gaming, before getting into blogging and making zines to make some money to buy cigarettes. A modest and lovely guy, Luke has begun to build a bit of a name for himself in the indie scene and has produced 5 books at the time of writing. Given the amount of effort that has clearly gone into ‘Postcards…’, this is no mean feat at all.

Although he was working on the organisation and editing of ‘Postcards…’, Luke still found the time to produce a piece for it himself. The Valley is a strategy and fantasy game concerning a rural community living in a valley that needs to defend itself from an invading army advancing from the south. The army, desperate to know the community’s weaknesses and secrets, sends out scouts to see if the community is easily defeatable, but they just might have bitten off more than they can chew….

A big thank you to Luke, Sam, Zach, Jarrett and all the creators for their work producing ‘Postcards From Cable Street’; a truly unique fundraiser for HOPE not hate!

‘Postcards From Cable Street’ can be picked up through Soul Muppet Publishing.

If you’re based in the US, it might be cheaper to grab it from Exalted Funeral.