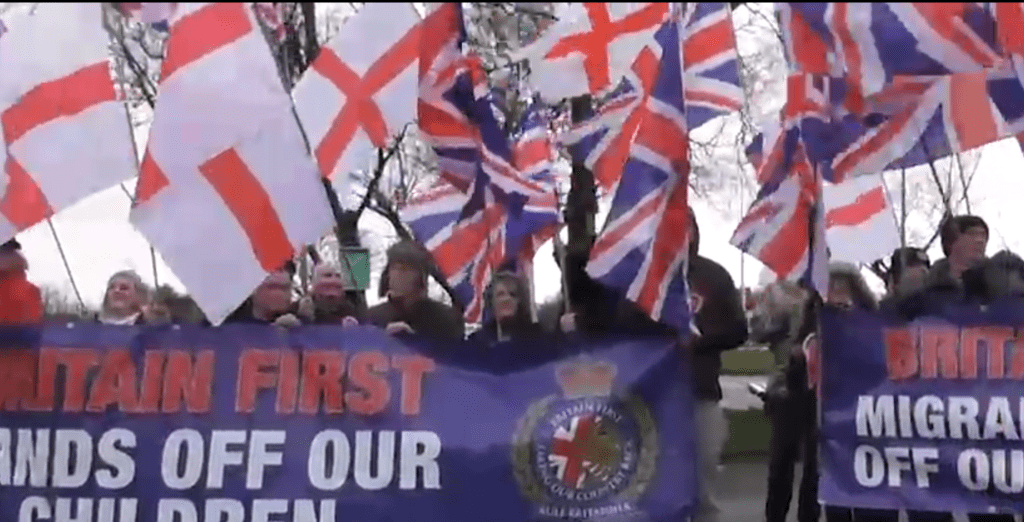 This year, a record number of migrants will attempt to cross the English Channel to get to the UK. According to Border Force Union officials, this could reach 60,000 – more than double last year’s figure. While the number of immigrants arriving in the UK is a fraction of those who flee to Europe, Britain First has long attempted to convince the electorate that the country’s social and economic problems are all due to mass migration, especially non-white and Muslim migration. The group’s ideal solution is to reduce immigration drastically, deport all illegal immigrants and asylum seekers and encourage legal immigrants to leave the country. Its tactic, however, is to film activists harassing asylum-seekers and security guards to create social media content.

The camera jolted across the Christmas tree in the foyer at the Holiday Inn before moving swiftly towards the canteen where asylum seekers were quietly eating their breakfast. The Britain First member behind the camera accosted several people, asking them where they came from, whether they were waiting for housing and how long they had been in the hotel. Some of the asylum seekers smiled, others simply answered before a security guard intervened and the activist was told to leave the premises.

This is a typical scene in the 79 videos that members of Britain First filmed at hotels they suspected of housing asylum-seekers since the start of 2021. The UK government is responsible for housing migrants while their asylum claim is processed and they are placed in various types of accommodation, including hotels and bed & breakfasts across the country. Often, the Britain First activists attempt to get into the accommodation by not identifying themselves accurately, and shouting phrases such as “We’re just reporting!” However, their hate of migrants is evident on the group’s social media channels, which are awash with language describing asylum-seekers as “fighting age men”, “invasion”, “rapists”, “swarm” and “criminals”. One message on Telegram reads: “Ready for battle! Defending British children against migrant rapists!”

Immigration has always been a central issue for the British far right and various supporters have been active in this area. According to official statistics, there are currently up to 16,000 asylum seekers in temporary accommodation including hotels, hostels and disused military barracks across the UK while they await longer- term housing.

Britain First messaging focuses on painting asylum-seekers as potential terrorists or sexual predators. The group uses Islamophobic narratives about a “Muslim takeover of Europe” and regularly refers to the “Great Replacement” – a white nationalist conspiracy theory that states the ethnic white population is being demographically and culturally replaced with non-white and specifically Arab and sub- Saharan Muslim populations through mass migration and demographic changes.

Britain First supporters have held multiple demonstrations in front of migrant hotels – including several at the Britannia Hotel in Standish near Wigan. However, most of their hotel videos are a smaller group of Britain First members entering the migrant accommodation without permission and harassing the personnel.

The videos are posted on its website and Telegram channel under the title “BRITAIN FIRST EXPOSES… “ featuring orchestral film music as background. The posts always include details on how to follow, join and donate to the group. On Telegram, these videos are some of the most viewed posts on the Britain First channel – regularly accruing 15,000 to 25,000 views. Other posts usually garner a few hundred to a thousand views.

Britain First Leader Paul Golding, Chair Ashlea Simon and Regional Organiser Geoff Miles are some of the regular figures leading this harassment campaign. Britain First accounted for 41% of the recorded anti-migrant visits since the start of 2021. The group carried out 54 of the 125 anti-migrant hotel visits recorded in 2021, and 25 of the 69 visits from January to June 2022.

The level of harassment at migrant accommodations varied depending on the anti-migrant activist and how the hotel staff handled the confrontation. A Britain First activist was arrested, and later convicted of assaulting a security guard at a hotel housing asylum seekers after an altercation in 2020 (a retrial was ordered this year). At the Fairfield York Manor Hotel in April 2021, Simon and a gaggle of activists entered the hotel, shouting phrases like “Are you pleased with your job… you disgusting white liberals.” Hotel staff are routinely branded traitors by Britain First members, both online and in person for protecting asylum seekers.

Dover remains one of the key areas for migrant arrivals from across the channel, often arriving in small unsafe dinghies or rescued by the Royal National Lifeboat Institution. Dover is therefore one of the most popular destinations for anti-migrant activists. For several in the far right, filming the arrivals of migrants makes up the bulk of their online content. Golding and Simons have both produced video content from visiting Dover which is then shared widely on various messaging boards accompanied by hundreds of angry and racist comments.

The issue of cross channel migration will likely continue to garner headlines and cause debate and discussion as crossings increase. Due to the boost in views that hotel harassment videos give to anti-migrant activists, and the level of public information available on where asylum-seekers are residing, this harassment is likely to go up in 2022.